Physical Activities for Babies and Toddlers

Before kids reach kindergarten, parents can get them on the path to exercise and healthy habits. Try these ideas from two Detroit Public Schools teachers. 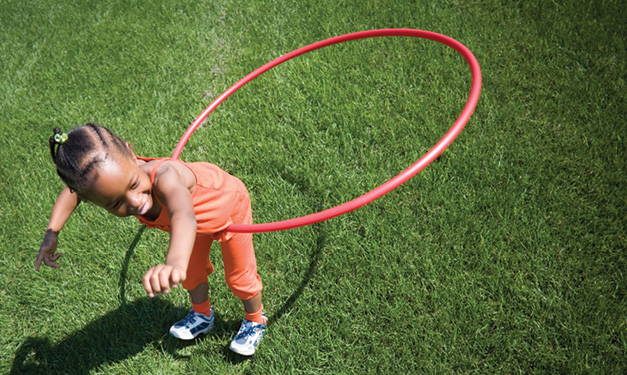 “Sit still” is not in most preschoolers’ vocabulary. And that’s a very normal thing!

Luckily, movement is also super crucial to their development, including those critical motor skills and setting a healthy beat they’ll hopefully sustain for years to come.

So what are some basics when it comes to physical activity for babies and toddlers – and nurturing it in your little ones, from birth to age 5?

Let’s start with a few tidbits about physical activity for kids ages 0-5.

Even before they crawl, babies benefit from guided movement, Hyde says. Gently “bicycle” their legs, bending them back and forth. Lightly turn their little limbs. Swing their arms. Rock them in your lap. When they’re old enough, build independent coordination with “head, shoulders, knees and toes.”

Setting boundaries – for example, no jumping on the couch or punching – is important, Butler-Hall says. But when it comes to toddlers, tumbles are just as key. “We learn to run on the grass,” she says.

“The kids fall every day. You still have to let them do that. That builds up their confidence and makes them better at running. They take risks – and we want them to take risks. Let them go.”

Got a groggy kid? Stretching out can be a morning benefit. “Wake up the mind, wake up the body,” Hyde says. Butler-Hall has kids stretch for 10 counts – touching their toes, reaching as high as they can, etc.

Here’s a bin-full of affordable essentials that will instantly get children moving.

It could be a light rubber ball, heavier basketball or a big exercise ball (the latter is a real kid-magnet, as tykes bounce, balance and, perched on their bellies, roll around on it). It’s one of Hyde’s top picks. Or clear the way, blow up a latex balloon and “Have child keep it up in the air,” she adds. “They’re constantly moving and there’s coordination going on.”

Grab one at the dollar store, Butler-Hall says. “It’s such a fun thing for them,” she says, yet “It takes a lot of skill. You have to practice. You can’t just give up.”

Other tips? Set up several hoops on the floor and have kids hop through them – or “hold it up like you’re the basketball rim” and have kids shoot hoops, she says (just use a soft ball in case you get smacked!).

It’s a retro workhorse: “You’re holding it and you flick it; you have to run to catch it,” explains Butler-Hall – there’s your fine and gross motor, all in one.

Fill a few empty 16-ouncers with a bit of water or rice, Hyde says – just enough so they don’t easily tip. Then, have kids roll a ball toward them. “How many did they knock down? It becomes a lesson in counting,” she says.

Just fill plastic baggies or old socks with a few dry beans or grab a small teddy bear; anything a bit flat, Butler-Hall says. While standing, have kids balance it on their heads for a few counts. Next on one knee; then the other. Or challenge them to toss it into a bucket, Hyde adds.

Give kids a light scarf or piece of ribbon, says Butler-Hall, and crank up the jams. “Take any song on the radio. Move the scarves fast if it’s a Katy Perry song – or if it’s a slow song, they can move it slow. They can dance with them.”

Laid flat on the floor, this toy is also great for smaller kids to hop over (to secure it, stretch it out and tie it around two stationary things, like firmly planted table or couch legs). See where it goes – Butler-Hall has seen kids actually jumping rope by age 4, and sometimes even earlier.

No “stuff”? No problem. Get your kiddos moving on a dime.

Both teachers are fans of this method. Turn on tunes and do a motion – hopping, jumping, running, skipping, etc. Then, pause the music and hold that position.

“It’s like musical chairs, but you never get (tagged) out,” Butler-Hall says. “Music makes you wanna move your body. It has a certain beat to it so it keeps it on the certain rhythm.” And those movements come more naturally than you might think.

All kinds of walks

“Taking a walk is a wonderful thing,” says Hyde, a huge advocate of getting kids outside 30 minutes a day. “Red light, green light” is a hit. “As we walk, I say ‘green light,'” she says. “When I say ‘red light,’ they have to stop.”

Ultimately, they get to running. Or, like “freeze dance,” she’ll have a kid shout out a command, like run, hop, gallop or skip. Other variations: Go “I spy” style and call out shapes to spot (triangle roofs, rectangle windows, octagon signs) and take a “listening walk” (hear any birds? car horns?).

What day is it? Turn the answer into exercise, says Butler-Hall. “Take the number 12 and do 12 active things. Going up to 30 – even if they just stomp 30 times.” Slap your knees five times. Do 20 hand claps. “Make it fun.” It reinforces months and dates, numbers and, of course, physical activity.

Whether swings, slides or just strolling on the wood chips, your neighborhood playscape is a great resource (and walk destination). Hyde notes that, unless gated off, public schools’ structures are often open to neighborhood kids.

Finally, never discount this old-school game that’ll get tykes scurrying. Count to about 10 for the littler ones, Butler-Hall advises. “They don’t mind if you cheat,” she laughs, and “they usually pick the same hiding space inside.”

Keep the fun going by pretending to be stumped, wondering aloud, “Gosh, where did she go?” when your wee one squeals, in plain sight.

In moderation, you can even harness books, TV, the web and music to get active. Here are a few ideas.

Pick anything – from Five Little Monkeys Jumping on the Bed to The Snowy Day by Erza Jack Keats – and add movement to it. For example, kids can “roll over, roll over” or make footprints in the snow.

Search “gross motor skills” for “children,” “preschoolers” or “babies.” You’ll find anything from “ABC workouts” to stretching songs for little ones – even motions mimicking animals like elephants or frogs. Just be sure to check it out for yourself, first, to weed out anything off-topic!

Type “Kidz Bop” into Pandora.com for free, get-moving tunes from the kiddy compilation series. Greg & Steve is another popular music band for young kids; one of their new toe-tapping album is called Bounce & Boogie.

On both TV and its website, this Nick Jr. show aims to encourage a love of music through movement and dance. With your preschoolers, pump up the jams that band plays, mimic what you’re seeing on screen, or make up some moves of your own.