Obama Proposes Preschool Expansion in State of the Union Address 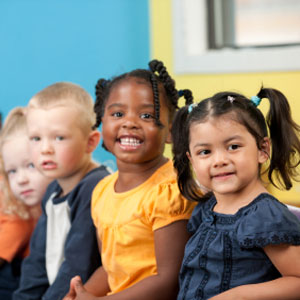 President Barack Obama put the spotlight on the nation’s 4-year-olds Feb. 12 in his State of the Union address. The president announced he wants to increase preschool enrollment by helping low- to moderate-income families afford the tuition.

“Every dollar we invest in high-quality early education can save more than $7 later on – by boosting graduation rates, reducing teen pregnancy, even reducing violent crime,” Obama said in his speech.

The key seems to be a “federal-state partnership,” according to a fact sheet on the president’s “Plan for Early Education for All Americans” the White House released the very next day.

While “low- to moderate-” income kids – specifically, those at or below 200 percent of poverty – are the prime focus, the plan also calls for “expanding these programs to reach additional children from middle-class families,” as well as “incentivizing full-day kindergarten policies.”

Also on the table is a new “Early Head Start-Child Care” partnership. (Early Head Start is a federal program that “serves infants, toddlers, pregnant women and their families who have incomes below the federal poverty level.”) The goal is to give competitive grants to communities that expand these programs for little ones from birth to age 3.

Finally, connecting parents in need with nurses, social workers and other “educational support” services is poised to get a boost, too: “Voluntary home visiting programs” are already being promised a $1.5 billion shot in the arm, with more to come.

The commander in chief made this case: “The Organization of Economic Cooperation and Development estimates that the United States ranks 28th out of 38 countries for the share of 4-year-olds enrolled in early childhood education,” Obama’s plan noted. “And fewer than three in 10 4-year olds are enrolled in high-quality programs.”

Compelling stats aside, instantly – and understandably – money became a hot-button issue. Obama’s plan offered this answer: “a cost-sharing partnership with all 50 states.” The idea, essentially, is that states must meet quality benchmarks to access federal funds.

The exact price tag, as perhaps expected at this early stage, is not spelled out. Though there’s evidence it may be necessary: States have sliced funds for preschool “an average of $700 per child over the last decade,” according to a Huffington Post report.

In his speech, Obama said additional costs are not a factor for any of the programs he spoke about during the SOTU address. “Nothing I’m proposing tonight should increase our deficit by a single dime.”

A savings of “over $1.5 trillion of mandatory and revenue savings” in the last federal budget gets some credit – at least in a Feb. 13 post-SOTU press conference.

And time may be running thin. “One of every 13 students already in Head Start classrooms” – which are focused on low-income kids from birth to age 5 – “is at risk of being kicked out if lawmakers don’t sidestep a budget meltdown,” NPR reported today, noting that $85 billion in automatic budget cuts are set to begin March 1.

Education leaders here at home are definitely worried that many kids aren’t getting the early public education “jump” they need to succeed.

About 38,000 of the state’s eligible 4-year-olds are “shut out” of public preschool due to funding shortfalls – that’s almost half the qualified kids – according estimates made in a May 2012 “Michigan Early Childhood Business Plan” (you can download the PDF here). Drafted and signed by the state’s business leaders at last year’s Mackinac Policy Conference, it called for an extra $130 million-per-year investment to make this happen.

Things may be headed that way. In his own state of the state address, back on Feb. 7, Gov. Rick Synder proposed just that – an extra $130 million – for “early childhood education” over the course of two years. The target is the Great Start Readiness Program, which focuses on at-risk 4-year-olds.

All this also poses questions for the future of private preschools in the state, which have filled the void in some cases for families who can afford tuition.

Theresa Dallos, owner of The Learning Express Preschool in Plymouth, agrees that the preschool years are important. However, she worries about how new programs will be funded between public and private based preschools.

While such concerns may or may not come to pass, the focus on giving young children a critical, pre-K jumpstart is a shared goal.

As Obama’s plan put it, “A ZIP code should never predetermine the quality of any child’s educational opportunities.”