A Home Away From Home at Montcalm School 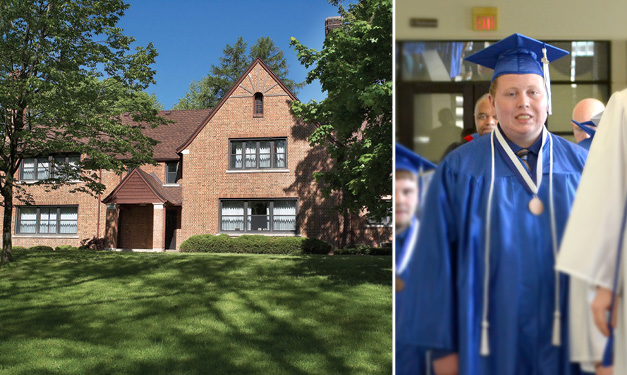 On June 16, 2012, Jonathan Clark joined with 14 of his classmates in donning a blue cap and gown to walk the aisle to receive his high school diploma. It was a graduation day that Jonathan’s parents, Douglas and Sandie, didn’t know if they’d see a few years earlier since Jonathan had struggled in his previous high school. But at Montcalm School in Albion, a program of the Michigan-based Starr Commonwealth, Jonathan finally felt like he’d found a place he could fit in, excel, and even prepare himself for a future on his own.

At 3 years old, Jonathan’s parents received the diagnosis that their son had both high-functioning autism (also referred to as Asperger’s syndrome) and other disabilities. As Jonathan went through school he received services to help him develop both mentally and socially – yet it was difficult for him to fit in. His father recalls one of his birthday parties where they invited all of his classmates, reserving two bowling lanes for the event and bringing pizza and a large cake. Just one of his classmates came. “He had almost no social connections and people were not truly befriending him,” says Doug. Beyond friendships, other aspects at school were difficult for Jonathan.

In junior high school, his parents decided to transfer Jonathan to a private Christian school in hopes that the smaller student population might be more comfortable for him. Yet as Jonathan drew closer and closer to graduation his parents worried about what life would be like for him later. “Despite our best efforts at preparing him for life, he was not going to make it,” says Doug. “If he graduated from that high school, he was not going to be prepared for what came after.”

The Clarks began to search for a therapeutic boarding school that would guide their son toward meeting his full potential, one that had extensive experience working with students with challenges like Jonathan’s. What intrigued Doug about Starr Commonwealth’s Montcalm School was its philosophy of using positive peer relationships to lead students toward better social behavior. Another distinction was that Starr Commonwealth doesn’t use punitive methodology to treat its students. “Along with everything else, we valued how much experience they had,” Doug says. “They have a 100-year old program, so they must be doing something right.”

Still, the decision to have their son go to school 2,000 miles away from their Seattle home wasn’t an easy one. Doug remembers when he first took Jonathan to school: He and his wife decided to ease Jonathan into his new environment and stay with him a few days before moving him into his school cottage. Coming away from their initial visit to the school living quarters – and their son’s new roommates – Jonathan remarked, “I feel like I’ve been released to be with my people.”

Once Jonathan began his schooling, Doug began to notice some of its other benefits. “Jonathan felt really loved and nurtured by the staff there,” says his dad. “I think kids can sense when people are being genuine or not and he could really feel that these people connected with him.”

“The staff are just the kindest people you’d ever meet,” says Jonathan. “There’s no staff [member] that is at all someone you’d dislike.” To this day, Jonathan continues to call staff members on the phone to chat. “They truly became his friends,” notes Doug.

While at school far from home, Jonathan was also able to learn how to live independently. As part of his training, he became familiar with how to budget, grocery shop, cook, and make his way to classes on his own (even handle his laundry). He had an on-campus job that provided the references and experience he needed to continue working after graduation. “The school gave him confidence,” Doug says.

Jonathan agrees: “We were learning how to live on our own and how to push ourselves and how to be on our own without always having someone there to guide us. I really caught on to it.” Today, Jonathan is attending school through an Occupational Living Skills program at Bellevue College in Washington State. He lives on his own, attending classes by taking the bus to campus. When asked about his future plans he explains, “I want to get a nice full-time job that sets the pace for me for the next 10 years of my life.” In fact, Jonathan’s given a lot of thought to returning to Starr Commonwealth, but this time as an employee.

Of his time at Starr Commonwealth’s Montcalm School, Jonathan sums it up this way. “Starr wasn’t even like a high school – it was just a miracle.”

Starr Commonwealth’s original facility was founded by Floyd Starr in 1913 on 40 acres of land in Albion. Starr’s belief was that if children had a beautiful place to live and were encouraged to succeed, they would be able to reach their full potential. Today the facility’s 350 acres include a recreation center, chapel, museum, and other Montcalm School buildings. The Albion campus is also home to an average of 150 residential students a day.

Through the years, Starr has expanded its facilities to help even more families. Here is a list of some of its various locations and programs.

PsychSystems Services for Children with Autism

PsychSystems has two locations, in Wayne and Harper Woods, to serve families with children with autism in the greater Detroit region.

While it offers a variety of services, one of the main areas of focus for helping children with autism is intensive discrete trial training (DTT). “Discrete trial training is an approach that helps children with autism develop basic skills that lead up to them developing biggers skills,” explains Gary Carone, co-executive director of Starr PsychSystems, a psychologist and social worker.

By practicing specific repetitive processes, children with autism learn how to break down more complex skills into simple, manageable parts. “We have cases where once children start doing discrete trial training you see real improvements — it opens up those pathways of learning and can have a big impact on their development.”

Carone explains that PsychSystems evaluates the needs of the child and determines the right treatment approach on a case-by-case basis. For example, children may receive their training in-office or at-home. “We try to have a comprehensive approach when meeting the needs of children,” says Carone. “We want to treat the total family and the total child.”