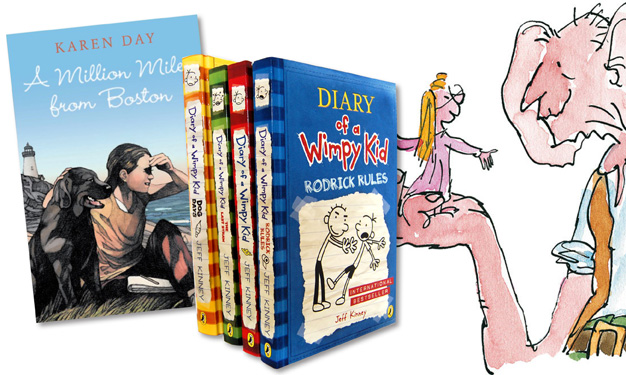 Ah, required summer reading. Looking for something that’ll appeal to your avid bookworm tween – or reluctant reader? Look no further. Metro Parent got in touch with two local libraries, the Ferndale Public Library and St. Clair Shores Public Library, to hunt down the best in classics, new releases and "undiscovered gems," all geared at kids ages 8 to 12. Be sure to add your favorites to the comments section below!

The BFG by Roald Dahl: Sophie, a young orphan girl, is kidnapped from the orphanage at night by a giant. Not only does she suddenly realize that giants are real, she discovers that many of them eat humans like her! Luckily for Sophie, she was kidnapped by the BFG – the big friendly giant – who shows her how he sends good dreams to children. Sophie and the BFG devise a plan to stop the other giants from eating humans.

Sideways Stories from Wayside School (and other Wayside School books) by Louis Sachar: Wayside School was supposed to be built with 30 classrooms on one floor, but instead, it was built 30 stories high with one classroom on each floor! Equally zany are the kids and teachers at this unique school. From a teacher who turns kids into apples and a boy who is sent home before lunch every day, to a nonexistent 19th story, these silly books will keep kids reading chapter after chapter with uproarious laughter.

The Harry Potter Series by J.K. Rowling: Harry, a boy wizard, discovers he is able to cast magic spells and is sent off to the Hogwarts School of Witchcraft and Wizardry where he meets best friends Ron and Hermione – along with a slew of other magical folk. The series encompasses seven years of Harry’s life and the various epic challenges he and his friends must face as he ultimately attempts to destroy the Dark Lord Voldemort, the evil wizard who killed Harry’s parents and left him with a burning, lightning-bolt shaped scar. The writing and imagination in this series is absolutely exquisite.

Diary of a Wimpy Kid Series by Jeff Kinney: Greg Heffley, a "wimpy" middle-school kid, is the hero of this series especially popular among boys of the same age. His mother makes him keep a diary of the daily events that happen in his life – and, through this diary, the reader sees the struggles that Greg experiences at school and how he views them with the aid of cartoons. Greg’s amusing recollections of his life’s drama will have kids laughing from cover to cover.

Kane Chronicles Series by Rick Riordan: Siblings Carter and Sadie Kane haven’t seen each other since their mother’s death when Sadie moved in with their grandparents, prompting their Egyptologist father to bring the family together. When their father is exiled for angering the god Set after an experiment gone wrong, the siblings band together to journey across the world to end Set’s wrath and discover the secrets of Egypt in this thrilling adventure series.

Clementine (and other Clementine books) by Sara Pennypacker: For the younger readers of this age group, spunky 8-year-old Clementine provides a relatable character with a sweet personality. Despite the troublesome situations she often finds herself in, such as getting sent to the principal’s office and a disagreement with her best friend, Clementine’s positive attitude and good sense of humor help her make things right once again.

Savvy by Ingrid Law: Mibs and her family are very unique, to say the least. On their 13th birthday, each family member has acquired a "savvy" – a special power that allows them to control an aspect of the natural world. Mibs is about to celebrate her 13th when tragedy strikes and her father winds up in the hospital. Determined to save her dad, Mibs sets out on a journey that teaches her about maturity and strength.

For Boys Only: The Biggest, Baddest Book Ever by Marc Aronson and For Girls Only: Everything Great About Being a Girl by Laura Dower: These books are chuck-full of trivia, how-to and puzzles kids can use for hours upon hours of enjoyment. Learn how to wage battle against an alligator in case of an attack, how to make an awesome movie, and just how much the world’s priciest cars cost in the boys’ version. In the girls’ version, learn how to host the greatest sleepover of all time, how to get a summer job, and how to save the world!

A Million Miles from Boston by Karen Day: Twelve-year-old Lucy is looking forward to spending her summer in Pierson Point, Maine before middle school starts – as it is the place she can completely be herself. Her mother died when she was only 6, and Lucy feels more connected with her here, something she needs – especially since her father’s girlfriend is becoming more involved in their little family and Lucy’s bothersome classmate, Ian, is also vacationing at Pierson Point. Over the course of the summer, Lucy learns the importance of family and being yourself.