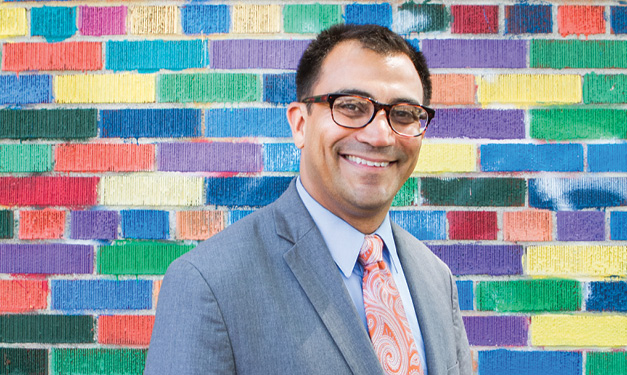 Alexander Cintron is on a mission.

Despite the politics and naysayers, despite the emphasis on per-pupil allotments and enrollment. Despite the tragedy in the everyday lives of some of his students, and the many things he can't change. Cintron's path is clear.

Education is his passion and his life's work. Not working as a financial advisor or in sales. And not as a teacher in Grosse Pointe, where schools jumped at the chance to have him on staff.

Cintron is proud to be the principal at Phoenix Multicultural Academy, a K-8 school in southwest Detroit that's part of the Education Achievement Authority district.

The EAA is a group of schools that were removed from the Detroit Public Schools district. These schools must develop and implement an approved redesign plan and remain under state supervision until they make significant improvement.

As principal, Cintron is tasked with turning around what was once known as the "bad kids school" into an academically rigorous student-centered learning environment.

Now about three years in, Cintron says the school is making great progress. For example, in April this year, Phoenix was named on a list by Excellent Schools Detroit as one of the top 31 elementary and middle schools in the city. It was one of only two EAA schools to make the list.

"We're pretty proud of that. We're showing promise," Cintron says. "It took me a while, but once I figured out 'yes, this is what I want,' my career really took off like rocket fire. My purpose on earth is to make sure that every child gets educated."

Cintron was born in Youngstown, Ohio, where his parents and most people in the community were immigrants coming to work at the local steel mill. Although his family later moved to Pontiac and then Waterford, diversity has always been a part of his life.

"That's more or less how I grew up, exposed to many different cultures at a very young age, in language and in food and in relationships," Cintron says. Everyone in his family stressed the importance of education. "That was a consistent thing in my life," he says.

But Cintron never pictured himself as a teacher. He joined the U.S. Air Force after high school, spent some time living in New York and eventually attended Michigan State University to study psychology and anthropology.

He worked for HIV/AIDS networks for years and also held a sales position for General Wine & Liquor Company while attending a program through American Express to become a financial advisor. He hadn't found his niche yet, he says, but an elderly woman he worked for in Chicago was one of the first to nudge him toward a teaching career.

"Rachel saw a talent in me," Cintron recalls. She was a volunteer reader for a magnet school and had Cintron come with her. "Did you not see how these kids are very responsive to you?" she would ask him on their drives home. "They don't do that with everyone," she told him.

"I didn't see that I had any kind of special talent with children at all. … She kind of planted the seed," he says.

Back in Michigan, Cintron started substitute teaching at a Ferndale school and loved the experience.

"I finally committed, like yeah, I need to be in the teaching field. I need to do this," he says. "With the students, I could see how they have those 'aha' moments."

Cintron then attended Wayne State University, where he earned his master's degree and teaching certificate, bilingual certification and ESL endorsement.

"People seemed to really rally around me being a teacher," he says. Despite job offers in Grosse Pointe, where he was working with a language program, his advisor at Wayne State "was very adamant about me working in southwest Detroit," Cintron says, and soon he was offered a teaching position at Phoenix Multicultural Academy.

"Once I was there at Phoenix, I felt not only a need for me to teach, but to teach students that were disadvantaged," he says. "I felt that I wanted to do this and that was my mission."

He stayed at Phoenix for four years, taking on extra responsibilities as the principal became sick. Inspired to pursue administration, Cintron started studying for his Ph.D. at WSU.

His next teaching position was at an alternative girls school, Detroit International Academy for Young Women, and then he worked as curriculum coordinator at Academy of the Americas for four years before taking a Title III coordinator job with the Detroit Public Schools central office.

Midway through the year, Cintron got a call to return to a school that still felt like home to him – Phoenix – and this time as principal.

Someone tried to warn him: "That is a crazy, crazy school. Nobody wants it,'" he recalls being told. "It has a special place in my heart," he responded.

Just six months into his new role, though, he learned Phoenix was becoming an EAA school and there would be 100 percent turnover.

"There's been nine different principals in the last 12 years. There's been no consistency. … But the kids are the same," he says. He decided to apply for the principal job through the EAA and got it. "I knew the stakes were high, and I had the mission and the charge for turning this school around."

Despite the challenges – politics, enrollment issues and some of the heartbreaking issues his students face at home – it's a mission he's happy to take on.

"I love being a principal and I love the fact that I'm a principal at Phoenix," says Cintron, who's also a father of one.

He sees the bigger picture, too, and has considered pursuing a superintendent or chancellor position sometime in the future.

"I feel education is like water and food. Our children will not survive without it," he says. "As Americans, we need to look at all our cities and make sure our kids are receiving quality education."

The challenges his students face are numerous. Some suffer from post-traumatic stress, have anger issues or bounce between multiple homes due to eviction. He sees young girls pregnant at just 12 and 13 and their struggles to complete school. Other students have mental health needs that aren't being met or are on an ever-changing list of medications.

"Some of these things as a principal are beyond my control. A lot of our students need mental health help more than anything," he says, noting that he's currently working on getting trauma counselors into the school. He works closely with parents and says even those in the midst of drug addiction or prostitution show great concern and love for their children. "Most of the time parents are just trying to survive," he says.

One student, Cintron recalls, was particularly aware of the lack of opportunities in her life and was becoming depressed. "I want to go to a normal school where I can just learn like all the other kids. It's just not fair," she told him. "I said, 'It's not, but you can continue to develop yourself,'" Cintron recalls. Together they looked into high school options.

The girl was later accepted to Cass Tech. "She's very happy about it. That's a memorable experience
that will stick with me," he says, adding that another Phoenix student was also accepted into Cass Tech this year. "That's something that's unheard of: Students at 'the bad kids school' going to Cass Tech. Kids are really showing promise," he says.

Another student who dealt with emotional issues benefited from a blended learning (part in school, part at home) program, and one girl in particular stands out for what she said while looking in awe at the school's new paint job. "She said, 'You guys must really care about us?' I said, 'Why?' She said, 'It looks so nice and clean in here,'"Cintron says.

The EAA had repainted all the walls when it took over the school and fixed issues like the auditorium ceiling, which was caving in.

"I grew up in a working class environment. We were always clean and we were always cared for. I just want that for the kids that I see," Cintron says. "I'm able to give them that opportunity at least seven or eight hours a day, when they're at school, that's a clean, safe environment for them. That's what I feel good about."

And he intends to see his mission through.

"I'm not another principal that's going to leave and walk out the door. I'm going to sit there and help them," he says. "I feel good. It's a really wonderful place. We have more work to go academically, but we're showing promise and progress in the right direction."