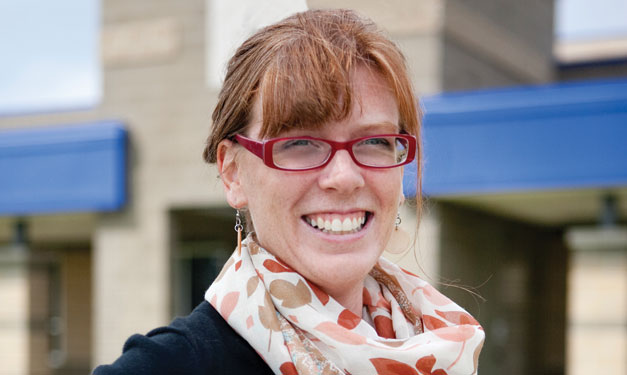 Before Southwest Detroit Lighthouse Charter Academy opened its doors in September, regional vice president Anne LaTarte had one mission: to fill the halls of the new school with students who were eager to learn through a college-prep, art-infused curriculum.

There was, however, one roadblock. The school had yet to be constructed. In fact, builders didn't break ground until March – just six months before kids would return to class.

It seems like it would be an impossible feat to get families interested in a new school that they couldn't actually tour. But LaTarte's outgoing personality and friendly disposition – combined with her extensive background in education and strong work ethic – were exactly what the school needed to get the community's attention.

And all her hard work paid off. Now, some 300 students in grades K-5 flock to class at the new school each day.

"My life's work has been dedicated to education," LaTarte says. After earning a bachelor's degree in human development and social relations from Kalamazoo College and a master's degree in teaching from Pace University in New York, she stayed in New York to work as a special education teacher. Later, LaTarte served as program director and managing director of program with Teach for America (TFA). She also completed a board residency with the Department of Education in New York.

"My work with TFA was focused mostly in Harlem and Washington Heights, and then in the city. It was all 1.1 million children – 1,800 schools," she says.

At this point in her career, LaTarte had developed a broad perspective on education, and how she wanted to help make a difference. She worked with a team of people who coached teachers at local schools.

While working in New York City, she joined the Bronx Board for Lighthouse Academies, a national nonprofit charter school network founded in 2003.

"I helped them open a second school just as a board member in the Bronx. So as I'm working for TFA and the district, that was my way of staying really connected with the school," she says.

But, after nine years in the city, LaTarte and her husband Matt McKenna, both Saginaw natives, were itching to come back to Michigan. So, when Lighthouse founder and CEO Michael Ronan approached LaTarte about the new school in Detroit, she thought, "Oh my gosh, this is my chance!"

In September 2012 they relocated to Corktown, and LaTarte started preparing for the school's debut.

Short of operating heavy machinery to actually help construct the building, LaTarte had a hand in every aspect of this project.

"It was very much spearheaded and led by her," says principal Jill Geden, "which I think is why we have such a high population of students now, because she worked really hard to build relationships with families."

Filling those school halls was, LaTarte says, the largest task.

"It was mostly student recruitment – the amount of time I just spent standing in front of grocery stores, knocking on doors, going to every single event that happens in every single functioning park."

She and a team of recruiters made themselves known in the community, spending weekdays and every weekend meeting families.

As a result of this process, LaTarte has a great rapport with parents in Southwest Detroit. Some still call her on her personal cell phone instead of the school line – something LaTarte is working to change. That, however, speaks volumes about the relationship she's established with hundreds of families in the city. Parents have a level of comfort with LaTarte, and she takes that very seriously.

"Families have entrusted us with their most precious gift, which is their kid," she says.

And she feels accountable for the success of these students and delivering on the promise she made to families.

But, she says, delivering on that promise isn't a one-person job. She asks for feedback from Geden, teachers and parents.

And even in her busy schedule, she takes the time to sit in classrooms.

"The reason I did all of this was so I could see magical interactions between students and teachers," she says. "And so, it's important to me that 30 minutes a day, I'm spending time watching that happen."