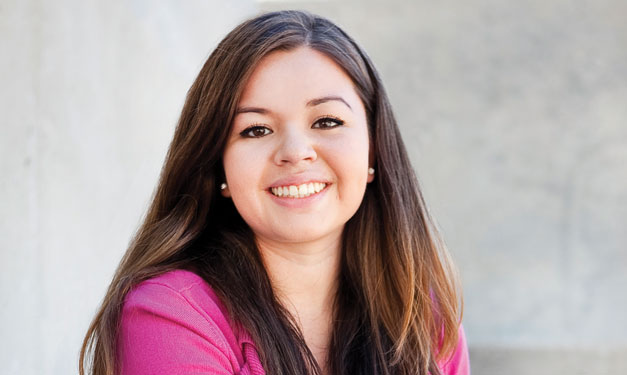 When Elizabeth Morales graduated from Cesar Chavez Academy three years ago, more than half of the faces she started school with had disappeared.

"My high school (class) started out with more than 200 students," Morales says. "By the graduating class, we were down to 98. You lost more than 50 percent of the kids, from freshman to senior year. … I knew a lot of high school dropouts."

In most cities, that number would be shocking. In Detroit, it's been the norm. Granted, things are getting better. Cesar Chavez's graduation rate last year was nearly 84 percent, according to the Michigan Center for Educational Performance and Information. And Detroit Public Schools' grad rate hit 65 percent in 2012 – its highest since 2006. But there is still work to be done.

Morales says her upbringing, support from family, help from community leaders and self-determination were key in her successes – and excluded her from being a stereotype or tragic statistic.

Instead, the 21-year-old is now a political science major, with a minor in Spanish, and in the midst of her senior year at the University of Michigan in Ann Arbor.

The importance of education

Born in Chicago, Morales and her family moved to Southwest Detroit when she was 3. Her parents, Maria and David, immigrated to America from Michoacán, Mexico. They moved from the Windy City to the Motor City to provide a better life for Elizabeth and her now-18-year-old sister, Jacqueline.

Although neither of their parents completed high school, let alone attended college, it was important for their kids to understand there was only way to truly succeed.

"From a very young age, they instilled the thought that the only way you can get out of the 'hood, or the situation, is by education," Morales says. "My dad always said, 'That's your only way out, your only ladder. So do it.'"

The mentality prevalent in the Morales household wasn't the same across the board for some of her cousins, aunts, uncles or even among the Latino community, Morales says. "(But) it was super important for my sister and I to get an education. It was the No. 1 goal," she says. "It was never an option, and my parents were always very involved in school."

To say mom was involved in her daughters' schooling would be an understatement. She was the director of the Parent Teacher Association and volunteered at their middle and high schools. "You just couldn't get rid of her," Morales jokes. "She was everywhere."

"She focused 100 percent on us when we were younger," Morales says. "It wasn't until we were older that she focused on herself and getting her education back. She's in another country, with a different language, she's studying for a huge test that people my age, who are born here, are taking. It was such an inspiration."

The challenge of excelling

Wanting to succeed and be educated hasn't been easy for Morales. Ever since middle school, she says she was called names such as smarty-pants and teacher's pet. Her only fault was she cared and wanted to do well.

"It's really hard when you know what you want and it's not on par with everyone else," she says. "When you actually do well in school and get good grades, you're singled out."

The education shock was made apparent after she came to Cesar Chavez her sophomore year. The experience was a stark contrast to what she had become accustomed to her freshman year at Allen Park Cabrini High, a Catholic school.

"If you were doing poorly in school, you were put on probation and it was a huge deal," she says. "The dean's list was very proudly shown. Then, you go to (Cesar Chavez), you do well, and people don't respond well to that."

Morales also felt the curriculum at Cesar Chavez Academy, a charter school run by The Leona Group and authorized by Saginaw Valley State University, wasn't as challenging as she needed.

"I felt like a lot of the teachers 'dumbified' the subjects and curriculum. I relearned everything I learned my first year at Cabrini over the next three years at CCA. I don't think I learned a single new thing, with the exception of maybe one or two classes."

Morales says she "faked it until I made it" and did her homework away from some classmates. Thankfully, she says she was around supportive adults a lot. The only extracurricular activity she participated in was soccer. Instead, her maturation came from being active in the community.

Morales says she enjoys being a voice for the youth and her community and was active in the Congress of Communities. The Detroit organization's mission is to provide leadership and facilitate collaboration of residents, youth and stakeholders to foster a vibrant and sustainable community.

Maria Salinas, executive director of the Congress of Communities, remembers Morales hanging around at a young age. She knew then there was something special.

"I met her mother first, who was very active in the schools," Salinas says. "And then, around 15, Elizabeth became involved with the neighborhood initiative I was doing. She just seemed very ambitious, in-tune with her heritage and some of the other stuff that was going on. I took her under my wing and she became part of my youth program."

Salinas, who was born and raised in Southwest Detroit, also understands the stigma that comes from wanting to succeed in school.

"When you are put in an environment of an inner city of Detroit, where the barriers of peer pressure have existed for around 30 or 40 years, being educated wasn't cool. It wasn't the norm," Salinas says. "What people don't understand is that we have a lot of smart kids, but they haven't been educated properly. Some of them come from non-educated households, and I say that with all due respect."

Morales also volunteered at the Detroit Mexican consulate and at Latin Americans for Social and Economic Development – and tutored and mentored girls at Our Lady of Guadalupe Middle School in Detroit. Her sister, who also attends U-M, graduated from Detroit Cristo Rey High. She, too, made it a priority to succeed in and outside of the classroom.

"She took Latin for three years," Morales says. "She worked at the Detroit Science Center at the age of 14 and gave tours."

Getting to U of M was a feat in itself for the older Morales. After high school, she went to UM-Dearborn before making the move to the main campus in Ann Arbor.

"I worked for three months on scholarship applications," Morales says. "I was crying every single night when I hit that 'send' button, because I was so frustrated. I hated it, but that's just what you had to do. I think I applied for at least 20 scholarships. I received three. That's the odds, and you have to know that.&
quot;

Currently, Morales is applying for law school and preparing for the Law School Admission Test (LSAT). She says she's not sure which university she'll end up at or what type of law she'll practice.

"I think I want to go into the judicial system," she says. "I worked with a juvenile detention center and it struck a chord."

Despite the uphill struggles Morales faced, she says things are getting better in the community. Friends who dropped out of high school have since returned to get their GED and are moving on to community college because "their biggest mission is to go to college. They don't want their kids to do what they did," Morales says.

An increase in parent involvement, like the one Morales had, also is playing a role. Salinas says in the last three years, the community has had more of that than there's been in a long time.

And if there's at least one thing Morales wants current Detroit students to understand, it is that sometimes, you have to go against the current.

"It's a lot easier to let yourself go and not do anything, rather than standing up against it," Morales says. "I think if enough people stand up against it, then it won't be so hard. Just try, and you can do it."

Find out what baby names parents loved in 2020.
Read more