Whether you've got a preschooler or a high schooler, here are the top tales kids should read including The Cat in the Hat and To Kill a Mockingbird. 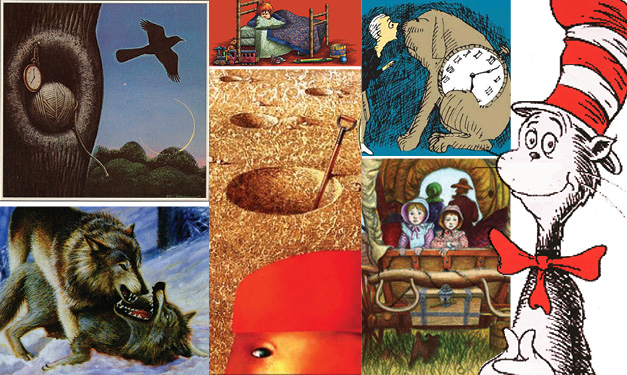 Each generation has different books that are popular in their day, but certain books remain popular and are passed down from one generation to the next,” says Janet Batchelder, manager of the Detroit Public Library’s Children’s Department and the HYPE (Helping Young People Excel) Teen Center. These are the books that go on to become classics, Batchelder notes. “A lot of these books have withstood the test of time, because there’s something in the story that you want to know from our culture.”

Batchelder gives the Little House on the Prairie series by Laura Ingalls Wilder as an example. “I’m re-reading those right now, and they’re just as fun to read again as an adult.”

To help your kids join the cultural conversation when it comes to classic books, consider having them read on their own, or read together, these selections.

Preschoolers will enjoy growing their language skills through books that carry simple messages in creative ways.

The Cat In The Hat by Dr. Seuss

Dr. Seuss had a way of crafting catchy rhymes that your kids will recall well after you’ve closed the pages to the book. The zany images of this feisty feline fit with the silly tale of a mischievous cat.

Amazon reports that a copy of this kid favorite sells every 30 seconds. If your children have already come to know and love the caterpillar’s tale, try some of Carle’s other books, suggests Batchelder. “They’re all wonderful.”

In elementary school, children are becoming better readers through books with interesting stories that are still easy enough, so that they can sound out bigger words.

The lyrics to the time-honored spiritual come to life in the illustrations and retelling by Nelson Kadir. You can read or sing along with this book.

Frog And Toad Are Friends by Arnold Lobel

Featuring the original odd couple, this story follows the tales of best friends Frog and Toad. There are several books in the series recounting their adventures.

Ramona the Pest by Beverly Cleary

Clever Ramona doesn’t always know how to make her way in Miss Binney’s kindergarten class. Your child may relate to Ramona’s joys and troubles.

Children are able to read longer books on their own as elementary school picks up. These chapter books introduce kids to captivating tales that will have them eager to flip to the next page.

Alexander and the Terrible, Horrible, No Good, Very Bad Day by Judith Viorst

Things don’t always go as planned – that’s the message behind this story of Alexander, a boy who just can’t seem to have anything go his way.

Little House on the Prairie by Laura Ingalls Wilder

The novel about a young girl growing up on the prairie in 1869 has captured the attention of generations since it was published. Many of the details in the book come from the author’s life and experiences.

Because Of Winn-Dixie by Kate DiCamillo

A stray dog becomes an integral part of a young girl’s life in this story about friendship between children, animals and adults. The book became a bestseller, a Newbery Honor winner and a movie.

As children get older, books include more complex stories that allow them to think more about various social and cultural ideas.

The Phantom Tollbooth by Norton Juster

Guided through a mythical world that includes a Mathemagician and a “Whether Man,” a young boy named Milo has Tock as his companion for this journey – a dog whose body has an alarm clock in it.

Bridge to Terabithia by Katherine Paterson

Following the story of two young friends who create their own imaginative world in the woods, this tale touches on loss and the power of friendship. Have a box of tissues nearby for this Newbery Medal-winning bestselling novel.

This award-winning book includes mystical elements set in the reality of a boy wrongfully accused of a crime who’s then sent off to a boys’ detention facility in the desert. The satisfying ending will leave your child wanting to see the movie. Go ahead – the film sticks closely to the book.

Teens can contemplate heavier topics and ideas through stories that guide them into asking questions about their own conceptions about the world.

The Book Thief by Markus Zusak

In 1939 Nazi Germany, a young girl named Liesel steals books to read and share with others, including a Jewish man who’s been hiding in her basement for protection.

I Know Why the Caged Bird Sings by Maya Angelou

Following the life of the famed poet and writer, this autobiography from Maya Angelou deals with how to overcome adversity while building character.

To Kill a Mockingbird by Harper Lee

This Pulitzer Prize-winning novel follows the experiences of a young girl, Scout, who details her father’s attempts at defending a black man against charges brought up in a racially charged South in the 1930s.

The Call of the Wild by Jack London

Telling the tale of a dog, Buck, stolen from his California home and forced to become a sled dog in the Yukon in the 1890s, the story is considered one of the great books of American literature.