A recent study found that cyberbullying is on the rise at middle and high schools. Find out what it is, the harm is causes and how you can help. 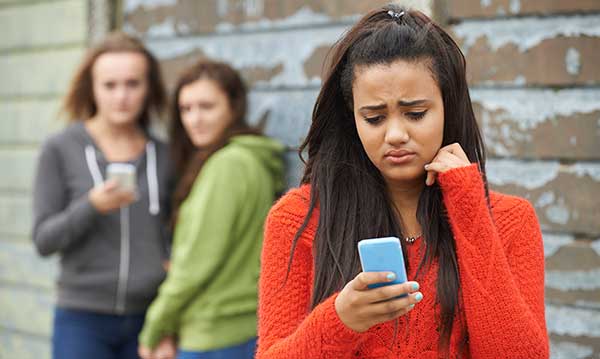 Kids are cruel. They mercilessly nitpick one another about trivial things like clothing, hair and weight to the point of tears – and challenging the status quo or social norms will earn you a one-way ticket to Tease Town.

Back in the day, kids that found themselves victim to the playground bully found solace after school, on weekends and over summer vacation, but with the rise of social media, the torment that they face is more widespread and follows them inside their pockets.

And what’s worse is that cyberbullying is on the rise.

According to a recent study by the U.S. Department of Education, 25.9 percent of middle- and high school-aged kids reported problems with cyberbulling at their schools, a pretty big jump from the 18.6 percent that reported the issue in 2009 – and that’s despite any and all effort to curb bullying at the state level.

Even more alarming is that kids are reporting a 10.3 percent uptick since 2009 in violent behaviors on their campus, too.

This is a huge problem for kids and parents, especially since bullying, both cyber and otherwise, can cause physical and mental strain on the child being bullied and can get the bully into legal trouble.

But not all is lost. There are some things that you can do to stop your child from engaging in, and being the victim of, cyberbullying. Here, Dr. Marcie Zoref, a licensed clinical psychologist in Birmingham with more than 15 years of experience under her belt, explains why cyberbulling is an issue and what you can do to help your child.

“I think (cyberbullying) is taking bullying to a whole other level, faster,” Zoref says. “You’re reaching a lot more people (and) not just at school but in other towns or states. There’s no limit.”

Because of this, cyberbulling can be a constant barrage of endless cruelty directed at your child. It can cause physical issues, like headaches and stomach pains, and can have detrimental affects on the child’s mental health, Zoref adds.

“If it escalates, cyberbullying can lead to a lot of issues (including) depression, anxiety, self-esteem issues, academic performance issues (and), as they get older, substance abuse,” she says.

Though your child may not want to run to mom and dad if they’re being cyberbullied, there are some red flags parents can watch out for.

“You could assess their social functioning,” Zoref explains. “Do they have friends? If they have a lack of connection to their peer group or are isolated? That could be a sign.”

Emotional and personality changes, like lashing out or retreating within themselves, are also surefire signs, and change in academic or athletic performance is another thing to look out for.

If you suspect that your child is a victim of cyberbullying, don’t ignore the problem or leave the child to fend for his or herself. Instead talk to them about it and find out where it’s coming from.

It’s also important to make yourself aware of what apps and websites that your child is using, Zoref says.

Apps that feature disappearing messages or anonymous comments, like the popular Sarahah app, which allows people to “get honest feedback from your coworkers and friends,” can be the most dangerous.

“Those aren’t going to be helpful for kids at all,” Zoref says.

Above all, if your child is having the emotional and physical stress that comes with cyberbullying, don’t be afraid to seek therapy, which can give them coping tools and positive feedback about themselves.

And if your kid is the bully?

No one ever wants to admit that little Johnny or Susie is bullying another child, but the fact is that cyberbulling comes from somewhere, and that there may be an underlying cause behind this behavior.

If you are confronted with evidence that your child is cyberbullying someone, don’t fall into the “not my child” trap. Instead, talk with them and seek out help.

“The person doing the cyberbulling would really benefit (from therapy) because they are dealing with mental health issues,” Zoref says. “You need to evaluate their mental health, the family dynamics and how they are functioning.”

Aggression and irritability are signs that your child could be playing the part of the bully. This behavior could stem from a number of things, including social and family pressures or a strong sense of competition, all of which can be worked through with the help of a therapist.

Try these things to do with your kids in Macomb county while they’re out of school for mid-winter break.
Read more
At Home

Help your little one grow into a confident young adult with these fun activities.
Read more
Outdoors