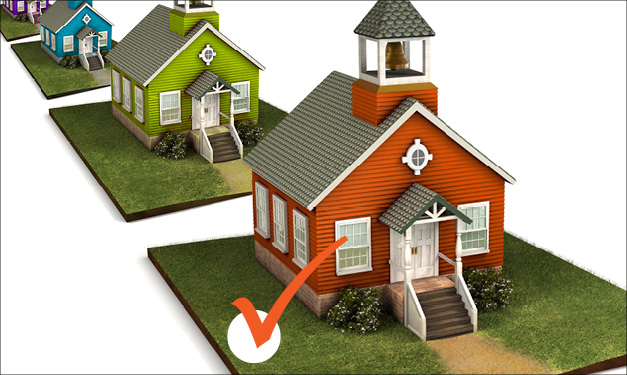 While picking a school for your child may be a big task, these three moms handpicked their children's Detroit private, charter and public schools and are pleased with their decisions. Find out why they think the schools they chose are a great fit for their families – and what they suggest other parents do when searching.

Even when Joi McIntosh put her son in preschool, she and her husband already knew what path they wanted Joshua to take academically. Next, they had to find a school that would be a good fit.

Child: Joshua, eighth grade
School: Bates Academy, 19701 Wyoming St., Detroit
Type of school: Public, application required
Affiliation: Detroit Public Schools
Grades: Pre-K-8
Number of years Joshua has attended Bates: Nine (since kindergarten)
What Bates is known for: Being a school for high-performing and academically gifted children; recognized as a top-performing school academically in the state and in the city
What Joi was searching for: Strong connection between teachers and students, an importance of math and science in school, availability of physical activities

"My husband and I had three main things we were looking for," she says. They looked at public and private schools actively, knowing they wanted teachers who had strong relationships with their students, a school that put an emphasis on math and science from day one and opportunities for physical activities.

One Detroit Public School stood out during the search: Bates Academy.

"I knew its track record and I knew it would educate my whole student," McIntosh says of the school, which is known for educating academically gifted pupils.

"For our case, this was going to be the first time he really had to be in school. Preschool is optional. But now you're getting ready to start your real journey. This is what you've got to work for, because it matters later on in life," McIntosh says.

The quality of teachers at Bates, which was one of the main things on the list, stood out. "They didn't just teach more; they boosted the rate of learning." The bonus was the school was just five minutes away from the family's Detroit home.

Joshua had to test into the school. Once in, the focus on individual subjects began immediately, which fulfilled No. 2 on McIntosh's list.

At Bates, the classes are accelerated. It is academically rigorous, but there's a good balance, McIntosh says.

"They have enough rigor, but they match it in giving the child an outlet of fun," she says, adding that Joshua plays basketball but also academic games that focus on subjects. "So that was another aspect of Bates. … You need recess. Kids need a down time. They need kid time."

Joshua has been a 4.0 student for the nine years he's been at Bates, and he excels at math and science, too, McIntosh says. Plus, it's a comfortable environment for kids to be smart, she says. Middle schoolers get to pick their own electives and take classes that interest them. McIntosh herself is active at the school on the Parent Advisory Council on Student Achievement.

Worried about your child adjusting to a new school? Here's what schools are doing to help kids adapt and what parents can do to help at home.

The most surprising thing to her about the school? "Bates Academy thrives even though our building per se is not the best," she says, explaining, "It's kind of like a flower growing in between the cracks of the concrete. Not the best situation, but we're still showing that the kids still grow, they still thrive, (and) they still succeed."

For other parents starting a search for a new school, McIntosh recommends going to the school yourself first. You'll get a firsthand look at the learning environment and teacher-student interactions. "No one can express that to you in words," she says.

It's also important to know your child and his interests when searching. "Pick a school that will pique the interest of your child from that aspect, so they will enjoy the ride."

McIntosh loves Bates Academy for her son so much, she says she wouldn't change a thing about his experience.

Patrick had been in a Catholic school since he was 3 years old. His school in Grosse Pointe Park only went through eighth grade, though. While his family did consider a few public high schools for his next move, mom Margaret Roache says they were "pretty well-focused" on him continuing his education at a Catholic school.

The Detroit family looked at a few private schools outside of the city with the intent of finding one with high academic standards as well as plenty of arts programs, since Patrick had a passion for theater and music.

But from about sixth grade on, Patrick knew he would like to attend University of Detroit Jesuit.

"We knew people whose sons had been there and were good guys and smart kids and did really well with college," Roache says. Academically, they were confident U of D Jesuit would be a good choice for Patrick.

Patrick tested in the 99th percentile for the high school entrance exam. Today, Patrick is carrying a 4.0, got a 34 out of 36 on his ACT and stays highly involved in the arts – plus finds time to volunteer in the summers. Now as a senior, he's required to do a service project, Roache says, noting that while the school is strong academically and does well preparing kids for college, it also emphasizes helping others.

"Their whole motto is 'men for others.' It's that service thinking outside of yourself," she says.

U of D is also committed to Detroit, since it made the conscious decision to stay there in the 1970s. The school boasts having a diverse student body racially, socioeconomically and even religiously, which Roache notes is "really important."

"I mean, we live in Detroit. And being Detroiters,
we wanted Patrick to … experience all sorts of people," she says.

In Roache's experience looking for a school for Patrick, the family started gathering ideas of possible high schools when he was in the sixth grade, and began searching through seventh and eighth grades. They spoke to parents who had sons in high school or sons who recently graduated.

"A lot of word of mouth was a big component for us, as well," she says.

For those considering U of D Jesuit for their son, Roache notes that while the school does cost money to attend, the school makes an effort to provide financial assistance.

"They don't want parents to back away just because they can't (afford to) send their kid there. They want every kid to have the opportunity to go to U of D," she says.

Ultimately, Roache says being at U of D feels like being part of a family.

"We've really been lucky. I really feel blessed that we had this as a choice," she says.

Christine Wingate wasn't pleased with the public school her daughters Joy and Grace attended before they transferred. She says the building wasn't clean, it felt "spooky" and sometimes teachers didn't show up.

"I wanted something different," she says.

Wingate was already planning to change her kids' school – when their old school had a fire. That lit a flame in Wingate, too, giving her all the more reason to switch.

One day, she rode past Flagship Academy, a school in her neighborhood for which she thought she'd have to pay tuition. To her surprise, it was a charter school, so it was free to attend. "I finally went in, and my children fell in love with it right away," Wingate says.

One of the major qualities Wingate wanted at her children's future school was a good principal. And when her family visited Flagship and met Principal Krystal Bell, Wingate says they were immediately happy. They took a tour of the school to see the classrooms and observe the teachers. After the experience at the girls' former school, Wingate was particularly impressed by the cleanliness of the building.

She enrolled her daughters. They've been there for three years now, and Wingate says they're doing great. Joy, her oldest, is in the National Honor Society and excels at reading and writing. Grace, who is in fourth grade, is good in all her subjects and enjoys the "lovely ladies" club after school, where she exercises, socializes and does homework. The girls volunteer at school, and so does Wingate.

"My children have learned a lot more. They have grown," she says.

In addition to being academically driven, the school also has a strong focus on morals and teaching values. The principal is caring, and Wingate notes that the teachers are willing to help students after school. Plus, she says, the environment is safe.

Just as Wingate visited her kids' future school, she suggests parents searching for a new school do the same.

"Go in and examine the school. Go in and look around and make sure it's a proper environment for your child," she says, adding that parents should also be sure to meet the principal. "Does it feel right? Do your children like it? Because (my children) came with me. I wanted them to tell me, 'Is this where you want to be?'"

Wingate is happy with Flagship Academy for her daughters, and says she'd recommend the school to anybody. "It's a small jewel in the city."