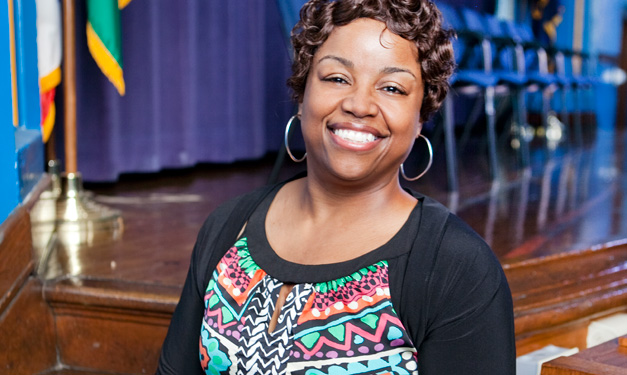 Every morning, students at Davison Elementary-Middle School are interrupted over the public address system by a familiar, upbeat voice.

The friendly announcer is Calli Leslie, the school's instructional specialist and inventor of "POP Time," or "Pencil On Paper" Time. In an effort to increase the school's writing scores, Leslie came up with the 15-minute creative writing exercise. Each day, students write on a different topic that Leslie explains with her signature pizzazz – sometimes she even sings.

She says she's seen "students go from really shy and reserved" to theatrical with their writing.

City: Southfield
School: Davison Elementary-Middle School in Detroit
Years at Davison: 11 years, plus her years student teaching
What she loves most about DPS: "The access to the knowledge" through departments and professional development courses within the district.

"It's just giving them that forum to be free," she describes.

For Leslie, 41, her job at Davison is more than just a job – it's a dream fulfilled.

"I've always wanted to work in DPS schools," she says.

After experiencing student teaching at Davison, she "loved it."

"I never wanted to leave," she says. "It has been wonderful."

Leslie was hired as a second grade teacher and also worked as a special education teacher and literacy coach before transitioning to her current position. Now, as an instructional specialist, most of what she does is analyze data on test scores, use data to provide teachers with strategies for improvement, attend workshops and bring back information to help the staff.

One major thing she likes about her job?

"The interaction with the students, for sure," Leslie says. "In this position, an instructional specialist wouldn't have much access to the students because we're more so working with teachers."

But thanks to her inventive writing program, she gets that opportunity.

During the 2007-08 school year, Leslie says the school's writing scores were brought up at a staff meeting – and although they were decent, the school wanted to see improvement. They wanted to "come up with something snappy."

"I personally love acronyms," she says, "and I came up with POP."

Pencil On Paper Time was originally going to be a list of topics on a calendar the teachers would have students write about. Her principal had a different idea – announce the topics on the PA system.

Over the years, the program has mushroomed into something bigger.

"I started to get so many ideas, and I just started to get more comfortable," she says. What was once just an announcement of the topic grew to an introduction of a few sentences. Students can now submit their writing to a box in the main office to see if they're the "Top Popper of the Month" or if they won "Top POP Pic," – a contest for young students who draw.

At the end of the school year, there's a "POP-tastic" competition. Students read their POP Time writing to judges and can win prizes. Leslie says they've gained sponsorships over the years. Office Depot caught wind of the program and supplied paper and ink, and binding for books they make of the writings for the students in the competition. They even gave the "Most Valuable Popper" a Kindle Fire.

Leslie says the students have been her encouragement to continue doing what she does.

"It has been really rewarding watching the students," she says. "Just to see them and for them to say 'I miss you, you taught me so much.'"

This Detroit dad discusses toxic masculinity and what it's like raising a son today.
Read more
Advice