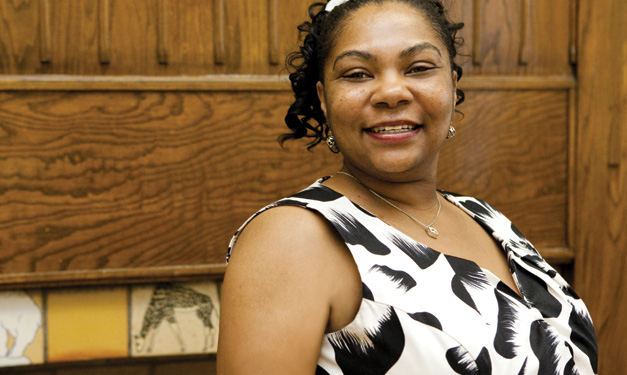 For 10 years, Anneccia Davis-Dunson has been volunteering at Bennett Elementary School in southwest Detroit. Both of her children, Tyler and Naja, attended Bennett, so she wanted to do what she could to give her kids a better education and make the school a better place.

Tyler and Naja, now 14 and 12, currently attend other Detroit Public Schools – but their mom is still highly involved at their alma mater.

“Both of my children graduated from Bennett, but I didn’t,” jokes Davis-Dunson, 43, a class of ’88 graduate of Cody High School.

She first started volunteering during her kids’ years in Head Start, and soon recognized how much it mattered.

“When I first started, I realized as I was involved with my children’s education, they were more interested in their education,” Davis-Dunson says. “So I thought I might be on to something big here – a good thing.”

A typical day for Davis-Dunson means assisting wherever she can – running errands, cutting out shapes for projects, hanging poster boards, and being a parent-staff “liaison.”

Before she went back to school to study early childhood education last year, she usually volunteered at least three full days a week. Ever since, she’s continued to give it her all at the school.

“One thing about this school is everybody helps everybody,” Davis-Dunson says. “We’re like one big family. One big, diverse family.”

“You can’t come in here and be sad,” she adds. She sums up the school as “the holy Bible in action” because “it’s alive, it’s real and it’s healing for anybody.”

Bennett’s principal, Josette Buendia, is a big part of the reason, Davis-Dunson says.

Bennett Elementary in southwest Detroit recently saw major upgrades to sidewalks and crosswalks to improve its students’ commute to school. The improvements were funded with a federal Safe Routes to School (SRTS) grant, which pays for safety improvements and education programs aimed at encouraging students to travel safely between home and school.

“She creates an environment of love and learning. That’s her mission and that’s what we feel when we walk in here,” she explains.

And now, after 10 years, with her two children who’ve graduated from Bennett and moved on to other DPS schools, Davis-Dunson stays.

“I don’t just have two children,” she says. “I have two biological children, then I have nine adopted daughters – my Girl Scout troop – and then I have over 700 foster children here. So I’m a mother of many children of many different races and cultures.”

She remembers being in school, and just how much it meant to her when her grandmother would come to her school events to support her.

“It’s just paying it forward, you know? A lot of children don’t have parents that are interested in their education,” she says. “So I’m like that parent who encourages all kids. I’m there for everybody’s kid.”

When asked if she ever sees herself not being involved at the school, she shakes her head. “Nope. I don’t.”

The rewards are too great to leave, she says. From hugs and recognition from all the children she’s helped, to just “watching them grow.”

“If I see one of these children become a successful politician or successful business owner, I’ll know I played a role in that child’s life,” she says. “And that will be my reward.”

We read Michigan's annual education report so you don't have to. Here's the crucial information parents should know.
Read more
Attractions