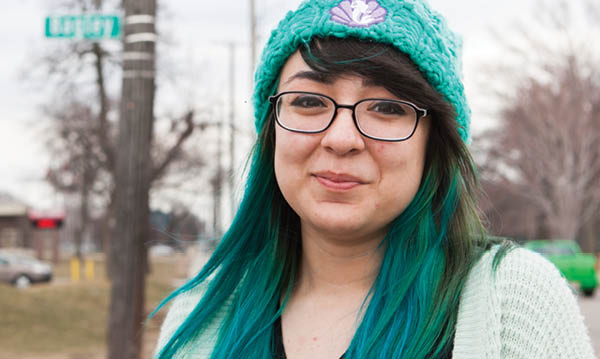 A 30-minute walk might not seem like that long of a walk to school. But throw in stray dogs, downed power lines, drag racing and the possibility of having to take an alternate route due to some of these unforeseen circumstances, and it’s dramatically more turbulent.

That’s the reality of getting to school for Marvella Gutierrez, 18, a senior at Western International High School in Southwest Detroit. When asked about her walk from her mom’s house on Scotten Avenue to Western, she points out at least one upside to it.

“Recently they’ve been doing construction there, so that’s a good thing because they’re actually setting up lights and they’ll actually work this time,” she says. This improvement won’t be much help to Gutierrez, who graduates this year, but she’s grateful on behalf of others. “My sisters will probably be walking the same path whenever the car doesn’t work, so I’m happy that they’re finally doing something about it.”

For Gutierrez, who has a zeal for learning, the daunting walk to school on the days she can’t get a ride doesn’t deter her. If anything, it is another reason to press on.

A journey to learning

Throughout her childhood, Gutierrez moved from Detroit to Florida and eventually back to Detroit around sixth grade. She’s the oldest child in her family, with two younger brothers ages 14 and 17, and two younger sisters ages 10 and 11.

She’s a creative teen who adores art, improv acting (she has her own YouTube channel), and playing the violin. Over the years she’s been involved with various community groups. What’s more, she works about five days a week at a restaurant while balancing school.

School is one thing she’s truly passionate about, which she thanks her mother for instilling in her.

“She didn’t go to school. She only went to first grade. So I guess with her wishing that she would have gone to school longer, even though she couldn’t, she always pushed us to love learning because that’s the only way you can continue for a better life,” Gutierrez says.

And while it’s that promise that keeps her motivated every day, that doesn’t mean the days she makes the half-hour, two-mile hike down Scotten are easy.

“Yes, there have been stray dogs,” she says of walking down the street, which has an industrial stretch. Sometimes, to avoid the dogs, she’d take a longer, alternate route. She recalls walking with her brother and coming across downed power lines.

“There’s always people like, racing down the street,” she adds, since she describes it as “mainly like an empty street.”

As if those encounters aren’t disconcerting enough, she has to watch out for catcalling from passersby. “They will try to pick you up in the morning and afternoon. They don’t care,” she says. And they don’t give up easily, she notes. “If you’re alone, they’ll follow you for a little while and then they’ll drive away when they’re like, ‘Oh, I guess she’s ignored me enough.'”

Sometimes, if no ride is available and it’s too cold, Gutierrez doesn’t make the trip to class – but she still keeps her grades up. She proudly carries a 3.0 GPA.

This walk to get to class is not just a reality for Gutierrez, either.

“I know – I really do know that at the end of all of this, there has to be something better out there, and the only way to get to it for me is to overcome them,” she says of challenges. “And not just for me, for my little sisters and the other kids who are going to have to walk to school and go through the same things.”

Gutierrez, as part of Congress of Communities Youth, has given tours of her route to school (you can find a 2013 video on YouTube of her tour with the city council candidates, which led to her involvement with 482Forward’s Walk With Me Challenge, that advocated for universal school transportation). She hopes Detroit transportation options for schools will someday improve.

“There have been some days where I wouldn’t want to go outside because it is so cold. And if there are students like that – what if they’re younger? Who is going to walk them to school when their parents probably work all day?”

Her mother would tell her if she worked hard enough, it would pay off.

“It did, and with that, I got a full ride to Michigan State,” she says.

She will be the first in her family to go to college, and she plans to become a teacher.

“I feel like I can come back and tell students my story and be like, ‘You can do this, too,'” she says. “We need more people to come back who are successful and tell them that this is what you can do, you just go for it and you try. And even if you have to walk a certain amount of time, it’s worth it at the end.”