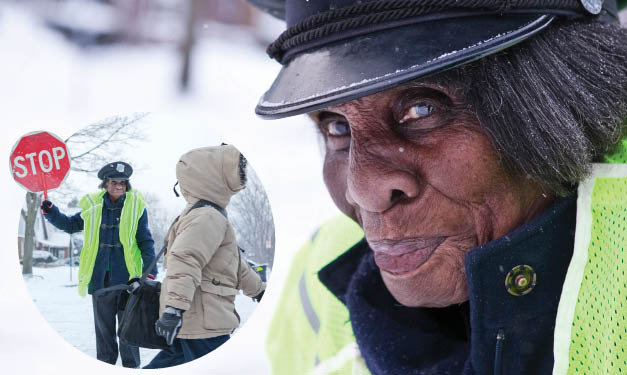 Freshly fallen snow blankets the streets on a bone-chilling morning in the city. At 8 a.m. on a school day, there is hardly anyone in sight in the neighborhood surrounding Stewart Performance Academy on Detroit’s east side. In spite of the bitter temperatures and snow, classes are in session and, soon enough, students will flood the streets.

Mary White, age 94, stands near her post at Wildemere and Buena Vista, ready for the children to arrive. As the school’s crossing guard, she waits morning after morning for kids to make their way to school. This has been the norm for her for 53 years.

As children approach, she holds up her stop sign, signaling all cars to come to a halt – and, with an “OK, let’s walk,” she safely helps kids cross the street to get to class.

She’s at that corner every morning and at dismissal each afternoon – rain, shine, snow or sleet.

Her motivation? “Just having a connection with the kids,” White says. “I love kids and I do it to protect them.”

“My husband told me, ‘Don’t you ever get out of that uniform,'” she says. And she’s been wearing it ever since – five days each week, from one school year to the next. She loves it and the community adores her.

“I’m well known,” White says. “I’ve been all over the west (side of the city) with these schools.”

Her popularity is no surprise. After decades in the same position, she’s met generation after generation of families. Including that of Detroiter Patricia Oliver – who slows down her car, leaning out the window to share her story.

“I have a sister that is 47. (White) crossed her off on her first day of school,” Oliver says. “I’ve known her that long.”

White is among 140 crossing guards that are employed through the Detroit Police Department’s Traffic Safety Unit, according to White’s supervisor, officer DeJuan West.

“She has been here the longest,” West says. “She’s seen a bunch of folks come and go.”

White is a survivor in her family, too. Of her four children, White has outlived three, along with her husband. As for grandkids, she says, “I’ve got oodles.”

And she’s practically an honorary grandma, too, watching over many of the school’s 335 kids as they trek to class each day.

In fact, White’s so popular in the community that while she’s on duty, residents slow down to wave, or, like Oliver, roll down the windows – even in the frigid air – to say good morning.

Just as White looks after the neighborhood’s kids, the residents keep an eye on her.

“My neighbors, all these neighbors in here, they tell me, ‘We watch you, because ain’t nothing going to happen to you,'” White says.

The police department keeps a watchful eye on White and all the crossing guards, as well, so safety is not an issue.

Chris Johnson, the principal of Stewart Performance Academy, has witnessed White’s impact on students and families firsthand since taking his position as school leader in November 2012.

“It’s just a familiar face, and parents have said that they feel more comfortable allowing kids to walk to school,” Johnson says.

Because Stewart Performance Academy is a neighborhood school – and Johnson says it has only two or three buses for transportation – White’s job is extra important because so many kids walk to class each day.

And White has no intention of slowing down.

“I tell everybody I’m going to do this till God says you can’t do no more.”