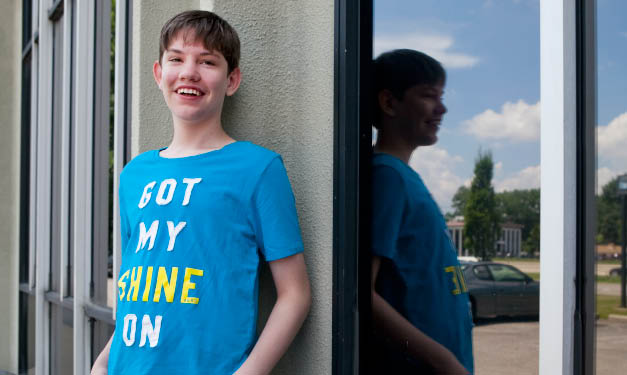 Fifteen-year-old Nick Brown just wanted to have friends, but those friendships came at a cost – constant bullying – that took an emotional toll and had him wanting to leave school. But with help from Easter Seals Michigan, he now has true friends and a true purpose – stopping other kids from being bullied like him.

The start of the school year brings new experiences for all children – different teachers, a transition from elementary to middle school, perhaps taking the bus for the first time, or maybe just struggling to fit in. Unfortunately, for some kids going to school might also bring other challenges in the form of bullying.

In the 2008-09 school year, the most recent statistics available, 28 percent of students ages 12-18 reported being bullied at school, according to the U.S. Department of Health and Human Services. Overall name-calling and insults were the most common type of bullying, but students also talked about being threatened with harm, pushed, shoved and cyberbullied. Twenty percent of girls and 25 percent of boys said they had either bullied, been bullied or both – at least two to three times or more a month.

For parents looking for support and services for their children – whether the child is the one bullying or being bullied – Easter Seals Michigan offers a variety of support programs to help families.

When Sharon Brown’s grandson, Nick, began getting angry every day after coming home from school last year, she wondered about what might be upsetting him. “The moment he got out of school he’d slam the door and just get angry and say, ‘I’m never going back there. I don’t like that kid. They all hate me there,'” recalls Brown.

The 15-year-old already had difficulties fitting in at school because of his disabilities. Nick is on the autism spectrum and also has attention deficit hyperactivity disorder (ADHD). The bullying at school seemed to affect Nick in different ways, including triggering in him both anger and depression, eventually requiring hospitalization in February of 2013.

“Nick’s very, very quiet about things. You have to pry things out of him,” says Brown. Nick did admit to his grandmother one reason he was reluctant to talk much about the bullying – he just wanted to have friends, even if it was with those who were constantly making fun of him.

Brown met with administrators before Nick returned to school. Representatives from Easter Seals participated in the discussion to support Brown and to see how they might lend additional assistance outside of school.

“Supporting children and families within the school environment is an essential and expected component for effective treatment,” explains Brian Edwards, a family support specialist at Easter Seals Michigan. “Oftentimes, parents and children enter service with a long history of frustration and failure with their school experience. Easter Seals works alongside teachers, school social workers and administrators to create an environment of safety and success at school.”

Edwards notes that Easter Seals tailors its services to match the individual needs of the family.

“For some families simply making phone contact with school staff on a regular basis is enough,” he says. “For others, more intensive interventions are necessary.”

A turnaround for Nick

The school worked with Brown to develop in-school strategies for Nick to let others know when he needed help. Along with therapy services, Easter Seals made sure Nick became more involved with his peers. He’s a member of their Teen Advisory Council, or TAC, where teens meet regularly to socialize and to plan community activities. He also has a mentor from Easter Seals who comes to the Browns’ home twice a week to hang out with Nick.

“At the Teen Advisory Council, the kids can talk about things that are happening in their lives without having parents around. We’re not allowed,” laughs Brown, who participates in Easter Seals Parent Advisory Council, or PAC. “It’s good for them. They have a good time. They’re thinking about things where they can get involved in the community.”

Standing up against bullying

One way the teens from TAC determined they could help the community was to raise awareness about bullying. Edwards says that the teens were the ones who came up with the idea to focus their efforts on stopping bullying.

“Easter Seals Michigan owes a lot to TAC,” he says. “They’ve led the charge on anti-bullying and we’re supporting their efforts in every way we can.”

The teens developed a “Stop Bullying” pledge that they and other teens can take, designed T-shirts to showcase this pledge and even planned a rally against bullying.

For Brown, Nick’s involvement in Easter Seals has helped her understand how to help him through difficult times, and to address his social and emotional needs at home. “I don’t know where I’d be without them,” Brown says.

Signs and what parents should do

Edwards, who directly counsels teens who’ve been bullied with Easter Seals Michigan, says parents should be aware of these possible signs of bullying:

And, if you suspect that your child is being bullied: