Hoping to keep your school-age kid sharp over vacation? Discover simple advice and learn how to nurture your writer, from pictures to prompts. 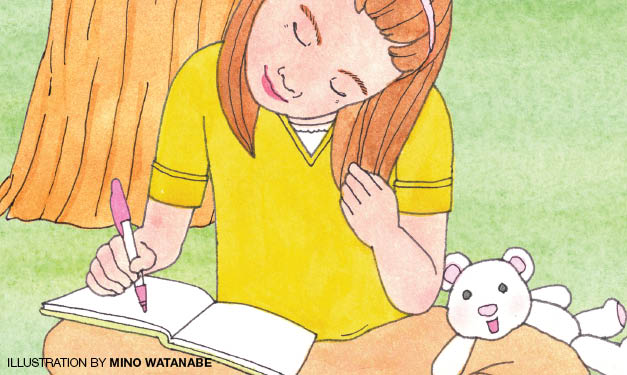 Writing is a great way for kids to express what they think, feel and imagine. It’s also a perfect trick to keep their brains sharp during the summer and boredom at bay. Perhaps your son could pen a graphic novel, with few words but lots of detailed pictures of characters. Or maybe your daughter writes an epic adventure of vampires and mermaids who join forces to save the world’s kitten population. (Hmm … now there’s an idea!)

Telling stories will surely amp up their writing skills and creative instincts. Here’s how you can encourage them to channel their inner author this summer.

Have early elementary school-aged kids draw a picture on white paper. Encourage them to write a simple sentence about what they have drawn on the open space.

Next time, gently urge them to write more by asking questions about their drawing. What is going on? What person did you draw? What are they doing? How are they feeling?

Once complete, hang their result in your house to promote their hard work. This skill of simple story writing about a drawing is a big focus in the early elementary school years.

For older elementary-aged kids who are beginning to engage in creative writing, give them some starting points to get their creativity going. Read one of the following writing prompts and encourage them to write a paragraph. Start with just one prompt at a time.

After you’ve gone through them all, think about your kid’s interest and come up with some writing prompts tailored just for him or her. It will be easier than you think.

If you could be an animal in the world, what animal would you be? What do you look like? What moves can you make, like flying or climbing trees? Where would you live and what would you eat?

Imagine you are riding on a flying carpet. This magic carpet could take you anywhere in the world. Where would you go? What would you see and do?

If you could fly like a bird or swim like a fish, which would you chose? Why? What would you do if you were a bird or fish?

When you’re out, tell your child to notice a person to later turn into the main character of a story. Perhaps it’s a distinguished-looking old man at the Detroit Institute of Arts. What was he doing there? Was he masterminding a great art robbery? Or maybe meeting a long-lost love?

Start by introducing one of these writing exercises at a time to your kid. If you think one is a bit advanced for them, go ahead and let them try it. You want them to be challenged; that’s how their skills will grow.

Writing well is a valuable life skill that will benefit your children now in becoming better overall students – and later for being effective communicators throughout their lifetime.

Kid grappling with handwriting skills? Discover additional tips to help him develop. And don’t stop with prose: Give your kid a hands-on arts smart boost, too, in photography, sculpture, music and more.

Feeling stuck indoors? Get the entire family on their feet with these free online workouts!
Read more
School Issues