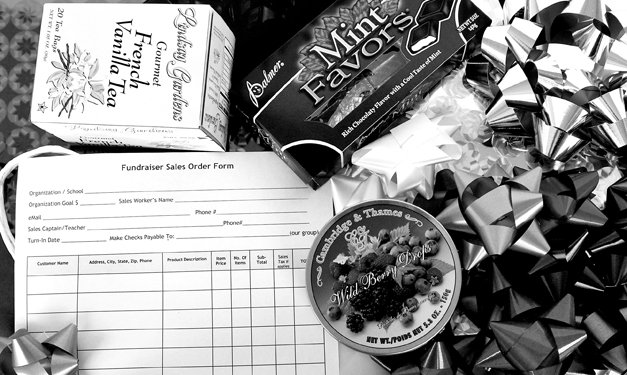 Rebecca Bates has admitted she’s no fan of traditional school fundraisers. “I pretty much hate them,” the Rochester mother of three says.

“I do understand their purpose, and I have no problem giving money. But I usually don’t like the product, I certainly don’t need it, and it’s super overpriced.”

In the best of times, receiving piles of fundraising packets and lots of pressure to buy overpriced wrapping paper, candy, frozen foods and cookies can be vexing to parents. In tough times, it can be downright stressful.

Years ago, when Jill Kathan of Livonia was preschool shopping for her daughter, she learned one school would require parents to sell $150 worth of cookie dough each year.

“I think when parents feel they are obligated to donate, they get an attitude and they don’t want to do it,” she says.

An informal survey of Detroit-area schools shows many school groups continue to use direct sales to raise funds for everything from field trips to playground equipment.

At Leonard Elementary School in Troy, parents have been inundated with all manner of fundraisers, from a fall wrapping paper sale to weekly bagel sales in classrooms. Past PTO President Shelly Volek estimates that at one point, her group was running up to 20 separate fundraisers each school year.

“There’s the constant struggle of what’s better – one big fundraiser or a million little ones,” Volek says. “I guess I’m of the school of a bunch of little ones, so that you can spread it across people and keep everyone involved. The more, the merrier.”

Thanks to parents’ volunteer efforts, Volek says that in the past, the PTO raises has raised about $45,000 a year to spend on student services and school equipment that benefits kids.

While it’s impossible to ignore the benefits of vigorous fundraising, it’s also clear that not every school can rely on parents to put in dozens of parent school volunteer hours or have the money to pay for so many goods and events. And some parents just don’t think it’s worth all the hassle.

At Saline High School, groups raise their own funds – but in the past, the PTO has reported it doesn’t bother with organized events or sales. At the beginning of the year, it simply asks parents to write checks to the PTO.

“We call it our Hassle-Free Fundraiser,” says former Saline High PTO president Diana Watches. “Twenty-five dollars or more is wonderful. Some people are very generous, but people just do what they can and we appreciate it.”

Dale Hollandsworth, now-retired from Kroger, says Community Rewards has raised about $2 million a year for nonprofits. “It is our way of giving back to the community and engaging customers into more community activism,” he says.

Scrip cards are another popular, simple fundraiser. Parents can order gift cards for use at various stores, and the school receives a small percentage of the card value. Visit the Great Lakes Scrip Center to learn more.

Why give 75 percent of your fundraising dollars to some distant company when you can create your own event and keep most of the dough? A hot-ticket solution is the fun run.

North Elementary School in Newport, Michigan is among those schools that have held a fun run – much to the delight of parents.

“There’s nothing to buy and no catalog to look at,” explains Melanie Young, whose child attended North Elementary in the past. “I always buy something, whether it’s a box of candy or a magazine. But this was promoting the health of the kids, so that was a better incentive for me to donate – and it goes right to the school.”

Each child received a class T-shirt, which Young says they all loved to wear to school again and again.

Before the holidays one year, the Mayfair Co-op Preschool in Farmington Hills sold teas from a local tea shop. Mayfair mom Katie Bonus took advantage of the sale.

“That’s what we gave out to all of our family members as Christmas gifts,” she says. “It was great because we were buying local and supporting the school at the same time. And the tea is delicious.”

Do kids learn anything when mom and dad sell PTO cookies at the office? Not really. So how about holding creative school fundraisers that teach kids something important?

“They sent home little license plates for the kids and pamphlets about bike safety they could decorate. The kids really enjoyed it,” says mom Jill Kathan.

Fundraisers can also teach generosity and caring for people outside of the school community. Following an earthquake in Haiti, the students at Berkley’s Norup International School decided to raise money to help rebuild an orphanage there.

They held a pie-throwing event where, for $1, students could throw a whipped cream pie at their principal and a few teachers. The brave staff and thrilled students raised $475 for the cause.

7. Useful services for parents and students

Just in time for Christmas, Hamilton Academy in Detroit once offered families reasonably priced photo packages with holiday backgrounds or with Santa himself.

Teachers helped organize the event so that siblings could be in photos together, saving parents even more money.

In the past, Saline High mom Deborah Heilman helmed fundraising for the school’s Students Against Destructive Decisions organization. She wanted to select fundraisers that were earth-friendly and easy.

“I kept thinking about what could make life easier for parents, instead of selling door-to-door,” Heilman says. “And where do all those products end up?”

In addition to selling the convenient Scrip gift cards, the group has collected small electronics that might end up in landfills and sent them to a recycling organization for cash.

“I box it up and they give me the postage, pick it up and then send me money and recycle the stuff,” Heilman says. “It’s easy for us, keeps stuff out of the trash and we’re saving the Earth.”

Did you know the Michigan Lottery allows legal poker games to benefit nonprofits?

These creative school fundraisers are generally less like a casino night in the gym and more like a bingo night at a designated site. Players can come from the school community, but also the card-playing public.

“It sounds strange, right? A preschool hosting a poker night?” says Katie Bonus, a Mayfair Preschool mom. “But it was great for us.”

Bonus was involved in two four-day poker events. Each event raised about $1,000 for the school.

The mother of all school fundraisers in the Detroit area has to be the Ann Arbor PTO Thrift Shop. Started back in 1993 as a garage sale held at a school, the concept has grown beyond imagination.

Today the district PTO’s shop occupies a 22,000 square-foot building in an area of Ann Arbor called Resale Row. It accepts donations of clothing, furniture and most everything in between from parents, the community, area businesses and colleges.

In the past, in a year’s time, the shop has pulled in upwards of hundreds of thousands of dollars, which it in turn donates to Ann Arbor Public Schools’ clubs and organizations.

And the benefits don’t even end there. Donations to the store are tax-deductable for parents. The second-hand products are being recycled and are inexpensive. And the shop even employs full- and part-time employees.

This post was originally published in 2011 and is lightly updated regularly. Source details are accurate as of the time of publication.