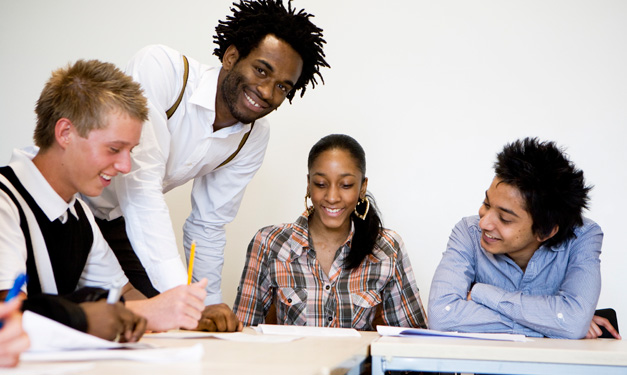 Little fish in a big pond. That's how a lot of kids feel when they walk through the doors of high school for the first time. Spooked by juniors and seniors who tower over them, they try to traverse a maze of halls in a school twice as big as their previous school, all while trying to handle the independence and responsibilities automatically foisted upon them now that they are "high school" students.

It's a sink or swim situation, and for many kids – too many – it's tough treading water. The U.S. Department of Education tracks high school dropout rates which, while improving slightly, remain a concern. Education Week's annual "Diplomas: Graduation by the Numbers" reports concerns, too – particularly for Latino children. (On the whole, though, from 1999 to 2009, it noticed a 7 percent rise in public-school graduation rates, hinting at some hope.) And the Alliance for Excellent Education puts Michigan rates at around 75 percent – meaning about a quarter of Michigan high schoolers don't graduate.

Many of those students drop out during or soon after their freshman year, notes the National High School Center in Washington, D.C., which says a student's ability to acclimate and academically achieve in freshman year is a telltale sign of her future academic success – in high school and beyond.

As a result, educators are now targeting freshman year, offering some "water wings," if you will, to give kids extra help making the transition to the high tides of high school. In some metro Detroit schools, this help is coming in the form of freshman academies.

What are freshman academies?

Freshman academies vary, but most include extra staff attention to students' fears, concerns and questions, plus upperclassmen peer programs. Some even segregate freshmen in a particular area of the school, so they don't have to be so overwhelmed with the size and scope of the larger high school.

At Redford Union High School, English teacher Steve Beaulieu says he has seen better student grades and attendance after a freshman academy was implemented for the class of 2011. He says the program sends a strong signal to freshmen: They can't afford to slack off on their class work.

"We are investing a great deal of time, effort and resources," he says. "Therefore, they have a tendency to take their education much more seriously."

Redford Union, like other Michigan schools, has to keep an eye on its students' performance in light of the federal government's Adequate Yearly Progress benchmarks under No Child Left Behind.

Research shows most students send distress signals years before they drop out of school, according to the Michigan Department of Education. "In fact, key early warning signs displayed by students nearing or entering transitional school years," such as ninth grade, "have been proven to be strong dropout predictors," its website notes.

Beaulieu says local school districts serve their freshman in different ways. In the Utica School District, some of its high schools only serve grades 10-12, and many ninth-graders go to a junior high instead, he says.

At Redford Union, counselor Paulette Rancour says incoming ninth-graders get a taste of their new academic climate through a process that includes a special freshman night for students and parents.

In addition, older students play a role in helping the new students feel welcome. "We have our student government students give tours of the building, and we set up tables to boast different school activities in the cafeteria for the incoming freshman to get information about groups, organizations and athletics," she says.

Rancour says the freshman academy program is an effective bridge to high school life because it creates a more compact learning environment.

"We have a single hallway where their core classes and teachers are located," she says. "They have a separate lunch period, and they have teams of teachers who get to know them on a more personal level and have a common preparedness to discuss issues with courses and students."

Beaulieu says the ninth graders follow each other in between core classes and are kept apart from other grades. The school tests students' abilities right away, so struggling readers are placed in a supplemental English class. And teachers regularly call parents and stay in touch with them through emails, conferences and more, he explains.

Without the program, he says, new students might find the structure of high school life unfamiliar and overwhelming. "Students are creatures of habit," he says, "and while they would never admit it, they crave structure and predictability."

According to a 2007 study from the National High School Center, high schools with transition programs for freshmen had a dropout average of 8 percent, while the dropout rate of schools without these programs averaged 24 percent.

Beaulieu gave some raw figures to back up his freshman academy's effectiveness. The year before the program began, the freshman class had 220 suspensions. But during the next year – once the program was in place – the suspensions plummeted to 45 and held at that level the following year, he says.

Tardiness has also dropped by 85 percent, Beaulieu adds, and the rate of students who failed two or more of their core courses declined from 30 to 25 percent.

One student who has passed through the freshman academy says it has advantages and disadvantages. Tom Michalak, who graduated from Redford Union in 2011, remembered how the program helped him grow accustomed to high school by placing his classes next door to one another. However, he says he sometimes felt isolated from the rest of the school building and the older students.

"It kind of kept us secluded. It almost didn't even feel like we were in high school," he says. "They didn't let any upperclassmen in the hall at all."

Another school that has adopted a freshman academy program is Dearborn High School. Language arts teacher Susan Bernys says that freshmen who get good grades in their first year tend to continue to succeed in school and stay the course toward graduation.

"If we can get them to do one sport or activity the first semester, and they do decent in their classes, that's a success for us," she says.

According to Bernys, Dearborn High School's freshman program begins with a parent/student meeting in February. Around the time of the August freshman orientation session, the school gathers juniors and seniors who earlier agreed to join the Link Crew, a project affiliated with the California-based Boomerang Project. Link Crew volunteers mentor the incoming freshmen while the latter get their schedules and meet faculty, Bernys says.

Early in the school year,
the freshman class engages in social rituals. For instance, kids visit the football field and stand in a formation that represents the number of their graduating class year. Special events like a tailgate party and honor roll breakfast also promote camaraderie and make the school a "home away from home," she says.

"The more a student participates and has enthusiasm in their school, it's all the better they'll do in school," Bernys says. "It's the student population – it's not the building or how many facilities that you have."

Dearborn High School runs its ninth-grade academics through its freshman academy, which is based in a wing of the high school building. The wing houses the freshman lockers, and ninth-grade teachers are selected based on personality, so they can make the students feel more comfortable, she adds: "They're not totally coddling, but they're friendly and welcoming."

Bernys says the students learn their math, English and social studies in the freshman wing and spend the remainder of the day at lunch or in electives with the rest of the student population. By sophomore year, the students stay "out in the open," she says.

Although the freshmen are years away from grabbing their diplomas, Bernys says it is never too early to stress the importance of acing final exams. She says the Dearborn district offers tutoring sessions where teachers and National Honor Society members tutor freshmen before their finals. "We'll probably have about 100 freshmen participating in tutoring for final exam week," she says.

The Dearborn district also has a pre-emptive program in place to adjust potentially struggling eighth-graders to the realities of the high school classroom. She says an Early Start program gathers for 12 days in the summer, which lets kids meet their ninth-grade teachers, get acquainted with the building and learn key concepts on a subject they might see during the school year.

As an overseer of the freshman program, Bernys says she frequently contacts parents and emails teachers when she finds that students are struggling. For the most part, parents have been satisfied and happy with the program.

"We send out grades every three weeks, a progress report, if (anyone) gets a C-minus or below," she says.

The Dearborn and Redford Union high schools are not alone in taking early, aggressive efforts to direct high schoolers toward success.

Over at Warren Mott High School, counselor Patricia Bonnici says that her school also uses the Link Crew program and its team-building activities as part of a freshman outreach campaign. The school has study programs in place, too, such as its second semester pullout program for ninth-graders who fail two or more classes.

The intervention program takes place during the day, so it doesn't conflict with many freshmen's need to take the bus back home, she adds. "We took them out of one of their electives, met with them, tutored them (and) monitored their grades," she says.

However, Bonnici blames challenging times for changing how her school handles its ninth-grade needs. She says her school had a freshman academy for six years, but it no longer has one today.

She blames its end on the economy. "Every district in the state is under severe budget constraints," she says.