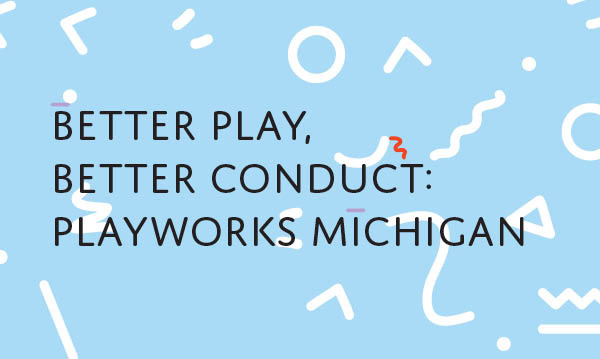 Negative school playground experiences are, unfortunately, often part of childhood. But a national nonprofit called Playworks is changing that with play and games that boost kids’ social and emotional learning. And it’s growing here at home.

“Recess can be a difficult time during the day, with a lot of conflict that kids have a hard time resolving,” says Angela Rogensues, executive director of Playworks Michigan. “Adults and kids aren’t always given the tools to create a safe and inclusive space, and (conflict) spills over into the classroom.”

Over the next two years, 15 Michigan schools, mostly K-5, are adopting Playworks thanks to a major grant. Joining districts like Detroit, Ferndale and more, they’ll get training and learn strategies to “run their own version,” Rogensues says.

Playworks has a library of games that are inviting, cooperative and deemphasize specific sports skills. Foursquare is designed so kids continually rotate through, allowing a schoolmate to take their place. When a child leaves a game, high-fives are exchanged and coaches encourage phrases like “good job” or “nice try,” focusing on effort vs. result. Or, in “animal tag,” a tagged player continues to play, but as a different animal than before.

The research-based techniques are geared at making recess safer, inclusive and focused on social/emotional wellbeing.

As a result, Playworks – active in Michigan since 2012 – estimates state schools save 22 hours of instructional time per year, or eight minutes each day: “Kids were able to play during recess and return to class ready to jump back into learning,” says Rogensues.

Schools in these local districts have adopted Playworks: