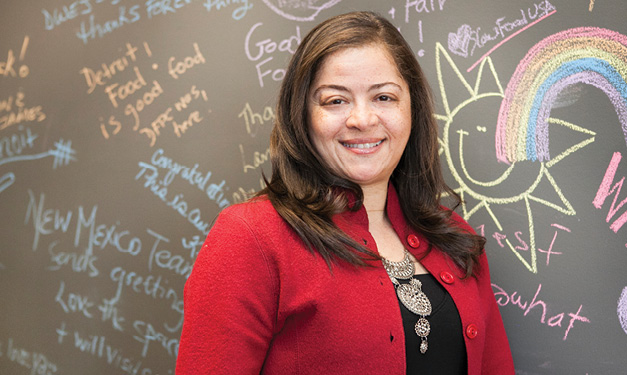 If Sharnita Johnson had to use one word to describe Detroit and its residents, it's this: resilient.

Born and raised in the Motor City, the program officer for the W.K. Kellogg Foundation has committed her life to helping those in need. The mission is personal.

"Primarily, my passion comes from being a Detroiter," she says. "I once was having a conversation with someone and said, 'They need to do something about that.' I realized that I was the 'they.'"

With more than 20 years of experience in the nonprofit sector, Johnson joined the Kellogg Foundation in 2012 as a program officer. The Battle Creek-based organization recently opened a new office in Detroit, housing Johnson and several other staff members, including Edward Egnatios, Linda Jo Doctor and Lan Pham.

Johnson works with the foundation's Michigan team. Her responsibilities include reviewing and recommending proposals for funding, conducting site visits and maintaining relationships with grant seekers and external partners.

In addition, she manages and monitors a portfolio of active grants – and provides technical assistance to grantees on model development, partnership negotiations, leadership capacity building and coaching.

"The proudest moments I feel is that I have a career that I'm matched to. I love it," Johnson says. "This is my home."

The youngest of six, Johnson was born on Detroit's west side. Her father still owns a little grocery and party store, called Fenwood Market, which he opened 40 years ago. The neighborhood was one of the epicenters of the city's civil rights movement, she says. Her mother was a social worker, helping instill the principles of giving and helping others.

"My parents were my first role model," Johnson says. "Neither of my parents had a college education. My mother went back to school as an adult," to become a social worker. "My father was an entrepreneur. To me, they were the epitome of hard workers."

Johnson attended St. Mary's of Redford for grade and high school. The Catholic education was very important to her mother, Johnson says. It's one of the reasons she went to Marygrove College, to continue the Catholic schooling. Before getting a master's of public administration degree from the University of Michigan-Dearborn, Johnson earned a Bachelor of Arts degree in English and history at Marygrove.

"I wasn't sure what I was going to do with that," Johnson says. "The only thing I knew was that I wanted to make a living writing, but I didn't want to be a journalist."

Still finding her way through the post-undergraduate college world, she took as job as a receptionist at metro Detroit advertising agency Campbell Ewald.

"Eventually, I got the job I should've had from the beginning, which was an editorial assistant," she says. "I was able to write."

She had an ongoing column at the agency and did that for a while, because it was her passion. But then, around the 1990s, the economy somewhat tanked and she was without a job. Shortly thereafter, she saw a position available at Detroit's Charles H. Wright Museum of African American History. It wasn't the museum that's there now. It was much smaller in size and scope.

But it was there that the first moment of clarity struck. One night, when the facility was closed, Johnson found herself standing in this museum that was dedicated to the history of African-Americans – not just the slavery era but the accomplishments, perseverance and resilience of African descendants.

The other experience came after a busload of Detroit Public Schools students visited the museum.

"The realization when they saw themselves on the walls as doctors, scientists and performers – I could see in their eyes that they recognized themselves," Johnson says. "I thought, 'This is what I want to do. This is the stuff that I care about.'"

The experiences led her to the nonprofit world. At first, it never occurred to her to work at a foundation as a program officer. Mostly, she says, that was because there were very few people of color who were working at these foundations. Her first job was in 2001 with the Ruth Mott Foundation. She cut her teeth there for three years before joining the Skillman Foundation.

"At the Skillman Foundation, I learned a lot about community activism and organizing," she says. "I was humbled every day by ordinary people who get up and not only make a difference in their community, but believe they can."

At Skillman, she served as a senior program officer ,where she managed a multi-million-dollar grant portfolio in the program areas of neighborhood development, arts and culture, and youth development. Eventually, her work led her back home to the city she loved. While the Kellogg Foundation has been working in Detroit since the 1930s, the Detroit location provides the foundation with a place to convene grant recipients for meetings, networking opportunities and other gatherings designed to advance their work in the city.

In the short-term, Johnson says the Kellogg Foundation is focused on trying to learn about the communities it works in. In the long-term, she wants to find transformation and how to get there.

"I get to work with people who are passionate," Johnson says. "And as a person of color in this field, I feel very privileged and I feel I have a responsibility to be working in this field and making a difference."

Made even better is that the path Johnson's life took allowed her to understand the similarities between mother and daughter in a much different light.

"I never really made the direct connection between my mother and what I do," Johnson says. "But after time, I realized that what she did was really about helping people. She talked about how people helped each other, more so out of necessity. She had great empathy as a social worker. She instilled in us that we could do anything."

Is your teen complaining that they're bored? Find upcoming events and at-home activities that teenagers will actually enjoy.
Read more
Health

It's a given for grown-ups but new turf for little ones. So how do you teach kids to wipe their butts properly? A metro Detroit pediatrician has the scoop.
Read more
Attractions

Come visit your favorite deep sea swimmers at some of one of these aquariums in Michigan and Ohio that feature both fresh and salt water.
Read more
Guides