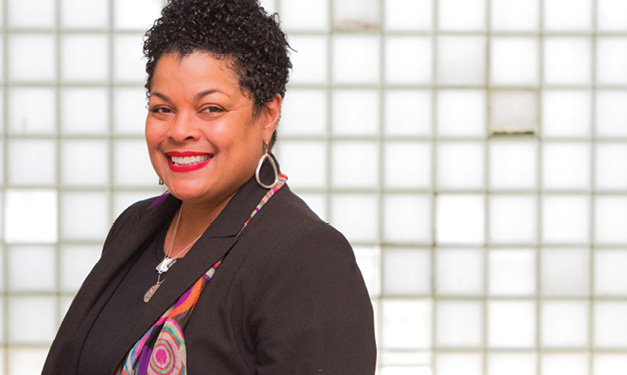 She had just left a corporate job when the call came, asking her to lead a new educational effort in Detroit. Tanya Heidelberg-Yopp has spent the last year getting the program organized and prepared. And this fall, Linked Learning is fully launching in eight high schools with hundreds of students.

"The idea is to prove the concept, then we can lift up and expand," says Heidelberg-Yopp, Linked Learning's CEO.

"The hope is to find an area of fascination for that student, and that becomes the lens through which we deliver important content and capability. They may find they hate one area, which is as important as figuring out you love it," Heidelberg-Yopp says.

This Detroit native is a relative newcomer to education administration, but not to creatively approaching problem solving. A Cass Tech grad, Heidelberg-Yopp attended Syracuse University, earning a bachelor's degree in telecommunications management, a credential that would come back into play later in her career. She first went to law school, graduating from New York University and heading into corporate law.

"It was a very super structured thing, but it gave me a whole lot of work ethic," she says. Seeking a workplace that would allow more creativity, she moved to a firm specializing in entertainment law, which led to positions at MTV and Nickelodeon, where she helped launch the kids' movie division.

In 1998, home beckoned, and she and her husband made what she calls an "abrupt but definitive decision" to move back to Detroit. They opened a nightclub, sold a TV show to BET and planned a career in the music business – just as Napster evolved and "the music business blew up into tiny shrapnel."

Still, ever evolving her career, Heidelberg-Yopp worked for the Motown Center Project and then Compuware. "I brought my odd set of skills," she says. She ran the sales operations and then became responsible for the company's "internal culture" and its diversity and sense of community. In trying to recruit qualified local "talent," Heidelberg-Yopp says she began to see the dynamics that would become part of Linked Learning.

"I was wondering why we couldn't do something at the high school level. Instead of having our engineers go out and paint a school or build a playscape, why couldn't they help teach software development? It's a much better use of their time," Heidelberg-Yopp says. "Why couldn't we create work-based experiences and real-world experiences to help students learn IT? And then hopefully do enough with them that they would want to work at Compuware when they finished."

Her time at Compuware ended before she could complete a formal proposal or program. But then, the call came from Linked Learning.

Linked Learning is an approach to education that partners schools and employers, so that students apply "lessons" in workplace settings. Students work on projects with oversight from employees at local companies and their teachers as they seek to solve "real-world" problems both in established workplaces and their neighborhoods.

In doing so, students are exposed to jobs and workplaces, which Linked Learning says helps them make career decisions. They also gain an appreciation for how classroom lessons are relevant in the workplace, which helps with motivation and comprehension, the thinking goes.

When launched, Linked Learning was first supported by foundations on the West Coast as it grew and expanded from its initial nine districts into 63. Education advocates in the Midwest learned of it, and the Ford and Skillman foundations are funding Heidelberg-Yopp's efforts.

Heidelberg-Yopp has spent more than a year recruiting schools and helping teachers and principals learn about the program as they prepare to fully implement it in the 2014-15 academic year in eight schools: Cody Academy of Public Leadership, Cody Medicine and Community Health Academy, Detroit Institute of Technology at Cody, Osborn Collegiate Academy of Mathematics, Science & Technology, Benjamin Carson High School of Science and Medicine, Detroit Edison Public School Academy, West Side Academy and Henry Ford Academy: School for Creative Studies.

"The table is set to really try to make these differences in terms of academic achievement, but more importantly creating a process that makes high school relevant and engaging for young people and connects, so they can see what their career or job will be."

Heidelberg-Yopp doesn't call Linked Learning a "program" or a "method," but instead an "approach" because it's flexible for students, teachers, schools, working professionals, companies and projects. She defends potential criticism that the approach is too rigid, insisting that multidisciplinary lessons can be taught and learned in various professional fields.

For example, a project for students to design "green" lighting for a neighborhood walkway also requires them to write about their effort and share their design through social media. In a medical/community health setting, students learn about marketing.

"What's most important," Heidelberg-Yopp says, "the academics are going to be delivered obviously through instruction but also projects. It's not that you're abandoning one for the other, but even in straightforward instruction, teachers are urged to make the connection with the real world in order to make the lesson relevant."

Her corporate background has helped her find metro Detroit companies that want to be engaged. She'll announce the list of participants later this fall. Through Linked Learning, she's connecting educators with curriculum resources. In her vision, the approach will be a natural part of education in the future. After all, it helps educate and train students for jobs with input, buy-in and commitment from the employers who will hire them.

"Obviously there have got to be hardcore academic measures, but as a region, what kind of young people are we putting out; what do we want to see?" she says. "If we can identify that and drive it into the schools, I think we can really start to make moves."