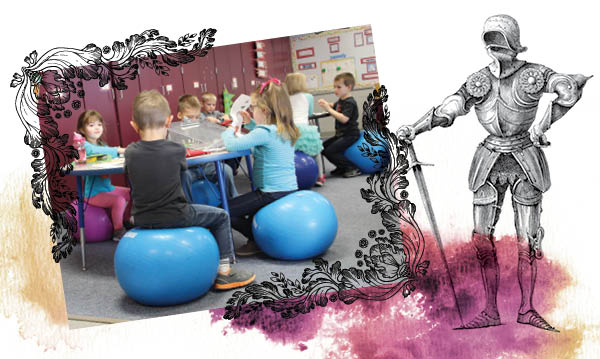 What do exercise balls as chairs, national achievement awards and a career internship have in common? They’re all cool stories coming out of schools right here in southeast Michigan. Read each of these local briefs to get the scoop.

Giving kids bouncy, colorful exercise balls in place of chairs at their desks seems like a bad idea, right? Not so for four elementary schools in Howell Public School District. Rather, it’s helped with behavior, focus, academics and health.

In today’s classrooms, “We have more academics and the curriculum is more rigorous,” says Elizabeth Moyle, a begindergarten (pre-K) teacher at Challenger Elementary who’s been using the balls with her 4- and 5-year-old students for three years now. “This is a way for them to move and get that physical activity.”

It all began about five years ago, when Marlee Gariepy, a fifth grade teacher at Voyager Elementary, researched the benefits, particularly for students who struggle to focus. “I thought, ‘Why not try it out and see how it works?'”

Turns out, it did work. Other teachers jumped aboard. And the district recently began publicizing the effects, which Moyle calls “tremendous.” She incorporates the balls into her counting and letter-sound lessons. Gariepy adds that the ability to bounce, roll and move improves focus. Kids balance and build core muscles, too.

“Their natural kinesthetic energy (and) need for movement is being satisfied in a positive way,” Moyle says.

Seven southeast Michigan schools now sport a 2015 National Blue Ribbon Award, and these high achievers have bragging rights. Of the nation’s 335 winners, praised by the U.S. Department of Education for either outstanding academic performance or their work toward closing achievement gaps, only 13 Michigan schools won – and all for awesome academics. They get to keep the designation forever (the award started in 1982). Here are the local “exemplary high performing schools.”

High school seniors are about to get some valuable real-world experience under their belts with the new Hazel Park Career Fellowship Program.

This summer, it is providing select Hazel Park students entering 12th grade internships at a local businesses or organizations, like the city’s parks and rec department, the school district – or LJPR Financial Advisors in Troy or Ferndale Electric Company, Inc. both run by HPHS alums. Students earn at least minimum wage for 20-30 hours of work per week over six to eight weeks. They also get mentorship and training in “life skills that will be beneficial to them in the workplace” and beyond, says Kayla Roney Smith, executive director of the Hazel Park Promise Zone and College Access Network. The fellowship is a joint initiative of both, plus the city and schools of Hazel Park.

“For most of these students, if (it’s) not their first work experience, it’s their first office experience,” she says. After this initial pilot, the plan is to expand the program into future summers. City students can start applying in February. For more information, email Kayla Roney Smith.