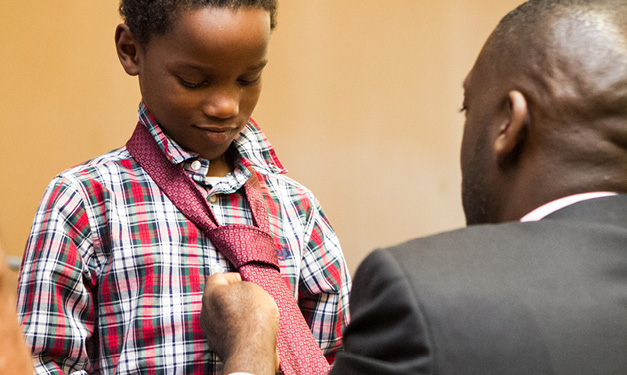 In between campaigning for political candidates and writing a follow-up to a book on black Detroit history, Detroiter Ken Coleman finds time to mentor.

"My mentee is an eighth grade student at Marcus Garvey Academy in Detroit, and I have at least one outing each month," he says. "We go to Lions and Tigers games, movies and lunch visits to Dave & Buster's."

Coleman was matched to his mentee through Big Brothers Big Sisters of Metropolitan Detroit. He began volunteering there but later joined as a board member in 2006. That led to helping to start the city of Detroit's Task Force on Black Male Engagement, now led by city councilmen James Tate and Andre Spivey.

These groups that give male black youth role models and guidance are crucial.

When Wayne County Circuit Court Judge Dana Hathaway tried Theodore Wafer for the murder of Renisha McBride over a two-week stretch this summer, she heard ongoing cases in between. Almost all involved young black men.

One involved a stolen cell phone. Another, armed robbery. Some were as young as 17. They shuffled in, sometimes in yellow scrubs coming from the county jail. No case takes longer than 10 minutes; they're out fast. They're accompanied by lawyers who have argued their charges down as best they could, sometimes having to ask their clients to speak up and face the judge.

They lack the confidence to speak clearly, but somehow had the guts to risk years of jail time. One has to ask – what happened?

There is a lack of support for black boys in Detroit, leaders say, and the system is weakening. Too-young parents who matured alongside their own children, rampant unemployment, lack of male figures in schools, and – perhaps most common – absentee fathers all contribute, experts say.

It's an issue that spans borders as families pick up and leave Detroit for the suburbs. It crosses class, but heavily impacts lower-income households in Detroit. And black males are hardest hit.

A number of mentoring programs targeting black boys and young men in the metro area look to combat these issues. Each has a different approach, but the goal is the same – positive examples and life lessons that give boys a chance of beating the odds.

Norman Clayton Hurns was already working with youngsters but felt a duty to do more.

He works as a counselor at Groves High School in Birmingham but dedicates his spare time to Brothers Making a Difference in Detroit. What started as a small program at Mumford High School in Detroit in 2000 became a full nonprofit six years later.

It starts with third graders.

"Things become more difficult after third grade," Hurns says of tweens interpreting their feelings and expressing themselves. "As the kids get older, it becomes increasingly difficult to turn around behavior, be it from a character standpoint or an academic standpoint." Hurns' program focuses on three tenets: Family, community and self. This stems from his experiences as a counselor.

"In high school, it's trying to weed things out. When the kids get older, you're intervening on things that have happened. Starting earlier, you have that extra opportunity to plant the seed."

More than 600 kids, most from Detroit but some from as far North Carolina, have worked with Hurns. They do after-school tutoring, community service, field trips to college campuses and more. One is now an elementary school teacher himself who works with the program.

Although most of Hurns' work is in the city, he's noticed an uptick in participation from families in the suburbs. "(But) as I look at Detroit suburbs, it doesn't matter. They just need various examples of men doing different things, and for whatever reason it's not trickling down from wherever they're at."

The traits Hurns passes on, like financial responsibility, trustworthiness and helping community, must begin early.

"One obstacle is getting past the narrative that's out there," Hurns says. "(It) doesn't speak to them at this age than as opposed to when they are older."

Marquis Herring knows what it's like to feel abandoned.

His father wasn't around, he says, but, as a student, he found guidance and strength in a music teacher at Detroit's Northwestern High School. "He was more than just my music teacher. He became the father I didn't have," Herring says. "He taught me about responsibility, and those are the same traits I pass on today."

Herring co-founded Mentoring Through Media, which draws young males into using various media platforms to prep them for high school, college and careers.

He calls it a "holistic" approach, speaking to mind, body and spirit. "It's really almost being a father to the fatherless, because you're doing everything," he says.

It started in 2009 while Herring was teaching a broadcasting class at YouthVille Detroit. Few students were interested in being on TV or the radio. But – he noticed many young men wanted space to talk.

"They were hungry for direction," he said. And Mentoring Through Media was born. One goal: It organizes visits to college campuses across Michigan.

"Many of my young men have never been outside the city," Herring says. Community service is also done at Forgotten Harvest, the Detroit Rescue Mission and other more. Media aspects remain strong, and several youth end up getting summer jobs at YouthVille.

But there's also a physical component, Herring says. He requires them to do calisthenics and lift weights, and they play basketball. (Herring also coaches an AAU basketball team.)

Above all is showing the young men – 68 so far – a strong male role model. Herring says most of his mentees face a variety of issues: Born to teenage mothers "who grow up together," financial pressures, families moving from house to house, lack of guidance from other relatives, academic issues and peer pressure.

A constant is the absence of the father. "This year alone, out of 25 young men, just about 12 of them – their fathers are incarcerated."

It's a profound abandonment.

"When you're going through it … it's reassuring to a young man when he hears another adult male that looks the same color as him that says, 'You know, look, man, I went through the same thing.'

"But here's the tagline: I overcame that,'" Herring says.

By no stretch is Odis Bellinger a newbie at mentoring.

He wrote the male responsibility curriculum for Detroit Public Schools and has been an active role model in the city since 1992, mentoring at least 15,000 kids.

As director of the Male Responsibility Leadership Institute at Neighborhood Legal Services Michigan, Bellinger runs a yearlong program that "gives them a road map or a navigation system so they have less bumps on the road."

Like Hurns, Bellinger believes in early interaction to prevent future problems. And like Herring, the vast majority of his students don't have an active father or other male role model. Bellinger's biggest challenge, though? Funding.

"A lot of people say they're going to support you, but they don't," he says.

Bellinger's programs have had backing in the past, but he says it's been increasingly difficult.

"We have no funding. We just do the work. We're in the process of trying to attract funders. Hopefully God will bless us. We're strictly volunteer based. We generally rely on the grandmother on the corner who just sees what we do and wants to help, by making sandwiches or juice."

But the objective remains the same: To empower and educate black males to become responsible leaders. Bellinger offers academic programs and encourages youth to pursue post-secondary education, be it college or trade school.

Many don't verbalize it, but most youth are unaccountable because of their lack of a father figure, Bellinger says. "I used to work in a correctional facility. That's the No. 1 thing I heard: 'I'm angry at my father.' 98.9 percent of issues in the black community have something to do with the father."

Bellinger can relate. But he found a different path.

"I grew up and don't know my father. Up until I was 12 years old, I used to cry a lot and be upset at that. Once I got introduced to the eternal father, I do have a father – I just don't have one on earth."

It's that faith that keeps Bellinger going, funding or no funding. "It's something I'm going to be doing until the end of my life."