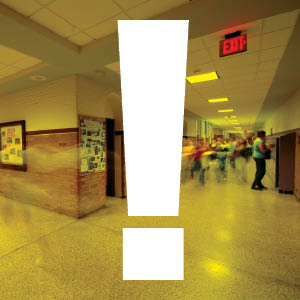 Getting your kid to class and navigating the car loop safely may have been your biggest concerns the first week of school. But a recent Save the Children 2013 U.S. Report on Children in Disasters may have you thinking twice about your child’s safety once they’re inside the classroom.

The report concluded 28 states – including Michigan – rated “unsatisfactory” in meeting the minimum standards to protect children set by the National Commission on Children and Disasters, or NCCD.

Led by Save the Children, a leading, independent, national child-focused emergency response organization, the NCCD was formed to identify gaps in emergency preparedness – it took six months for the last child to be reunited with her family following Hurricane Katrina – and recommend ways to fix them. The commission identified four basic measures needed to safeguard children in emergencies. These include:

Since 2008, it notes, most states still don’t meet the guidelines to protect school kids during disasters, like Hurricanes Sandy and Isaac, the Newtown tragedy and Oklahoma tornadoes. In fact, this year’s Save the Children report card showed Michigan failed to meet all four standards of keeping kids in childcare centers and K-12 settings safe in emergencies. (Notably, it was one of five states that don’t require schools to have a disaster plan to address multiple hazards.)

Before you pack your bags, it’s important to note that while Michigan may not mandate these plans for all institutions like other states (get the big picture on this U.S. Preparedness Map), it’s made strides to safeguard our children.

To be licensed as a child care center, Michigan requires “emergency and evacuation plans” in the cases of a fire, tornado, series accident/injury or other crisis.

Schools have similar laws. Also, notably, in 2011, Michigan was the first state to develop an “emergency preparedness curriculum for schools” – an effort of the Michigan’s state police and departments of community health and education. The goal is to teach kids in grades 1-12 about common hazards and disasters, and to help them develop skills and safety habits to react if a disaster strikes – from power outages and severe weather to violence and communicable illnesses.

An activities-based curriculum, it’s been distributed free to all schools in the state, public and non-public. Ultimately, though, putting this student care and safety into practice relies on action at a smaller level.

For instance, the Oakland County Sheriff’s Office has an emergency preparedness plan that does address multiple crises.

“Each emergency has different policies and procedures that we teach,” says Oakland County Sheriff Michael Bouchard. This summer, his department worked with Oakland County Homeland Security to train hundreds of administrators, teachers and school personnel what to do in case of an emergency. Plans include designated “rally points” where parents would go to reunite with their children.

In regard to the Save the Children report, Bouchard notes, “Results could vary widely by jurisdictions or by types of institutions. Oakland County interacts a lot with both public and private schools.”

He adds, “Our best path is to educate people and get physical barriers in place before an emergency happens. Statistics are very low that (a disaster) is going to happen. Know that we are thinking about it, working and preparing for it. We just want people to be informed, not afraid.”

At the ground level

Some schools go even further, implementing emergency programs. For instance, the Waterford School District, which is in Oakland County, has “incident management plans,” designed with the help of school security experts, law enforcement, emergency management and public health officials.

But it can be challenging, she acknowledges, to find resources to support these initiatives.

Waterford “aggressively” went after grant funding, Lessel explains, so it could afford safety and security initiatives such as campus surveillance, a bio-security and pandemic plan, staff training and an emergency notification system. “In addition,” she says, “we have a community that has supported the district with bond dollars, allowing us to put in place our newest security measures.”

It’s an ongoing process, Bouchard agrees. “Is there more we can and should be doing? Absolutely. That’s why we’re constantly adding new programs, new training, and new initiatives. Because the world, quite frankly, keeps changing.”