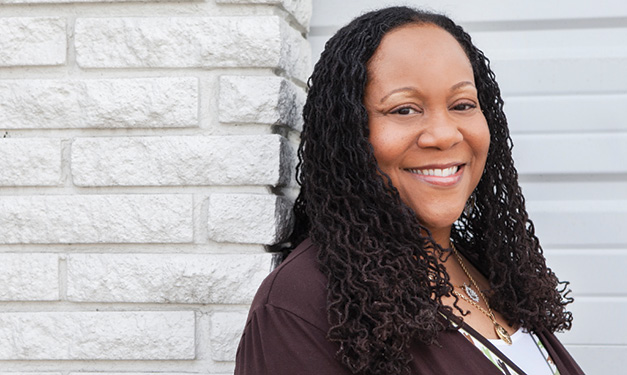 In many families, when you’re the youngest sibling, you’re often the most looked-after. But for Mona Lisa Kelly, the guidance counselor at Burton International Academy, being the youngest of four didn’t mean she was babied.

“My siblings were all stair steps (born one after another), and 26 years later I was born,” she says. “I knew one of the reasons I was born was to take care of my parents.”

That’s exactly what Kelly did.

“I was a caregiver from before the time my son was born until my mom died. I took care of my mom and my dad – alone,” she says.

She accomplished this while balancing motherhood and her career as a guidance counselor, which has consisted of jobs at various colleges and schools – and now at the elementary level at Burton International Academy in Detroit, where she has been working for two years.

In the years leading up to her time at Burton, Kelly, age 50, endured loss and suffered illnesses but continued on her career path. And today, Kelly, who has an 18-year-old son, Mario McGhee Jr., spends her days counseling students, organizing announcements for kids and parents, and coordinating bi-weekly visits with Wayne State University faculty and students as part of a partnership between the school and the university.

“I thought I wanted to be a model when I grew up, so I went to Wendy Ward (Charm School) and I went to Barbizon (Modeling and Acting Centers),” she says. But her mom wasn’t keen on makeup and Kelly was too short to model, so her interests turned to television, where she considered being an on-air reporter.

Then, she was inspired to become a counselor – thanks to Father Robert Moran, one of the founders of now-closed St. Martin de Porres High School where she attended school.

“He’s the catalyst for me being a counselor,” she says. “I could go talk to him about anything.”

Kelly was lucky to have that kind of support, she says – both from Father Moran and her family.

“If I was falling and there wasn’t a net, my mother would crochet one before I hit the ground.”

For many students that may not have that kind of support, Kelly knew she could take on that role.

She volunteered with Twelve Together program, a metro Detroit peer counseling group, was offered a job and then went to Eastern Michigan University for her master’s in counseling.

“I bounced around a lot,” she says of her job. She started out at the college level, working at Wayne State, Detroit College of Business (now Davenport), Lewis College of Business (which is now closed) and the University of Michigan. Kelly began working at the K-12 level as a teacher – she received a teaching certificate from U of D Mercy – and then transitioned into counseling.

During her career, within a few years, Kelly lost her two cousins, a niece, her brother and her father. Then, in 2000, her mother became ill and Kelly moved home to care for her. She died in 2006.

“When my mom died, physically I just fell apart,” she says.

Over the course of a few years, Kelly was diagnosed with breast cancer and contracted a bacterial infection and meningitis.

But she didn’t let her illness stop her from working with students.

In her first year at Burton International Academy, Kelly was the force behind the school’s collaboration with Wayne State University.

LaJoyce Brown, the interim senior director of undergraduate admissions and orientation for Wayne State University, reached out to Kelly.

“She called me up and she said, ‘Mona, I want to do a parent workshop at your school,’ and I said, ‘sure.”

When Brown visited the school, she told Kelly she wanted to be an active part of Burton, and the rest is history. The collaboration kicked off in June 2013 and operates thanks to funds from the university itself. “It just blossomed into something.”

The partnership between the school and the university supports the eighth grade students and gives them exposure to college life. Every other Thursday, people from Wayne State come in and talk to students. This includes professors, academic service officers and students, Kelly says.

The importance of counselors

Over the years, Kelly has cultivated relationships with countless students. She’s driven them to school, given them a place to stay if they needed it, and cheered them on when they didn’t believe in themselves.

“I talked about dream killers and how you have to combat the dream killers of the world – and that’s something that has to come from inside,” she says.

And when it comes to having counselors in schools, Kelly is passionate.

“One of the things that I really think is important is they really need to understand how relevant and important the professional school counselor is in an educational setting,” Kelly says.

Counselors, with the exception of gym teachers, are the only people who see all the school’s kids during each year of their time at the school – unlike teachers who will have a student during one year, but not the other.

Kelly gets the chance to be a support system for students – and has knowledge of their history, both personal and academic. For Kelly, though, it’s so much more.

“For me, I think there’s a spiritual connection with some kids,” she says. “We just connect, and I’ve always been able to connect.”