National School Bus Safety Week: What You Need to Know 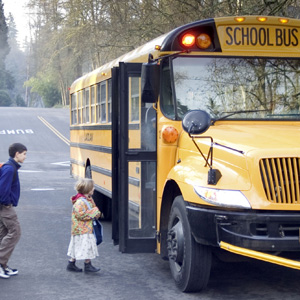 Iconic yellow school buses and their drivers are the reason many children arrive on time – and safely – to school. After all, an estimated 26 million kids in the United States travel by school bus – and that’s twice a day, according to the National School Transportation Association.

But a big part of keeping kids safe during their commute to school falls on other drivers to be paying attention on the roads. And, unfortunately, accidents do happen. Recently, on Oct. 16, a car collided with a school bus full of Dixon Educational Learning Academy students in Detroit, sending 10 students ages 10 to 12 to local hospitals to be checked for possible injuries, according to a Detroit Free Press article. The car’s driver “disregarded a yield sign,” the article notes.

In the midst of National Bus Safety Week, happening Oct. 21-25, 2013, it’s important to brush up on the facts about school buses – and what to do when you encounter one on your daily commute.

When it comes to getting kids and teens to school safely, school buses do it best. Students traveling via bus to school instead of with friends or driving themselves are “50 times more likely to arrive at school alive,” according to the American School Bus Council’s Safety First fact page. Even relying on mom and dad isn’t as safe as a school bus. The group notes those riding the bus are 20 times more likely to make it to class safely.

School buses are equipped with signals to let surrounding drivers know kids are loading and unloading the bus, including stop signs that swing out from the side and flashing lights. But for many, it’s been years since driver’s ed, and even experienced drivers forget the rules.

In driver’s training at A&A Driving School in Livonia, Canton, Plymouth and Shelby Township, instructor Allen Hagerman tells students, “When the red lights come on, they need to be no closer than 20 feet away from the bus.” And unless there’s a boulevard or a barrier in the road, both sides of the road need to stop, he notes.

Hagerman says before the red flashing lights come on, however, drivers will see yellow flashing lights on the bus. “That’s when (drivers) should start preparing,” he explains.

“You’d be surprised what people have assumed are the rules,” Hagerman tells Metro Parent. Oftentimes, people “Don’t know exactly, so they’ll err on the side that’s best for them” – which is often yielding and going around the bus.

Just remember: Don’t pass the bus. Hagerman says people are wrong to think that because they’ve stopped and looked, they can pass. “Yielding means giving up, which means you gave up the right of way,” he says.

And when you see flashing yellow lights? Don’t try to “race by the bus” so you don’t have to wait behind it, he says, noting kids who are running late will sometimes run out in the street to reach the bus.

While the traffic laws regarding buses vary by state, passing a stopped and flashing bus in Michigan will land drivers in a world of trouble. According to an MLive report, passing a stopped school bus is a civil infraction, costing violators up to $100 – plus a “civil fine of between $100 and $500.” It’s possible to be ordered to perform “up to 100 hours of community service at a school,” too, the article notes.