Ralph Bland Sets a New Standard for Education in Detroit 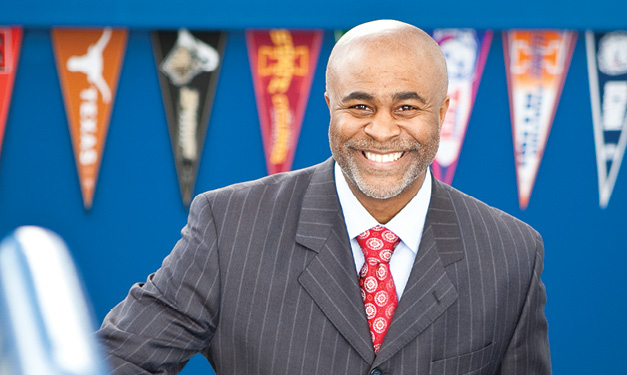 Long before Ralph Bland became the CEO of New Paradigm for Education, a charter management company in Detroit, he was a student at Kentucky State University who, while in the middle of student teaching, almost turned his back on a career in education.

"It was my time to take over the class (and) give some instruction, and I just said, 'I'm not interested in this,'" Bland says. "I don't think this is going to excite me."

However, instead of giving up, Bland, who was a football player, found a way to incorporate his love of the game into classroom curriculum to create engaging lesson plans and activities for his students.

And that did the trick. Bland was hooked on education.

Today, the Detroit native and dad – he and his wife have a son and daughter, ages 9 and 11 – is using his experience and enthusiasm to help change the landscape of education in Detroit.

Bland's road to his position as CEO of a charter management company started right here in Detroit, where he grew up before moving out of state for college. After graduating from Kentucky State in 1986, Bland returned to the city to do some substitute teaching.

He went from subbing to mentoring young men. And soon after, Ray Johnson, an education consultant in Detroit and then-principal of Paul Robeson Academy, approached him about an opportunity with the school, which was one of three schools that Detroit Public Schools was preparing to open.

Bland began subbing at the school, but was asked to teach first grade the following year. He wasn't sure he could, and told Johnson so.

"He said, 'Well, the parents trust you, your face, they see you every day – and we really need somebody that when the students go to first grade, that the parents are going to be OK with.'"

With a bit of coaching, Bland was ready to take on first grade – a job he took very seriously. He even worked at the school on weekends.

"That was my routine every Sunday, to go to the school – maybe early in the morning or after church – and stay two or three hours, work on my plans, draw graphs and different things around the room, practice my lessons and my chanting."

Bland poured his all into working with the kids and, over time, his leadership skills and responsibility grew.

Bland transitioned to community resource director at Detroit Edison Public School Academy in 1998 – where he stayed for two years.

To further expand his leadership roles, Bland relocated to Inkster schools to work as the principal in the district's middle school.

"I really put my heart and soul into that school," Bland says. "Inkster was a different situation – more challenges in the community and with the students."

In an effort to change the school culture, Bland began holding daily school assemblies to set the tone for the day. He stayed in Inkster for two years and finally decided to leave when he was presented an opportunity to return to DEPSA.

But before leaving Inkster, Bland held a student-only assembly to inform the kids of his decision to resign as principal.

"I wanted them to know that I wasn't walking out on them. It was just that important to me, and that no matter what somebody says after this moment, that that is not true – I did not walk out on you."

Students were so important to him, and while he had a difficult time leaving, returning to DEPSA set the stage for Bland to impact thousands of kids – and families.

Back at DEPSA, parents expressed a need for a high school. That desire became a reality when DEPSA was the first grantee awarded high school start-up funds by Michigan Future Inc.

The Early College of Excellence was the first Michigan Future high school, opening in 2010. This year will mark the first graduating class.

"One of the things in creating the high school is that it was real critical for us to continue to set these benchmarks of rigor and quality education," Bland says.

Part of this quality education included a partnership with Harvard. The school had an opportunity to send students to Harvard for eight-week courses and receive eight college credits.

"Those students returned from Harvard with all A's and B's in both of the courses," Bland says.

Then, the opportunity came along to take dual enrollment courses with University of Michigan-Dearborn.

"I was thinking, if we can really put the kids in an atmosphere where they're at a Tier One university, then we can really find out if they're college ready before they actually get to college," he says. "It will put us in a better situation – not just as a school, but for the city of Detroit."

So 15 students were sent to U-M-Dearborn to take math.

Thanks to these opportunities, when many of the students graduate this year, they will be going into college with anywhere from 15 to 29 credits from Harvard or the U-M-Dearborn.

It's a huge accomplishment for the students, the school and Bland, whose leadership has impacted the school's progress.

Bland says the future is bright for the four schools that New Paradigm for Education manages and the students who attend them. His goal is to continue to open more schools and "impact more families, so they can receive that level of quality education that they deserve."