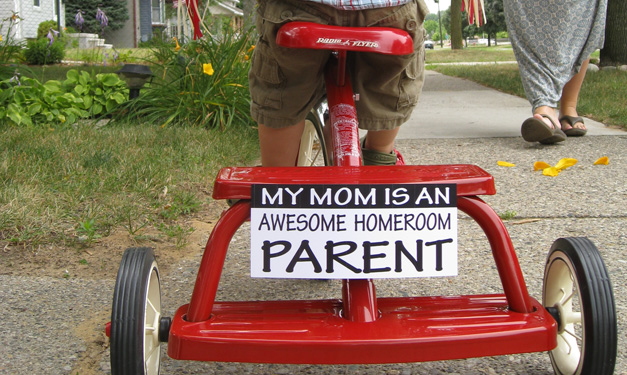 Room parent: Do the words strike fear into your heart? Relax. This former room mom has some tips to make room parenting a snap, not a trap – especially in these times when school budgets mean parent volunteers are critical to success.

Reach out to teacher

Your first priority is the teacher; he or she is in charge of the class and can tell you what works (and doesn’t) for the grade, as well as how you can help.

Second-grade teacher Anne Flanagan of Grosse Pointe Farms loves having room parents in her classroom. She usually picks two herself off the class list, at the start. Her calendar helps all parents know what events are coming, plus theme days or lessons that could use volunteers.

Eileen McKinney, a second-grade teacher in Birmingham, also turns to room parents to recruit more volunteers. Her first-grade room is bright and cheerful to welcome the Quarton Elementary students – with a place for everything.

McKinney’s got plenty for her room parent helpers to do. She’ll also meet them early, and then keep folders on hand so she’ll have the volunteers organized almost from day one.

Don’t be shy on finding another mom – or set of parents – to handle room-parent leadership. My own students’ high school classes usually had four or five duos serve as “class sponsors.” Busy elementary schools could easily use three. Some schools arrange teams through their PTA or PTO.

At some local schools, PTO volunteers work to recruit from each class for different holiday or event parties. Former PTO president Heather Averitt works with key volunteers who then recruit parents from each classroom tied to the event. They usually have a school-wide theme. For Halloween, for example, they combined books and pumpkins – at the same time as a school book fair. The PTO provided the pumpkins, and each class had frightfully creative pumpkins displayed from a favorite book.

All this planning leads room parents to say over and over again: Communicate with each other, with the teacher, the parents and the kids. As Averitt puts it, “Email is a savior.” Twitter has also been filling a void for real-time updates.

Barbie Barker, a room parent veteran, also loves having cell or other mobile phone numbers for a few flexible and key volunteers at Eileen McKinney’s second-grade class. If someone cancels at the last minute, she has her mobile crew ready to move into action.

I love Martha Stewart. But I’ve learned her crafts are not necessarily the ones you can use in every room party. The most fun comes with some of the simplest – yet still creative – crafts that everyone can master.

Teachers again can usually key you in on what their class can handle. It can differ year to year. Bridget Murray and Monique Turko, both moms of three, have teamed up for Anne Flanagan’s class. They recall one year when they thought making gingerbread houses would be a holiday hit. They outdid themselves. And? “It was a disaster,” laughs Murray.

A much more successful project later involved making snow people – using some topiaries the team found a dollar store, and some white craft paint. “Never do anything (in class) involving a glue gun,” they warn.

A room parent team can help shepherd the resources in talent and time of all the class parents. Flanagan loves helpers at some of her special lesson days – like when the insect unit has some special stations.

There’s often a chance to be a guest reader – and who can’t read aloud? Also, parents can share their hobbies, trips or job information on different themes. And if there’s a chance to provide resources, whether simple supplies or baked goods, it helps the schools.

Still shy? Plunge in first as an “apprentice,” volunteering and working with a veteran room parent. You’ll be ready to move up and on next year.

Once you’ve started, you’ll be back for more. Until it’s time for the next step: middle school, where you’ll find there are no room parents. But don’t worry. Dances, activity nights, school band, sports teams and more are awaiting your help!