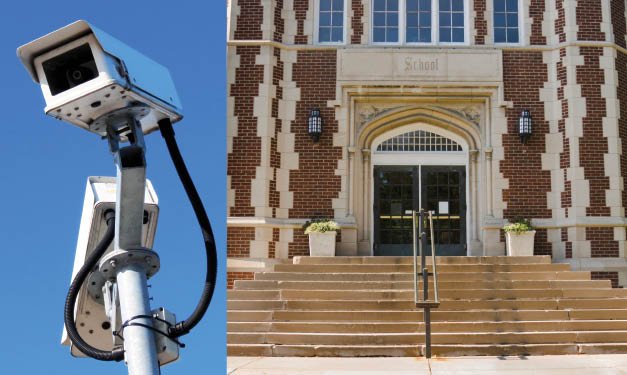 A gunman armed with military-grade firearms made his way into Sandy Hook Elementary School in Newtown, Conn. this past December, killing 26 people – including 20 first-graders, all just 6 or 7 years old.

It’s an event that parents and school officials across the country, and here in southeast Michigan, reacted to immediately.

“We knew, of course, that all parents are going, ‘Oh, my God, my kid’s in a school,'” says Kay Neff, head of school at Dearborn Heights Montessori Center and two other area Montessori schools. By the afternoon of Dec. 14, parents were already contacting her, asking “good questions” about the school’s security, Neff says.

She sent the parents of her preschool-age through eighth-grade students emails about the security measures they currently had in place to protect the students, and assured parents they’d evaluate the procedures, too.

“I responded really quickly,” she says, making sure parents were informed and the children felt secure.

A different type of attack

Mass shootings have increased over the past decade. According to data compiled by Mother Jones and widely reported in the wake of the Newtown tragedy, there have been 25 mass shootings in the United States since 2006. Just this past year, in 2012, there were seven – including Newtown and the Aurora, Colo. movie theater massacre that occurred earlier in the summer.

Unlike the notorious Columbine High School or Virginia Tech shootings, the Newtown shooting was the result of an outsider, someone not a part of that school, coming in to cause harm.

It was not a school shooting in the way we’ve always known them, since the perpetrator was not a member of that school. The Newtown tragedy was a mass shooting where the target wasn’t a hospital, a movie theater or a mall, but an elementary school. Of course, there is no acceptable place for a mass shooting, but this place – one filled with young, vulnerable and trusting children – was perhaps the worst target we could imagine.

With a peck on the cheek and a shout of “love you,” parents cavalierly send their kids off to school each day with the expectation that they’ll be protected and arrive home safely. And so it’s natural that this tragedy in Newtown would challenge that assumption, bringing questions of school security and safety to the top of their minds and the agendas of local educators.

“Our awareness has been very heightened by this event, and we are seriously looking at all the options,” Neff says of her Wayne County schools.

“I think school security will receive more attention,” she adds, “be taken even more seriously than it already is, and become tighter in general as a result of the Connecticut event.”

As Neff answered emails from parents such as, “Why don’t you have your front doors locked all the time?” on the afternoon of the Sandy Hook shooting, she decided to be proactive.

“I (tried) to think it through, with the whole picture in mind,” she says, adding that in a school, “there’s no decision you make that doesn’t affect someone else.”

Neff assured parents immediately that the school would evaluate its security. At Dearborn Heights Montessori, a large school housed in an old public elementary school building, staff now locks three of the four main doors leading to the lobby, where a monitor watches the doors at all times.

“You’re walking in past somebody sitting at the front desk,” she says.

In the smaller schools she runs, they’re discussing the installation of key fob systems, which would allow only parents with a special key to get into the doors. At Dearborn Heights Montessori Center, they’re considering installing a buzz-in system.

On top of the existing emergency plans and security measures, Neff has done “different things at different sites,” she says, because each building has a different layout.

“There are recommendations,” but it also “depends on individual circumstances,” Bouchard explains, noting that emergency plans have to be “tailored” to each place. Security plans depend on everything from the age and physical capability of the children to the location of the classroom.

“What we try to do is give a variety of suggestions,” he says. “It’s not a one size fits all.”

Bouchard says that following the Connecticut shooting, “A lot of people called and said they wanted to learn more about what they could do in their own school buildings and in their own situations” – and he says that’s the right move.

“Anytime things change,” he says, “everyone should reexamine their situation vis-a-vis what just transpired.”

Bouchard’s office, along with the Oakland County Homeland Security Division, is working in county schools to train teachers and staff on how to respond if an active shooter enters the building. Bouchard also gives presentations to schools on reacting in these situations and what to do when law enforcement arrives.

“We are always looking for ways to pass on info about safety issues to the schools and to the community in general,” he says, adding that before the Connecticut shooting, the Oakland County Sheriff’s Office had a video and active-shooter pamphlet on its website.

“We had a lot of things in place already. For us, it didn’t mean big changes,” she says, adding that CVS has numerous security cameras monitoring the schools. “What we’re continuing now is talking about a way we could improve school security.”

Detroit Public Schools also let the parents of their students know what security measures they had in place. Jennifer Mrozowski, executive director of DPS communications, says the schools’ police department has worked with all 100 schools in the district to “review and refine their individual safety plans.”

Aside from assessing the physical security of the school, some schools also are concerned about the students’ sense of safety while at school. CVS and Dearborn Heights Montessori sent out emails to parents on how to deal with the tragedy at home, and DPS offered counseling services after the shooting.

“(We’re) worrying a lot about how the parents and the children are feeling. Their sense of personal security is really what’s important,” Neff says of her schools.

Sue Fitzpatrick, parent educator and community outreach coordinator at Dearborn Heights Montessori Center, teaches a “peace curriculum.” She says the “internal structures” – aside from the “external structures” – are extremely important when it comes to school security.

“(Students) need to know that there are outlets for them,” she says, so that they feel comfortable talking about their feelings.

Neff says that securing the school from intruders is “one thing,” but making sure students aren’t afraid of the people in their everyday environment is “more a part of a child’s day every day,” she notes.

“You go into a ‘fight-or-flight’ mode,” she says of being scared, “where learning, taking in new info, thinking, those functions are obliterated … by adrenaline.”

“In the aftermath of this tragedy, children of all ages need reassurance that their school is safe,” the email read. Ideas included saying, “Your school is safe. You don’t need to worry,” and, “Your safety is important to everyone in your school.”

By seeing even small changes like a newly installed buzz-in system in a school, Neff says parents understand that schools are “seriously paying attention to who enters our building” – and in turn they feel their kids are safer.

“It’s made us all think and reevaluate and make changes. There’s no doubt about that,” Neff says. “It’s a wake-up call.”

Yet Sandy Hook Elementary had locked doors and security, too, all of which were “not able to keep out somebody with military-style gun(s),” Neff says.
“You’re never going to be able to stop the maniac,” she says, explaining you can’t do anything other than keeping your kid home to fully protect them. “I think parents are realistic about that.”

But, Neff adds, the Connecticut shooting “is such a huge exception to the rule of what really happens in school.

“Gunmen coming into schools make national news for a reason,” she says. “It’s so different, it’s so terrible – but it’s also rare.”

Ultimately, schools are taking the time to make sure their students are safe and looking at “ways to do a good job even better,” Blain of CVS says.

“We know if there’s somebody who is very determined to cause that kind of harm, they will find a way to do it,” she says, referencing Sandy Hook. Nonetheless, “We need to do everything we can to help prevent it.”