Schools Are Serving Healthier Lunches – Are Kids Eating Them?

More than five years ago, the USDA revamped the standards for school lunch. Find out how schools are serving healthier lunches and getting kids to eat them. 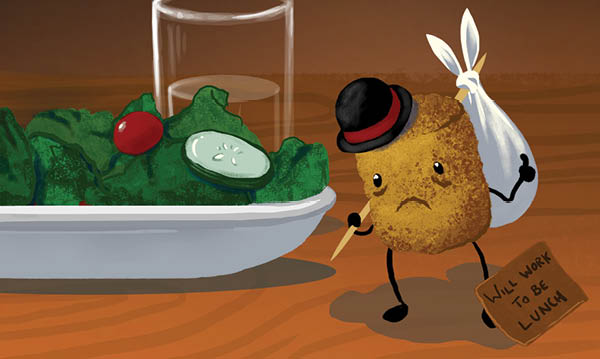 The fourth-period bell rings at 10:29 a.m. and, six minutes later, roughly 300 students have made their way through the cafeteria lines for the first of three lunch periods at Warren Mott High School. Staples like pizza and hamburgers don’t sit for very long under the warming lights. Neither do sandwiches and cheese-stuffed Bosco Sticks.

While school cafeterias may look (and smell) the same as they have for years, unlike the school lunches of the past, districts are forced to comply with federal rules that heavily legislate what can and cannot be served to America’s kids.

The Healthy Hunger-Free Kids Act of 2010 mandates that snacks and meals sold at schools contain less calories, sodium, sugar and fat. It requires the exclusive use of whole-grain products and it stipulates that each student receive a fruit or vegetable with his or her meal.

As students at Grayson Elementary School in Waterford pass through the lunch line, they are presented with a variety of fruits and vegetables. Each student dutifully selects a black container filled with freshly cut fruits or veggies. The black containers are strategically placed on red trays because, according to Janet Timmreck, a food service trainer with the Waterford School District, “we eat with our eyes, and the black and red contrast is visually pleasing.”

This particular day, students can choose from containers of the following: green peppers, snap peas, broccoli, red peppers, watermelon, kiwi and grapes, as well as tomatoes and cucumbers.

During the first of three lunch periods, one student approaches Timmreck to thank her for having kiwi. “I love kiwi,” the fourth grader tells her.

As the students quickly take their seats, the lunch room buzzes with energy. The kids are eager to socialize during their 20-minute lunch period and often choose chatting over chowing. When the period comes to an end, most of the fruits and vegetables end up in the garbage. But so does a good portion of the rest of their lunches. Desserts appear to be the exception. If the baby carrots or apple slices end up in the garbage, who is really going to know?

Who moved my cheesesticks?

While it’s hard to argue with legislation that focuses on improving child nutrition, the school nutrition folks continue to struggle with finding affordable ways to meet stringent requirements and serve food students will eat.

Implementing healthy changes is costly and, to make up for the shortfall, some school districts say they’ve had to cut staff, limit food choices and take money from the general fund to help support the school lunch program.

“So often, I see students having to take a required fruit or vegetable only to see it tossed in the trash,” says Carl Merkle, director of nutrition service in Warren Consolidated Schools. “I believe that we need to teach students to make better choices when eating – and especially when eating out of the house. I do not know of too many restaurants where all of the menu offerings meet stringent nutritional requirements, and if there are some, I am pretty sure that most of our families do not dine there.”

While Merkle supports the spirit of the initiative, like other school food-service professionals, he believes regulations are too much too soon. Schools went from no new reforms in over 30 years to various strict guidelines.

“It’s not good nutrition if the kids don’t eat it,” says Doreen Simonds, the food service director for the Waterford School District.

The U.S. Senate’s agriculture committee is currently working on a bill to reauthorize child nutrition programs, a process that takes place every five years. The School Nutrition Association is asking Congress is to have some flexibility with school meals, particularly the whole-grain requirements and sodium restrictions, as a way to get more kids back in the lunch lines.

According to Lori Adkins, a child nutrition consultant with Oakland Schools, sodium reductions were made in 2012 and further reductions are slated for future implementation. “Student acceptability of low-sodium foods and 100-percent whole grains have impacted student acceptance and participation in the program,” she says.

Merkle in Warren agrees. “Students are not accustomed to the rapid nature of these changes and are voting with their pocketbook.” But Merkle acknowledges that as students get used to the changes and districts find creative ways to meet the requirements, kids are slowly returning.

Mott junior Andre Chandler says he likes the healthier food because maintaining a proper diet is important to him as a football player. Similarly, classmate Diana Buttrus doesn’t mind the school lunches. “There is some food that doesn’t taste as good, but with so many choices, you can always find something,” she says.

Still, since the guidelines took effect, school lunch participation across the nation dropped by 1.4 million school lunches each day, according to the U.S. Department of Agriculture.

Despite challenges, districts are finding creative ways to serve up healthier meals that appeal. Taste testing, school gardens and farm visits are just a few of the many initiatives schools are implementing.

A number of area schools introduced smoothie bars, which are an increasingly popular way to boost fruit and vegetable intake (although students don’t always know they’re drinking their vegetables). Many schools partner with local pizza franchises, like Jet’s, to sell pizza customized with lower-fat cheese and whole-grain crust to meet the requirements.

At Bloomfield Hills High School, the most anticipated meal is the stir-fry bar. Once a week, students willingly wait in long lines for a customized stir-fry of either beef, chicken or tofu, vegetables and sauce. For $4.25, the most expensive lunch offered in the district, students also get milk, brown rice and fruit.

Bloomfield Hills is a big proponent of offering a variety of food bars because when students can customize their meals, it increases participation, says Sosnowski. The high school offers a deli bar, which Sosnowski likens to Subway because students can pick from a variety of whole-grain breads, low-fat meats, cheeses and a number of fresh vegetables.

At the districts’ elementary schools, fresh fruit and vegetable bars are popular. Now, instead of being handed a piece of fruit, students can select what they want and, because they have a choice, they are more apt to eat it, says Sosnowski, who is an employee of Aramark, the company hired to handle food services here. Privatizing is one method districts use to save money and keep up with regulations.

Schools also took a financial hit last year when the Smart Snacks in School nutrition standards went into effect, requiring all food sold during the school day meet the mark. It applies to foods sold a la carte in the cafeteria, in the school store and in vending machines. It excludes after-school fundraisers, like bake sales, and frozen pizza and cookie dough sales.

When Waterford’s Simonds first heard of the farm-to-school concept, she was leery because the growing season in Michigan is short and seemed to barely coincide with the school year. But, as she learned more about farming and the benefits, she became an advocate.

“There are ways for Michigan farmers to extend their growing season,” says Simonds. “When properly grown and kept, produce actually has a long lifespan. For example, we still get Michigan apples in January.”

One of the ways farmers extend their growing period is through the use of a hoop house, a special greenhouse constructed to economically keep temperatures higher in cold climates. Some of the produce that makes its way to the trays of Waterford students is grown in a hoop house. The district is partnered with a Holly, Michigan farmer who received a grant to build them. To pay off that grant, the farmer must give the district with a portion of his produce. Even into the winter months, he provides schools crops such as lettuce and tomatoes.

More schools are also growing their own vegetables in school gardens. Not only do the students learn about agricultural practices and proper nutrition, but “When kids are involved and know where their food is coming from, it encourages them to eat it,” says Simonds.

Two elementary schools in Waterford now have gardens and, with a grant from the USDA, both middle schools are building greenhouses, which will be complete by next fall. Districts like Ann Arbor currently have 14 school gardens with more expected.

Detroit Public Schools boasts a whopping 78 gardens, including four acres of farmland and seven hoop houses at the Drew Transition Center, a post-secondary vocational center for special education students ages 18-26. Thousands of pounds of produce are grown and served in DPS cafeterias.

Meanwhile, while schools wait to see what changes Congress will decide to make, if any, school lunch staff say they’ll continue to find ways to balance the budget, the rules – and what students will actually eat.

“We’re definitely not the same food service we used to be,” says Sosnowski. “It’s not pizza on a plate and call it a day. It’s much more involved than that and, overall, I think that schools are doing the best they can.”