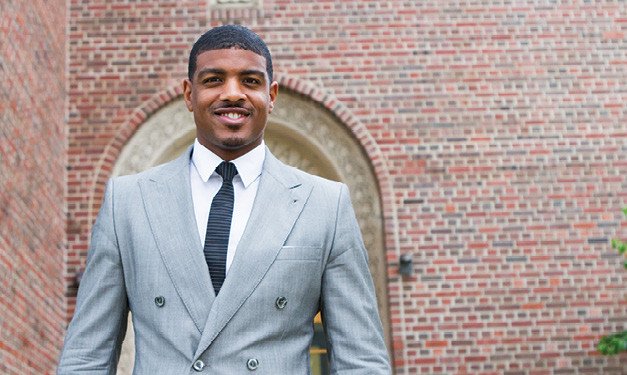 Shawn Blanchard was a kid who had the deck stacked against him. He was born with drugs in his system, to a mother and father who couldn't or wouldn't care for him. In the absence of any other heroes, he looked up to his two older brothers. One, he says, was seduced by the lure of the streets and became a drug dealer who is now serving time in federal prison. The other was killed in a drug-related shooting. He himself wanted nothing more than to be a kingpin and a rapper, surrounded by material goods, girls and flash.

But instead of becoming that person, he chose a different path, one that led to him making a positive impact on his community rather than a negative one. He worked hard, graduated from the University of Michigan, earned a master's in education and ran a math department at a school in the Bronx that was recognized for being among the top 5 percent of schools in the country that were succeeding in closing the achievement gap with poor and minority students.

He came back to Detroit, attended Wayne State University Law School, founded a mentoring program and also launched Run This Town and Networking Out, two fitness-focused groups that create connections and networking opportunities in the city.

He says he isn't sure what got him on the right path, other than his grandmother, whom he calls his "rock in life." One thing that helped, he says, is that his grandmother and his teachers always commented on how intelligent he was, which made him want to emphasize that quality. And he understood over time that the negativity created by the people he did look up to was not something he wanted to emulate.

"All kids look up to somebody," he says. "They can extract the wrong things from the people they look up to. I had really good bad examples, and having that, I realized I may not know what to do, but I know what I don't want to do."

Mayor Mike Duggan recently named Blanchard Director of Youth Services for the City of Detroit. In this position, he provides resources and assistance to programs aimed at youth in the city. His two main tasks currently are developing more after-school recreation opportunities for high school students and creating 5,000 summer jobs for teens for next summer. As such, he is looking at best practices around the country and evaluating what might work in Detroit.

"It's really exciting to get an opportunity to check out what other people are doing around the country, and coming up with a solution for Detroit to be able to do this Detroit's way," he says.

He caught the eye of the mayor through Run This Town/Networking Out, a group he and two friends formed to convene people who are interested in fitness and provide them a way to network with other young professionals with common interests. Duggan was interested in his background in education and mentoring as well; Blanchard has formed a mentoring company and also raised his younger brother and acted as legal guardian for another young man.

He really began blossoming into a mentor role when he taught in New York, Blanchard says. The young people he taught have a similar background, with similar struggles. Because he understood them and had been where they were, he was able to connect with them and help them achieve.

"It's interesting and eye-opening, seeing children growing up the same way you did, from the other side of the desk," he says. One of the keys to success in that environment, he says, was to create a community and a culture at the school so students who came to school hungry, tired or stressed about things at home could find a safe, supportive space focused on nurturing not just their academic selves – but their spirits as well, Blanchard says.

"These kids come with such baggage before they even get to the subject matter they are learning, so we created a structure and community to allow them to invest in education and in themselves," he says.

He returned to Detroit, he says, because he was getting a lot of accolades and attention for his success in New York and wanted to bring the same energy and attention to bear on his hometown.

Blanchard is still teaching, mostly recently at the Summer Bridge Program at the University of Michigan. Like much of his work, it meant a lot to him because he shares similar experiences with students in the program. He also was in the program when he went to U of M and understands how a little extra time to adjust to the demands of college work can make the difference between success and failure for students from less-privileged backgrounds than the typical U-M student.

"They are coming from schools where they may have been some of the high-functioning students in their schools, but maybe their school wasn't the best, or maybe they need to prove that a little bit more here," he says. "Michigan feels the need to make sure they are achieving in the fall, so they get an extra push before they get there."

All of the things he's been involved in personally and professionally speak to his dream for children in the city of Detroit and beyond – that they are able to be exposed to many possibilities for their future and have the resources and help necessary to get there. There is more to life – and much more opportunity available – beyond the typical careers of doctor, lawyer, basketball player or musician that so many kids are told they should aspire to. Showing them paths to a successful life that are more attainable for the average person can be a powerful motivator to keeping kids on a positive path, he says.

"For example, careers in music – what about being the person creating the microphone, or the sound engineer, or person doing the stage lighting? There are so many different careers doing music," he says. "I want them to be exposed to careers and the people that are making these things happen, so that it's tangible to them, and couple that with the resources to get them there."