Writing is a great way to keep children thinking, learning and exploring over vacation. Here's how parents can sneak it in - without it becoming 'homework!' 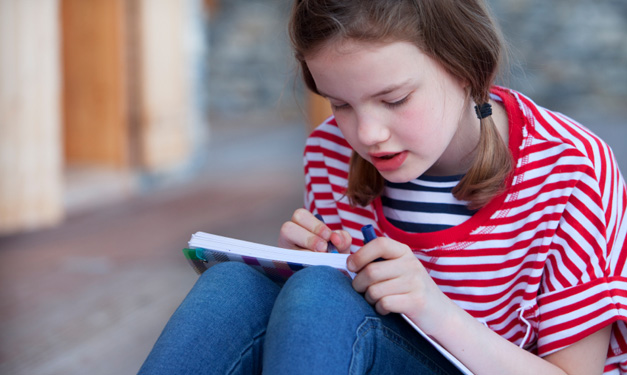 Keep your child’s writing skills up this summer by encouraging her to journal. Shhhhh, here’s the real secret to making the experience a success: Whatever you do, don’t call it a journal, explains Diana Olds, a fourth grade teacher at Hoben Elementary School in the Plymouth-Canton Community Schools. “You don’t want it to seem like a chore,” she says.

She goes on to say that any kind of writing can be a journal; it’s just a matter of getting kids to record their experiences on paper. Children don’t have to keep a traditional journal. In fact, for some, that could just hamper the process.

Looking for additional tips to help your child embrace her inner writer over summer vacation? Here are a few clever tricks and ideas for southeast Michigan moms and dads to try.

Take some of your child’s favorite stories and have her rewrite them. For example, with Olds’ 5-year-old daughter, Avery, they wrote their own version of a book that listed all the things the character did and didn’t like. Avery still loves to read the story over and over again.

Ask your child to write a letter to a relative, like grandma, talking about something fun she did that day. Grandma will love getting the letter – and your child will have a reason to write (and reflect a bit, too).

Make silly poems. Writing doesn’t always have to be in complete sentences! Let your child make a fun poem to record what she did that day – on vacation, at the pool, at a friend’s house or just bumming around. And remember, poems don’t have to rhyme, either. Encourage them to try a little freestyle – or maybe even take a stab at a simple haiku.

Download story-building apps. Olds recommends Toontastic, Storyrobe, Book Creator and Storyboards. “My 5 year old daughter loves Toontastic,” says Olds. “You can move characters around and even move their arms. She’s created several stories by recording her voice over the scenes that she’s created. This app walks them through the process, then puts it together in a sort of digital book. How fun is that?”

Keep a parent-child journal. Write a question to your child and place it with a pen under her pillow – kind of like your own version of the Tooth Fairy, only with writing. Let your child know she should write an answer – and then ask you a question and put it under your pillow.

Collect items from a vacation and have your child write about what they mean to her. Olds notes that your child can write on whatever is available, from napkins to postcards, and you can glue them into a scrapbook together.

Have your child write some fan fiction. Is your daughter a Dora the Explorer fan? Or maybe she moved on to Victorious? Ask her to write up an episode that she’d like to see. Or maybe she can write herself into the series.

Keep notebooks and colored pencils handy. Olds has a basket of writing supplies from the Dollar Store in her car. You might want to put a few in your purse so that your child always has pen and paper ready to record all of her summertime adventures!