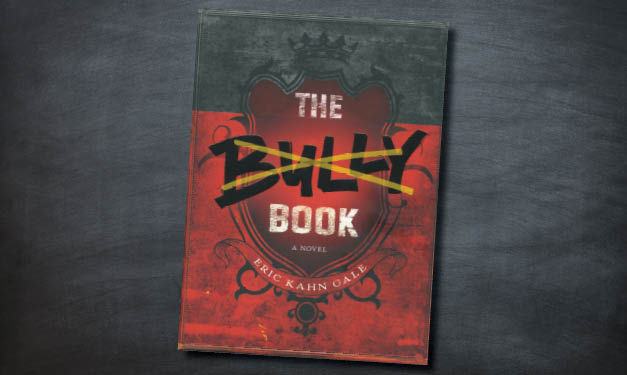 Mystery and a dash of comedy are a powerful way to tackle a painful, real-life topic. That’s the case with The Bully Book by Michigan native Eric Kahn Gale, who’s a graduate of the University of Michigan in Ann Arbor.

Designed to capture ages 8-12, Gale’s debut novel melds his own experience with fiction to take tweens on a boy’s journey in the social jungle that is middle school – and being a victim of bullying.

Basis of the book

When hero Eric Haskins enters sixth grade, he has no reason to believe it’ll be different than any other year. When his best friend refuses to sit next to him, though, his world suddenly turns upside down. Eric follows his friend home from school to find out why, and that’s when he finds out about The Bully Book.

Yet that’s all his former friend is willing to reveal. The rest is up to Eric to discover on his own. Why was Eric chosen as the “Grunt”? What did he do to deserve this treatment? More importantly, what can he do to change it for himself, and those who come after him? Eric’s on a mission to figure it out, and learns a few things along the way.

Gale, who’s made waves with theater troupe StarKid Productions in Chicago, has firsthand knowledge of bullying and weaves it into his tale, with fictional enhancements, to create his story.

“When he was 11 years old, he felt like the whole class was conspiring against him,” the book’s author bio says. “Everyone used the same insults and nicknames, and there didn’t seem to be a safe corner of the room or moment in the day.”

Looking back, the grownup Gale now has a bit more perspective – and, because of his own experiences in school, wants readers to understand that “no one should ever define you.”

Published by HarperCollins Children’s Books and available in both e-book and hardcover form (about $16.99 retail), the book hit No. 1 on the Children’s Mystery list and No. 7 on the Children’s Book list. It’s scored a great review from Publishers Weekly, which calls it “gripping” – as well as many readers, who say the protagonist is relatable and story line spot-on.

To learn more about the book and author, visit Eric Kahn Gale’s The Bully Book website.