Fun Facts About the School Bus

'The wheels on the bus go round and round!' Here are 20 fun facts about this school staple, just in time for back-to-school. 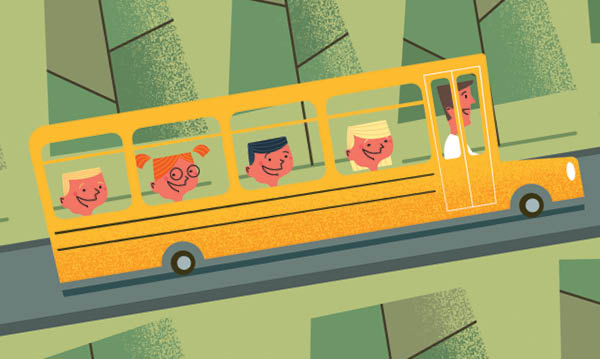 We all know the lyrics to this popular children’s song – sorry if it gets stuck in your head for the rest of the day – but here are 20 things you probably don’t know about those big yellow buses that drive our kids to and from school five days a week, 10 months a year.

4,600
If a student rides the bus to and from school every day from kindergarten through 12th grade, he or she will log approximately 4,600 bus rides (assuming that child doesn’t miss too much school).

484,041
In the United States, there are 484,041 school buses transporting more than 27 million school children each day.

‘National School Bus Glossy Yellow’
It is the official name for the color of school buses. However, there are no federal regulations requiring a school bus be painted yellow. The National Highway Transportation Safety Administration recommends the color because the “uniformity of school bus appearance helps motorists identify the vehicles as school buses.”

1939
The idea of a yellow school bus was first introduced in 1939 by a Columbia University professor who felt that it was the safest color because it was easiest to see, especially on a dark morning.

Seat belts
School buses typically do not include seat belts because they have closely spaced, impact-absorbing, high-back padded seats, which can keep passengers safe in the event of a crash.

The law
Under Michigan law, school districts do not have to bus students. The only exception is for a special education student with an IEP (Individualized Education Program) that specifically requires busing.

2010
Royal Oak is the only school district in Oakland County that does not have buses for any of its general education students. The service was eliminated in 2010 as a cost-saving measure. Harper Woods, in Wayne County, also does not bus for financial reasons.

55-60
If you think your vehicle gets poor gas mileage, consider this: A school bus typically gets seven miles per gallon and holds between 55 and 60 gallons of fuel.

Maximum distance
In Michigan there are no laws specifying the maximum distance a student may have to walk to his or her bus stop. Nor are there laws for how long a child can be on the bus. However, school districts can set their own parameters.

Kindergarten
Some parents mistakenly believe that a kindergarten student must be picked up at his or her house. There are no requirements that drivers pick up these young students at their residences.

8x
Students are nearly eight times safer in a school bus than they are in their parents’ cars, according to the National Highway Traffic Safety Administration.

Stop
Here’s a refresher: When the lights at the top of the bus are flashing red, drivers must stop. Sometimes the lights are paired by an extended stop sign, aka a stop arm.

Flashing yellow
Buses picking up or dropping off students on a main road turn on flashing yellow lights if the bus isn’t blocking traffic and the student doesn’t have to cross a street. You aren’t required to stop.

74,421
School bus drivers join in a survey to report the number of times motorists illegally pass their stopped buses in one day. This year, more than 96,000 in 33 states answered. They reported 74,421 cases, the National Association of State Directors of Public Transportation Services notes.

Fun bus
Tumblebus converts buses into mobile gyms with beams, rings, monkey bars, trampolines and a zip line. Find one over in Canton.

Do mom and dad need a weekend away without traveling too far? Consider one of these romantic getaways for parents in Michigan.
Read more
School Issues