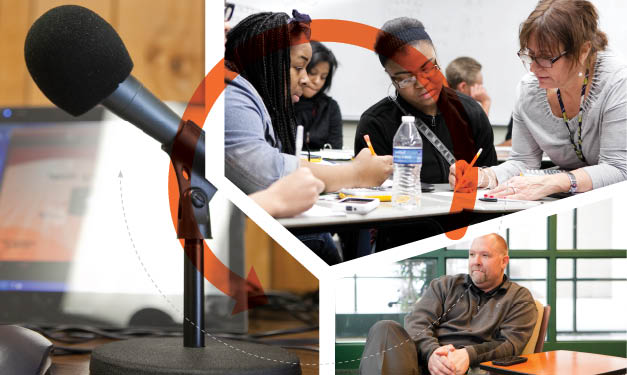 But what happens when that supposedly tried-and-true template simply stops working?

In 2010, Clinton Township's Clintondale High School was in bad shape. With about 35 percent of its students failing at least one or more classes, Principal Greg Green could see the school needed a new practice – something that would turn things around. His idea? Have the school somersault into a completely new structure. Turn the traditional school model on its head.

The concept is called the "flipped" model. Instead of following the standard procedure, students at Clintondale watch videos and listen to lectures from teachers at home on their computers, iPads and phones. When they come to school, what would normally be class time is now dedicated to doing homework with the teachers there to help.

"It really wasn't a big risk, because we had to step forward and take responsibility of our situation," Green says of flipping his school.

But it was revolutionary. Clintondale is the first school in the country to completely flip its entire school – and the acrobatics proved successful. Failure rates are down, graduation rates are up and the school's climate has been more positive overall, Green says.

Plus, it dissolved barriers Green says many students faced, from parents not being able to assist with homework to students not having the proper tools to do the homework. To educate, teachers are using the technology that inundates the lives of teenagers already. The information is accessible 24/7 at the kids' fingertips on their favorite devices. In a world infused with new and always-developing tools, is it farfetched to look at the flipped model and wonder: Will this be the future of education?

"The structure's broken. The alignment's broken. That's what's broken in education. It's not parents who don't care; it's not teachers who don't want to work hard," Green says. "Now, I think we've found the right alignment."

As a baseball coach for his son's team, Green made videos. He was introduced to Camtasia Relay, a program used to record and share videos, and he recorded instructional clips for the team.

"I showed them to the kids and then, when they came to the practice, they tended to be more on target and I didn't have to go over 100 things and we could get further along," Green recalls. Then, it came to him. "I said, 'Wouldn't this be great in math or science?'"

Looking at his struggling school, he saw how his idea could benefit the students in other ways.

"I can eliminate all the things that frustrate us from the home factors, as far as parents not being able to help them because it's a process they haven't gone through," he says of the flip. He reasoned to his teachers that helping students with homework in the classroom, where they can go into more detail and spend the time working with the students, was a better use of their time.

"We know as soon as (students) leave, we have no control over the environment or what they do," Green says, noting that schools are full of experts and resources.

During the second semester of the 2010 school year, Green put the plan into action with his freshman class. In just one semester, failure rates among the ninth graders dropped by 33 percent in English, 31 percent in math, 22 percent in science and 19 percent in social studies, according to the school. With these results, Green felt confident about flipping the model for the entire school in 2011. It resulted in a more than 20-percent reduction in failures, he says.

"In some cases, people might say it's remarkable," Green adds. Even the graduation rates and college acceptance rates have gone up, he notes.

"The culture climate in my building has significantly changed. From teachers working with kids and building relationships. I mean, when you find that, your school runs a lot smoother," Green says.

The philosophy behind the flipped model is "really quite simple," Mike Ward, U.S. history and economics teacher at Clintondale High School, says.

"It gives kids tasks that they can complete at home and, on the order of things, it's probably the more entry-level in terms of requiring knowledge," he explains. "So, when they come to class, they have some prerequisite information to do the higher-order things with me, the coach, there to bring them through the more difficult tasks."

Ward, who has been at the school for 16 years and is a self-proclaimed technology hobbyist, says the flipped model has made him a more efficient teacher. Teachers are able to record videos using Camtasia technology, share PowerPoints or articles with students. Even the textbooks are online.

"I can deliver content outside of a 50-minute period, and now they have more time to work on the more complex things," Ward says. He also uses email and an app called Remind101 to assist his students and text them reminders for class straight to their cellphones. "We've extended the learning experience outside of our brick-and-mortar walls."

Not only does the technology "amplify the effect of one person," but Ward also values the ability to get to know his students and their needs. "We're sitting down, we're establishing proximity and we're building relationships – rather than assigning work."

Because of this bond, Green says the school has an easier time identifying underlying issues with students, too.

Tenth-grade student Arion Johnson, who has attended Clintondale Community Schools since sixth grade, points out that if she's absent, there's a huge benefit to having videos readily available online.

"I can just go on the computer and just look up what the lesson was that day," she says. Even if she needs a refresher because she didn't hear what the teacher was explaining during class, the video is still online at home, she says, noting that if she needs to review, she has the ability to rewind, pause and replay a video – something that's impossible in a standard class setting.

"Sometimes the class will be better at home without all the kids being loud," she says, making it easier to concentrate on studies. Even quieter students benefit from the flipped practice, Green says, because they'll open up on Blackboard's online discussion boards.

While Ward says at first the technology posed a bit of an issue simply because some students didn't have access to computers at home, it's becoming less of an issue now. The school offers time in the computer labs at school to catch up, and students can go to the library as well. Ward says he makes sure his content is accessible through cellphones, something he says many students have today.

Parent Elizabeth McMillan, whose son Cane is a junior at the school and is also a parent liaison at Clintondale, says most parents have been positive about the practice, and those who question it at first &quot
;learn to really like it."

For McMillan, whose son is an honor student taking advanced math classes, it saves her a lot of stress. "I've never done those (subjects) in high school. I've never done it in college," she says. "So, if he came to me, I could never help him. And this way, he's able to do the work with somebody who is educated to help him. Otherwise, I was trying to 'relearn' something that I never learned."

Today, Clintondale gets a lot of media attention for its model, and Green says schools across the country have been telling him about the difficulties they have with kids not doing homework or coming in to class with it all wrong.

"This is common sense. Would the football coach go over the plays and talk about the plays and send the football team home and not practice in front of themselves? And people say, 'Well that's crazy.' They wouldn't even consider that. But if math and science and those core areas are so important," Green proposes, why would that be any different?

Green says some people have the misconception that school is now all about videos and technology, but it's not. "We use technology to make our classrooms more instructionally sound" and "give better support to our students."

The logic that he sees in this reverse model makes him a believer that others will follow in his path.

"I really feel strongly that most schools will do some sort of this in their place," Green says. "This isn't something new. When you look at the electives – Spanish, music, some of the vocational classes – they do that naturally. They do all their work there. Because why? Because they can't duplicate it at home.

"So this is just something that we're moving into – we're using technologies to move it into … core academic areas."

At first, when Green flipped his school, there were teachers who feared the technology would replace them. But there's still no machinery that can substitute a teacher and his or her relationship with students.

"We've seen advances in machinery and so forth, but the one thing you can't replace is that relationship building and also … the innate ability to read the situation. It can tell you how to put the screw in something, but if the screw doesn't fit, what's the solution?"

Green predicts the traditional school setting will stay. "I think you still need a community place to go," he says. "It may look a little different, the space may be designed a little bit different, you may have a little more flexibility within it," but "we still need teachers that are subject experts in a community."

But technology within the schools, he says, will continue to grow.

For her son, McMillan loves the flip. "I think it's giving him an advantage when it comes to actually getting prepared for college because he's going to be a little bit more technology savvy," she says.

And when students go to college and the model is flipped back to a more traditional structure, Green and Ward agree the technology and independence the students have picked up from their time at Clintondale will help them adapt.

Green says the school still tweaks aspects of the model every day. At the beginning, they had to find a technology with a limited number of steps to make it conducive to classrooms.

Ward will be speaking in Pennsylvania soon about the flipped model, sharing info with others who are interested with the hopes that Clintondale's successes and setbacks will "bring them along quantum leaps faster," he says.

"It's just trial and error because we're the first school to do this, and we keep pushing more and more, you know, further and further," Green says. "We're just carving the road for people."