Benefits of Playing an Instrument

There are numerous benefits of learning a musical instrument and it's important for kids to be exposed to music. Here are just a few perks. 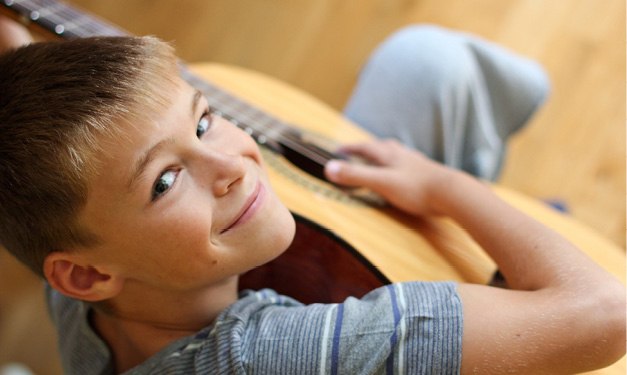 The sound of an 8-year-old boy drumming on a drum set can get a little overwhelming. But before you go burying the sticks in the backyard, remember that there are some serious benefits to kids playing instruments.

Even though many schools are downsizing or eliminating their music programs – due to budget cuts, for example – it’s still important to expose your children to music for benefits like boosted brainpower and improved social skills.

Jason Gittinger, a long-time drummer and the founder of The Detroit School of Rock and Pop Music in Royal Oak, knows a thing or two about the importance of music education. Learning an instrument, he says, can be a real bonus for kids. “A passionate pursuit of something that somebody likes gives them the ability to focus on something that they don’t (necessarily) like,” he says.

And pursuing passion is just a piece of the puzzle. In fact, the National Association for Music Education found even more benefits for kids who study music, including stronger language, memorization and reading skills, along with increased coordination and emotional development.

When it comes to getting kids interested in learning an instrument, Gittinger says exposure is step No. 1.

“Take your kids to see live music, play music in the car, expose them to music, and if you have problems doing that, seek professional help with people like us (at The Detroit School of Rock and Pop),” Gittinger says.

He also suggests that parents seek out opportunities for kids to learn to play instruments that they are interested in and enjoy – whether it’s the piano or the guitar.

“They need to care,” he says. “It’s really important for parents to give the kids something that they are attracted to and fan those flames.”

Then, get your child involved with other kids who share that interest. They can even have jam sessions together!

And here’s a fun idea for parents: Playgrounddad.com suggests that you learn alongside your kid. Or if you already play an instrument, ask kids to play right along with you.

“Young children love to do what their parents are doing. Ask them to play an easy song or a few chords. Play along on your instrument or solo on top of their chords,” Playgroundad says.

This way, music really does become a part of your family’s life.

Think your child would love to learn how to play an instrument? Sign them up for music lessons locally.