Swimming is great for a child's mental and physical well-being. Here are some additional reasons why parents should consider year-round swim lessons for their kids. 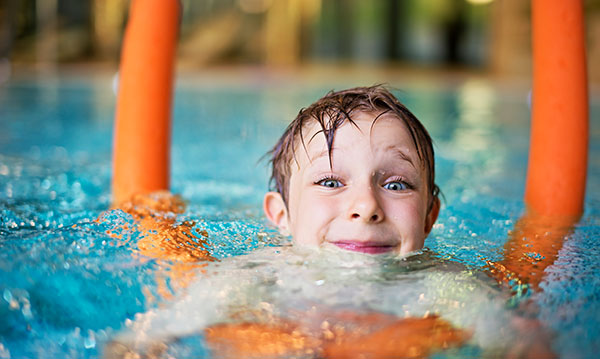 Chris McCuiston, founder and CEO of the metro Detroit Goldfish Swim School franchise of indoor kids swim classes, believes that just like eating, breathing and sleeping, learning to swim is vital – especially for young children. That’s why he advocates for year-round swim lessons.

“Swimming is a skill that not only benefits a kid physically and mentally; there’s a chance this skill will save his or her life,” says McCuiston.

“We’re very passionate about swimming. We live it, breathe it and sleep it. We feel swim needs to be an absolute staple in the lives of kids.”

Certain swimmers will take a swim-class timeout throughout the year for individual reasons, but McCuiston says it’s important to keep going and consider year-round swim lessons.

“In the winter time, swimming keeps the kids active, engaged and healthy,” says McCuiston. He says by working out and keeping fit, kids are boosting their immune systems.

Also, in the summer, he will often hear from parents that their kids are getting enough time in other pools, but McCuiston says it’s important to make sure kids don’t pick up bad habits over the summer and they stay confident in their skills.

“Swimming is year-round. We say build up on the swim skills throughout the year and show them off in the summer. Keep going through the classes and maintain the skills all year long,” says McCuiston.

“It’s just exposing the little ones to water and making sure they don’t develop bad habits or a fear of the water,” says McCuiston. He iterated that it’s important to keep up that touchpoint with the children so water becomes fun and not scary.

That is a concept they use for all of the students.

“Swim class should be a place that they want to go when they wake up in the morning,” McCuiston says. Through play in the pool, fun and celebrations, McCuiston says the kids learn to swim. Goldfish has islands in the pool that the kids swim to, giving them goals. When they make it to the spot, there is a lot of celebration.

“We also find that group swim classes are the best. There is a friendly competition that naturally occurs, pushing each child to better themselves,” says McCuiston.

At Goldfish, he says the class sizes are limited to four students, and it can also be fewer than that. “The kids leave here knowing this was a fun experience, but it’s also educational.”

Goldfish Swim Schools are individually franchised. Each hosts activities throughout the year, such as open swim, a Halloween party or a Christmas gathering that gives the students the chance to socialize in and out of the pool and develop relationships.

Goldfish also keeps the students moving through the ranks so they are able to advance out of swim lessons or into competitive swim sooner.

For those who can’t commit

When it comes to kids who want to do it all, play every sport and participate in after-school clubs, McCuiston says it’s important not to forget about swim lessons.

Kids might want to give up, but McCuiston says kids crave routine, and even if they don’t want to go to swim class today, parents should encourage them to continue going to develop the routine and keep up with the class lessons.

Year-round swim lessons do come with a price tag. McCuiston says the environment and teachers at Goldfish make the cost worth it.

“Our facilities cost money to run. We keep the water at 90 degrees and the air at 92 degrees so that it comfortable for the swimmers. Keeping things that warm costs money,” McCuiston says. “We also have small class sizes and fairly compensated teachers. The people we hire here are really, really good and we feel they deserve to be paid as such.”

It’s not just the services that cost money. McCuiston says families will make a memory by going to a Detroit Tigers game and paying the money for a one-time activity – but swim classes can provide that, too.

“We are trying to create great memories, but we are also trying to save lives by teaching kids to swim,” McCuiston says.

How to Beat Cabin Fever in Macomb County

The cold weather in southeast Michigan doesn't have to put a damper on family fun. Beat cabin fever with upcoming events and places to play in Macomb County.
Read more
Sponsored Content

Brought to you by Explore Flint & Genesee
Read more