Dad Jason Gittinger, Founder of The Detroit School of Rock and Pop Music 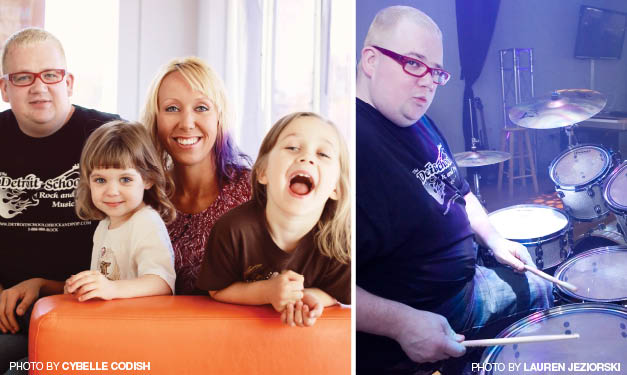 Jason Gittinger has, quite possibly, the coolest job ever. The dad of Jazzy, 6, and Sammy, 4, founded and runs The Detroit School of Rock and Pop Music.

Yep, that's right – a bona fide school of rock. Set aside ideas of a slacker Jack Black type like in the movie, though: Gittinger's driven by a sense of mission to help people realize their rock star dreams and more, both onstage and off.

"Our goal is, one, uniting people around music," Gittinger says, "and two, we give people greater life skills by them doing something they didn't think was possible: playing in a room by themselves."

Gig: director and founder, The Detroit School of Rock and Pop Music
Age: 35
Wife: Sherry
Hometown: Royal Oak
Kids: Jazzy 6, and Sammy, 4
Dad declaration: What's left when I am gone? Am I going to leave good positive things in my wake or negative things?

Walk into the DSRP, as it's known, in Royal Oak and it feels like you've stumbled into a warm, welcoming – and sometimes very loud – clubhouse. In one room you might find a nationally known jazz band rehearsing; in another, a kid barely old enough to see over the drum kit taking a lesson; next door, a group of middle-aged adults realizing their longtime rock 'n' roll dreams by forming a band.

It even houses a "shrine to my 2-year-old self," as Gittinger quips, complete with a Muppet-looking "Puppet Jason" (aka PJ) and a pint-sized, sparkly, pale blue vest and bowtie, in a frame. He indeed wore it as a tyke while playing the drums – which you can see in the photos right below it.

"When a parent asks, 'What's your musical background?'" he says, "I point and say, 'I've been playing a loooong time!"

Lots of small fries definitely rock out here. There are private lessons, but the adult band programs set DSRP apart. Gittinger and his crack staff set up aspiring musicians with other players to form a band – a more viable alternative to putting an ad in the local entertainment weekly or tacking up fliers at music stores. Most are older and have families, so the "random coincidence" method doesn't work as well.

And, as a longtime musician, Gittinger has a good read on musical chemistry and plays matchmaker accordingly.

Influences range from Pat Benetar to Green Day and a lot of originals. A few times a year, the DSRP bands perform publicly; student bands are all over the metro area at local festivals and on local TV, too.

"I wanted to surround myself with people that care as much as I do," Gittinger says. "If that means they're 7 years old, that's awesome – if they are 70 and just starting out, that's also awesome. We're looking to grow their knowledge base as well as foster an unquenchable thirst and curiosity for everything – not just music."

Gittinger launched the DSRP five years ago, in March of 2008. After years as a professional drummer – including a just-concluded 10-year stint behind the kit for the wildly popular 1980s cover band The Mega 80's – and as a new dad, he was looking for the next phase in his career. He and wife Sherry, who he met when they both had summer gigs at Cedar Point (she was a singer/dancer), created DSRP in a former bike shop and had a good base of students right away.

Wanna rock? There are programs and private lessons galore at The Detroit School of Rock and Pop Music at 1109 S. Washington St. in Royal Oak. Cal 888-988-ROCK to learn more.

"I knew I can't do (drumming) forever, but I do not have any marketable skills I could use to get a real job," he says with a laugh – although, as it turns out, he's become an accomplished jack-of-all-trades at the school.

Jazzy was a toddler at the time and Sammy was on the way. Both parents have structured their lives in such a way that the girls are always there, doing homework, taking lessons or charming visitors. "They have lots of friends here," he says. "A lot of the parents have known them since they were babies; since our staff are mentor figures to their kids, the parents are the same to my kids, too. They have a lot of aunts and uncles here."

Every Thursday, he has "Jazzy, Sammy and Daddy Day." Sherry goes into the office and gets uninterrupted work done while he takes the girls out for fun. They go everywhere from monster truck rallies to the play area at Great Lakes Crossing Outlets in Auburn Hills.

Music: I'm like the United Nations of music: I'm open to all kinds, as long it's positive and connects people.
Favorite artists: Bruce Hornsby, Sting, Coldplay, Pat Metheny (and many more!)
Hangout: Henry Ford Museum, Great Lakes Crossing Outlets
Food: Anything my wife cooks
Restaurant: Carrabba's Italian Grill
Beverage: Water or coffee with lots of caffeine
TV show: Family Guy (without the kids!)
Readable: Google News
Hobby: Anything my kids take a liking to; making sure my car is clean
Hero: Our students and their parents – and the board of trustees of the Live the Music Foundation
One item he can't live without: Internet access

It's not much different from how Gittinger grew up. Both his parents were musicians: Mom taught music at the local school, and dad tuned pianos, fixed organs and more. Both played in a wedding band and the local community band, too.

"They didn't make a ton of money, but we had music and we had each other – and, dare I say, we're in the same boat at the moment."

Starting DSRP during the worst economy since the Great Depression might have seemed risky. But they felt the time was right for a place that was trying to do what they're now accomplishing. There's a "yearning for a sense of community," Gittinger says. "This place is sort of a refuge for people, in music terms, like another place might be in religious terms."

His latest project is the Live the Music Foundation. It's a nonprofit that provides tuition help, and sometimes equipment, to students who have shown a real commitment to improving as musicians but can't afford it. Starting it has been Gittinger's plan from the get-go, but it took a special connection to one student to get it off the ground.

Kevin Rushton was one of DSRP's first adult students. Last year, he stopped to Gittinger's office and told him he had cancer – and a few months to live. In his honor, the faculty put on a "bucket list" concert, which drew people from all over the world to see Kevin's band play. It raised the money to start the foundation. And it showed the sense of community among musicians, Gittinger says.

"It's giving people the ability to step outside their comfort zone," he says. "In a band, you learn that 'I give a little bit of myself to these people and they'll give some of themselves to me, and what we can create collectively is going to be so much better.'"