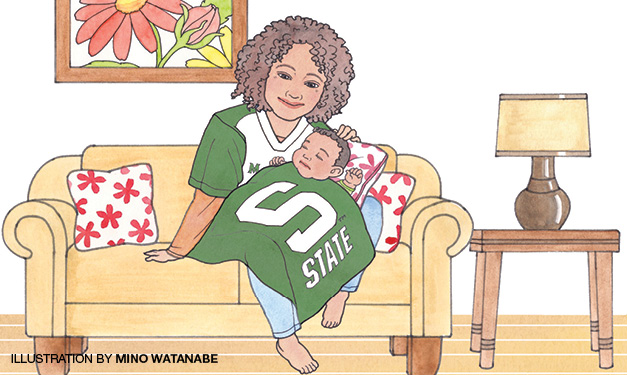 Some women present stretch mark-striped abdomens or misshapen postpartum body parts as evidence of the ultimate personal sacrifices they made for their children.

Me? I’ve got an unused college football game ticket my son will hear about for the rest of his life.

By the time he was 15 months old, my son, Blake, had never had a stomach virus. Ear infection? Sure. Fever and teething pain? Of course. But the only time he ever upchucked his stomach contents was when he overfed himself once at dinner. Then, on the day I had a ticket to the Big Ten championship game between Ohio State and Michigan State, he chose to vomit repeatedly over a 12-hour period.

Three years later, Michigan State was ranked 10th nationally and was facing Ohio State, ranked second in the country, for a chance to win the conference title – or at least earn a trip to the Rose Bowl. And I had a ticket to the game in Indianapolis. Nice seats, too.

On a cold, sunny Saturday morning, my husband, Corey, packed the car for our road trip. We had a plan – meet my brother, also a huge sports fan, for some family bonding before kickoff, and then my brother and I would go to the game. We only had one ticket, and since I was the sports fan in our household, my husband – who couldn’t have cared less about the game – graciously volunteered to handle child care duties in the hotel. How’s that for stereotypical gender role reversals?

We got on the highway at noon, patting ourselves on our collective backs for leaving in plenty of time to get there before the 8 p.m. kickoff. I sat in the back seat with my son, who I was sure would fall asleep within minutes. Instead, his little face began contorting into unusual expressions, ones that indicated that he was more than just a little tired and fussy. As a stream of mucus began dribbling from his mouth, my husband suggested he might be suffering from motion sickness.

Or at least that’s what I tried to convince myself. Less than three minutes later, a rancid mix of oatmeal and milk spewed all over his body, drenching his coat and shirt. His morning breakfast kept emerging from his body in unstoppable waves.

Corey pulled off the highway into a fast food parking lot. He came to the back seat and flinched upon seeing his son covered in foul-smelling vomit. “We’ve got to get him home and clean him up,” I said.

We turned around. Still hoping he was suffering from little more than motion sickness – we had moved his car seat to a different vehicle for the drive, and perhaps it was positioned awkwardly – we decided to bathe him and let him nap at home before trying again.

He had other ideas. After a quick sponge bath, I laid him down and he purged himself again.

“We could still try to get there,” he said. “It’s only two hours away, and you’d still have time to make the game … or you could just go and I’ll stay home with Blake.”

“No way,” I said. I was not leaving my sick son behind for a stupid football game.

I contacted my my brother, who had the tickets and was already in Indiana, and every other family member who expected me to be at the game and told them the trip was off.

They seemed more upset than I was.

My mother offered helpful suggestions. She knew how much this game meant to her sports-crazy daughter. “Does he have a fever? No? Well, clean him up, strap him in the car, offer ginger ale and crackers and he’ll be fine. You can still make it!”

As she issued orders, I looked at my sleeping son next to me on the bed, his little hands touching my legs, and all I could think of was his poor stomach churning while he sat upright in his car seat.

And what if we got there and he became sick while I was at the game? Although my husband was more than capable of handling him, I couldn’t bear the thought of being away from my sick baby while I was watching a sporting event.

“Thanks, Mom, but we’re going to stay home. It’s OK. These things happen.”

I was surprised how easily I let go of my well-laid plans to attend the biggest game of my lifetime. The instant I saw how sick my son was, visions of gridiron glory evaporated and my mind shifted to protective mama bear mode. My baby needed me. How could I not be there?

That’s when I knew I’d mentally made the transition to thinking like a mother. I used to wonder how my own mother was able to surrender her desires at the last minute when I was sick, and felt bad for the many sacrifices she made for me.

She’d always assure me it was no problem. When her children were sick, the place she most wanted to be was right beside them, but I didn’t believe her until now. When it comes to your child’s well-being vs. your personal gratification, the kid always wins.

I admit that part of me hoped for an Ohio State blowout victory that would make me feel that my son saved me from a night of frustration, but that’s not what happened. Michigan State beat Ohio State by 10 points in an exciting game of point swings, coaching chess, hard hits and, ultimately, roses in the end. The team was going to the Rose Bowl for the first time since Jan. 1, 1988, when I was just 11 years old.

And I watched it all from bed with a 15-month-old’s head resting in my lap, save for the few times I had to lift him upright to catch another round of vomit.

It was the best seat in the house.

Want to teach your young child Spanish or English? Try these board books that they are sure to love.
Read more
Advice