Girls More Likely to Get Sports Concussions than Boys

A new study suggests girls are more susceptible to concussions than boys. Discover the reasons and learn what you can do to prevent and treat them. 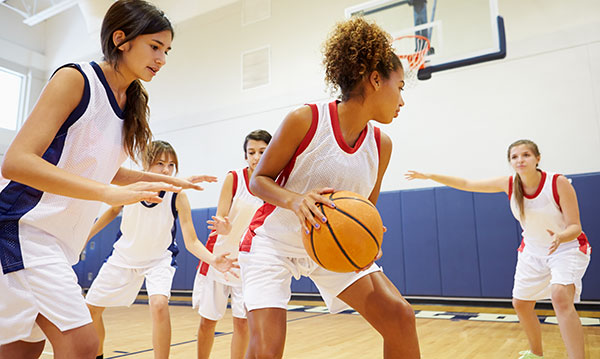 Sports are a great gender equalizer. For years, women fought for their own professional leagues. Now, we have a space of our own and we’re killing the game – and taking a few hits while at it. And a study published in the Journal of Athletic Training has found female athletes have a 56 percent higher rate of concussion than male athletes playing the same sport.

The second main reason is communication. Girls were more likely to report their concussions while boys have a tendency to, “shake it off.”

What is a concussion?

“Concussions really occur through biomechanical forces,” says Dr. Brad Merker, the division head of neuropsychology and co-director of the Sports Concussion Clinic at Henry Ford Health System in Detroit. “Energy (is) transmitted from an object through the skull and that affects the brain.”

Basically, a concussion is caused when the brain is either rotated or when it accelerates and decelerates quickly, which causes stretching and shearing of the axons, Merker says. Those are nerve fibers that connect neurons to other neurons or muscle or gland cells and send nerve impulses away from the cell body.

Concussions are common in sports “that have a high likelihood of contact,” Merker says, like football, ice hockey, soccer, basketball and lacrosse to name a few.

Issues that are unique to girls

“There’s a lot of speculation that females are more susceptible to concussion due to differences in hormonal systems, brain organization and even musculature,” Merker says.

The higher level of hormones in girls affects the intensity and duration of the symptoms they experience during a concussion, according to the study.

“Females may have greater metabolic demands by the brain and that, as a result, may lead to having them experience more intense and prolonged symptoms,” adds Merker.

Another factor to consider is an individual’s likelihood of reporting a concussion. Merker says boys may be reluctant to report symptoms because of social stigma and fear of letting their team and coach down.

Signs of a concussion – and what to do

Concussions are dangerous because symptoms can go untreated and getting a second injury while having a concussion can be detrimental to your mental and physical health, Merker says.

“The health implications from a single concussion are relatively minor,” Merker notes. If symptoms persist longer than two weeks, though, that’s a sign to take your child to their pediatrician or a specialist.

By the time kids visit his concussion clinic, he says, they’ve been evaluated on the field by a coach, athletic trainer or medical personnel and may have already received ER or family doctor attention.

“We’re basically doing an evaluation of their ongoing symptoms and we’re treating those symptoms generally through over-the-counter medication, through moderate periods of rest and implementing a return to cognitive activities to school (and) normal social activities,” he says.

Merker also debunks an “old myth”: You do not need to wake up a concussed person every two hours. “We recommend that people monitor an athlete (who) has had a concussion, but there’s no need to frequently wake them up anymore.”

Merker’s main piece of advice to parents and kids for preventing and dealing with a concussion is simple: Educate yourself.

“Knowledge really is the most important aspect here,” he says. That includes “having appropriate knowledge of what the concussion symptoms are, how to get an appropriate evaluation, and what to focus on in recovery.”

“You don’t need an actual bump to the head to experience a concussion,” Merker says. “Any force to the chest or body can be transmitted up into the brain to produce a concussion.”

And before you cheer your kid on during that basketball championship game, educate them, too, on what a concussion is and how to recognize the symptoms.

Although symptoms show almost immediately, Merker says, in some cases they can develop 24 to 48 hours later, so monitoring during that time period is key.

Sports definitely have many benefits for kids, but it’s equally important to exercise caution on and off the field.

One solution? Neck-strength training. Girls’ higher likelihood of getting concussions could be related to the strength of the neck muscles, Merker notes. Building strength “can mitigate the impact of the oncoming force.”

“Their neck muscles aren’t as strong, so it doesn’t prevent the head from swaying side to side or back and forth or rotating as much as their male counterparts.”

And, regardless of gender, concussions are a common danger for all sports-playing kids that can be avoided with proper precautions.

That can include practicing strategic tackling methods that limit contact to the head – and, of course, always wear safety equipment such as helmets.

Sports are arenas where rules are created for the safety of the players, Merker says, and he urges athletes to stick to the rulebook to prevent injuries.

“You have to play smart and use proper technique.”