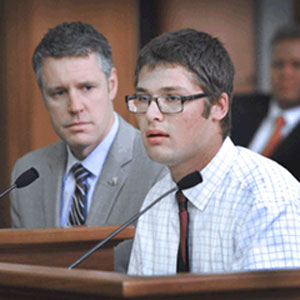 Lewand is boosting the NFL support initiative in getting this legislation passed all around the country. In February, the NFL made it its mission to have a federal law on the issue. Since then, the matter seems to be moving swiftly at the state level. Thirty-five states and the District of Columbia have passed laws in some way dealing with youth sports. Michigan looks to be No. 36 in the coming weeks.

The bill – and a teen's case for it

On May 17, Sen. John Proos (R-St. Joseph) brought Senate Bill 1122 before the senate health policy committee. With the help of Lewand and high school student Alex Padla – who's experienced the impact concussions have firsthand – the bill was passed unanimously.

"It feels great that someone is stepping up and handling the concussions matter," says Alex Padla, who lives in Berrien County, near the state's southwest corner. "Concussions are not a joke."

In October 2010, Alex suffered a concussion during a football playoff game. His coach pulled him out of the game after seeing a "ding" Alex sustained during a play. In the end, the coach and athletic trainer decided to put Alex back in the game.

"At half time, parents said he was in another world," recalls Dr. Dennis Padla, Alex's father.

Alex has suffered a concussion – which means, according to Michigan High School Athletic Association (MHSAA) guidelines, he should not have returned to the game.

According to the Centers for Disease Control and Prevention, from 2001 until 2009, an estimated 173,285 people ages 19 and younger were treated each year in emergency departments for nonfatal traumatic brain injuries – or TBIs – related to sports and recreation activities.

This figure makes up 6.5 percent the estimated total number of sports and recreation activities injuries for young people. The research also found the majority affected were, like Alex, male.

How the bill will help

If Senate Bill 1122 is approved, it will amend Michigan's public health code. Schools and other organizations with sports teams will be required to provide educational resources regarding concussion awareness and training to coaches, athletes and their parents.

On the field, the bill says a player suspected of having a concussion must be removed from the game. To return to the sport, the player needs written medical clearance from a licensed professional. However, a player will not be allowed to return to the same game from which he or she was removed.

"There will be much greater reluctance to put players back in the game when a suspected concussion occurs – if there is a law," Padla says. "No law is perfect, but a law would make pulling players out legally right and morally right."

The MHSAA currently has guidelines for the schools involved; however, if the bill is adopted, some modifications will have to happen. MHSAA concussion protocol won't be subject to the bill. However, concussion training will be required for coaches, volunteer and paid, as well as assistant coaches.

To help create these awareness programs, the state's community health department will offer educational material groups can access via its website. Organizations that already meet a minimum training standard will have little to no change under the new bill. Those that don't meet those criteria, though, will have to incorporate the new policy.

"Through the training, individuals will learn what to look for, how to deal with concussions and know concussions don't necessarily 'knock you out.," says John Johnson, MHSAA communications director. "Awareness helps to prompt health and wealth."

Watch for an online awareness program, too, if the bill passes – also planned for the community health department's website. Some districts already offer a 10-15 minute online program that requires you to read material and then answer questions. Understanding the impact of concussions is a key factor.

"As a youth athlete, when you damage the brain, you are damaging your future," Padla says.

There is little opposition to the bill – which Proos hopes will create safer playing environments for student athletes.