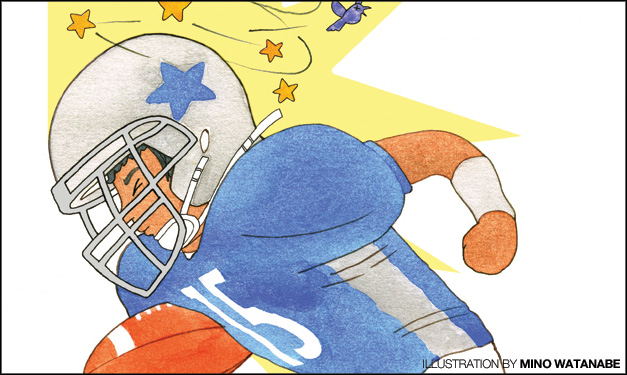 Getting pushed, tackled and checked can be pretty rough on the head – and there's only so much a helmet can do. After a particularly hard tackle, the brain can be temporarily disrupted if it is rocked back and forth or twisted inside the skull. This is what's called a concussion, and it's a big deal in sports. Particularly at the level involving kids.

The risk of concussions in school sports has become a hot topic in recent years. More than half of all states have laws to protect youth athletes from concussions. Michigan recently became one of them.

What the new law does

Gov. Rick Snyder approved legislation in October 2012 to reduce the risk of concussions to young athletes and stave off long-term damage if they do suffer a concussion during play.

The new law tackles the issue in two ways: First is an awareness-based initiative to inform coaches, staff and volunteers about the signs and treatment of concussions.

The other part of the law will directly affect games. Coaches now must remove student athletes from play if there is even a chance they may have suffered a concussion. The player may return only after receiving a doctor's written approval.

"Research consistently has shown that concussions are a serious health threat to athletes," Snyder said at the signing of the legislation. "Coaches and parents need to be proactive in recognizing the signs of a concussion, so we can protect injured children and teens from any further complications."

Experts have repeatedly found that untreated concussions can lead to permanent brain damage and other serious health issues.

Among 15-to-24-year-olds, sports are second only to motor vehicle accidents as the leading cause of concussions, according to a study by the Research Institute at Nationwide Children's Hospital in Columbus, Ohio.

The study says that an estimated 300,000 sports-related concussions occur every year. The sport most commonly associated with concussion is – you guessed it – football.

In a 2008-10 study, the institute found that nearly 50 percent of all sports concussions resulted from football. These athletes also had a higher chance of getting a concussion than players of other sports.

"Concussions appear to be on the rise, but I think it is in large part due to awareness of the injury," says Brad Zube, head football coach at Stoney Creek High School in Rochester Hills. "Before we used to just think it was a bad headache from a big hit."

Zube agrees with the legislation, believing that such a law will bring more awareness – which can only be a positive.

"These boys seem to be getting bigger and faster every year, and so are their injuries," he says. "Equipment is getting better and prevention techniques are being taught, but injuries will always be part of the game."

The Michigan High School Athletic Association offers a list of signs and symptoms that parents, coaches and teachers should watch for.

According to the association, many clues appear immediately after the injury, while others may develop over several days or weeks.

If the player immediately appears dazed, confused or clumsy, he or she may have a concussion. Some of those long-term signs, however, are less obvious.

A player with an untreated concussion may just experience a slight shift in their personality, feeling sluggish, groggy or often confused. Untreated concussions can often lead to the athlete struggling in schoolwork, since long-term memory, concentration and organizational skills can be impacted.

Treating a concussion involves rest, mental and physical, to avoid any further harm to the brain. The MHSAA offers a day-by-day schedule for treating and reintroducing a student athlete into play, moving from light exercise to full-on play.

"The health and safety of our players can not be overlooked for any reason," Zube says. "We know now the true danger of concussions, so we are handling them much more carefully."