How to Prevent Sports Injuries in Kids 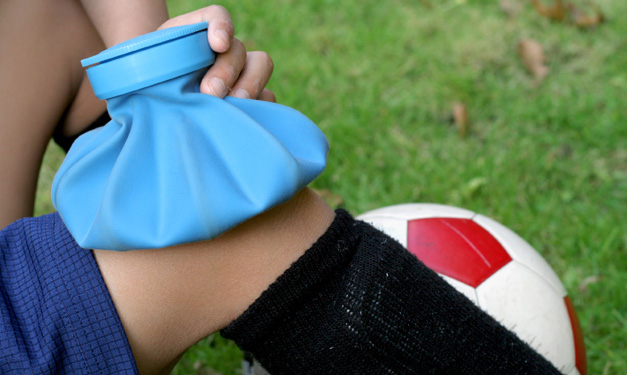 More American children are involved in sports now than ever before. Sports can help children and adolescents keep their bodies fit and feel good about themselves. However, children need to take proper safety precautions to prevent injury.

One of the best methods to prevent sports injury is wearing the proper safety gear for each sport. Helmets, which should meet U.S. Consumer Product Safety Commission standards, are the most important safety gear of all.

“A helmet can prevent serious head injuries if worn properly,” said Dr. Thankamani Krishnan, a pediatrician at Henry Ford Medical Center-Royal Oak. “Children do not consider bicycling, rollerblading, skateboarding, skiing or snowboarding as a sport. People do not think of unorganized sports as real sports.”

But a bicycle or skateboarding injury can be just as serious as a football injury.

Knee and ankle sprains, torn ligaments, cuts and bruises are often the results of sports mishaps. But head injuries are becoming more common, and Dr. Krishnan said she sees a lot of patients who come in with mild anterior head injury. A cerebral concussion is a mild form of traumatic brain injury. Common symptoms of concussion include headache, vomiting, dizziness, confusion or even amnesia. Loss of consciousness does not always occur. Concussions are considered a closed-head injury, but are usually not considered life-threatening. They don’t include structural injury to the brain.

A CT Scan of the brain should be performed when there is any concern about a serious brain injury, or if there is any of the following signs or symptoms: prolonged loss of consciousness, persistent confusion, repeated episodes of vomiting, a worsening headache, lethargy, irritability or decreased alertness, seizures or any neurological abnormality.

“I tell them they have to keep their brain healthy, so that they can play during the next season,” Dr. Krishnan said. “Premature return to play by a symptomatic athlete places the child at a greater risk for another injury with serious complications.”

Any child who is suspected of having a concussion should be removed from play and monitored.

As a warning to children who resist wearing a helmet, Dr.Krishnan cited one of her more serious cases: “I had a patient who was a varsity football player who could not play any contact sport because of a serious head injury sustained while riding his bike without a helmet.”