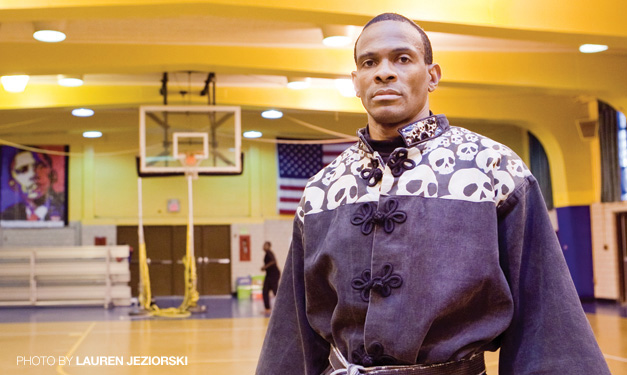 Anyone who’s dealt with middle school kids knows how hard it can be to get one of them to sit still, pay attention and be quiet – much less a few classrooms’ worth of them. But that’s exactly the scene inside Detroit Premier Academy two afternoons a week.

In a school gym, rows of children watch raptly as older students shout in unison the martial arts creed they have learned by heart. It’s centered around four themes: fortitude, temperance, prudence and justice.

Boost your kids’ confidence and get them active through a martial arts class near you. Check it out in our Kids Classes directory.

“Set!” calls principal Vondra Glass, who is leading the class – and the students bend their knees, center their weight and lift their fisted hands parallel to the floor. Then legs, hands and arms move in unison, fast as lightning, until Glass yells “Switch!” and they do the same movement from the other side.

Again and again, they practice: bodies flexed like a cat ready to jump, limbs moving like switchblades and voices calling out something that sounds like a cross between a yell and a roar as each move reaches its conclusion.

Then something amazing happens. Glass, who has the quick moves and coiled strength of a longtime martial arts practitioner, goes down the line of students and kicks each one in the solar plexus, hard enough to make some of them say “oof.”

It’s designed to teach them to take a hit, Glass says – and the martial arts lessons he provides students do just that, in ways that stretch far beyond the cavernous gym and into the hardscrabble neighborhood that surrounds the school on Detroit’s northwest side.

While the neighborhood shows signs of investment – a development of stylish new houses sits just across from the school on Tireman Street, and adjacent is the beautiful, sparkling new NFL education center for at-risk kids, a legacy of the Super Bowl XL – these are bright spots amidst the blight. Many of the kids at this charter school come from the neighborhood and are fighting against a society that writes off kids like them before they even get a chance to show what they can do.

The staff at the school, though, isn’t going to let that happen – if they have anything to say about it. Posters line the walls, outlining the behavior expected of the kids, and encouraging them to achieve their best. Staff is strict with the kids, but warm and encouraging to them and their families.

Glass joined Detroit Premier Academy in 2000 as an assistant principal at the Warrendale campus, and became principal of the Tireman campus about seven years ago. He started as a math teacher at the University Prep schools in Detroit and moved into special education and then administration there.

He started martial arts at age 7. He lived in a tough part of Southwest Detroit and was frequently getting beaten up by neighborhood bullies; he still has a scar over one eye from one particularly brutal attack. His mother arranged for two neighbors to teach him martial arts in exchange for them hanging their heavy punching bag from a tree in her yard.

Glass went on to compete in martial arts. He wears a black, Japanese-style gi when he teaches. It’s decorated with skulls and crossbones, something that seems very much at odds with his calm, quiet demeanor. He explains that when he reached a certain level in his training, his teacher allowed him to design his own gi with a symbol of something that was meaningful to him. In his case, he’d nearly died from an asthma attack while practicing, and the skulls and crossbones are a symbol of his cheating death.

“My gi says that – meeting death on the floor,” he says. “The gi tells your story of what got you across.”

He believes that teaching his students martial arts can combat a whole host of woes that today’s kids face, from bullying to obesity to low academic performance.

Bullying is what draws many kids to the martial arts class at first. While Glass has a very strict rule against fighting – “If they get in a fight, they’re off the team,” he says; “I don’t want them using what they learn here against others” – he does have his students demonstrate what they can do at school assemblies. “A potential bully will see one of these kids break a board and they’ll say ‘Oh! Not going to do that!'” Glass says. It also gives the students confidence that they can defend themselves against attacks if need be, and exuding that self-assurance makes them less of a target.

The exercise, lightning-fast movements and physical control needed to perform martial arts make a big difference in children’s health. Often, kids who are beginning to gain weight start the class and, after a few weeks, their weight starts settling into the normal range, he says.

But the real magic, the thing that makes these lessons so much more than a hobby, is the discipline and focus needed to perform. For most extracurricular activities at the school, students must have at least a 2.5 grade-point average, be within 5 percent of proficient on standardized tests, and have mostly good behavior reports. With these kids, though, Glass relaxes that, because he wants kids who need to be there – those that are struggling academically or socially – to be able to join the team.

Menelik Burnside, an eighth grader at the school, is one of those kids. He joined the team at Glass’ urging in fifth grade, when he was getting into a lot of trouble and not doing well in his classes. He made the commitment to stay, and found that his grades and behavior improved. He’s now in honors classes, preparing to apply to the elite Cass Tech, Detroit School for the Arts, and Renaissance high schools and talking about college – something Glass says was not the case before.

“When I started coming here, he started talking to me and started giving me a chance,” Burnside says of Glass. “This is a discipline class, and he would always discipline me when he found out I was being insubordinate. He would break that in front of the class, whether it was making me stand there and take punches or do jumping jacks or whatever.”

Now, Burnside also teaches the younger students in the class and shows a lot of patience and kindness with them – even though it’s sometimes difficult, he admits. “It means a lot to me that I actually do so well that I am an example,” he says.

Glass is very big on having the more experienced students teach the younger ones – something he believes instills strong relationships and a sense of responsibility and giving back among the younger kids. “When you learn something, you are responsible for teaching it to someone else,” he says.

When their academic performance goes up, it can change the ideas these students have about their future, he says. “The success academically will change their lives forever,” he says. “Their test scores and their grades start improving, and that’s just the start of changing them, so they can change their socioeconomic situation. It makes it easier to shift the conversation to talk about more substantive things than trying to fish them out of trouble all the time.”

Martial arts might be an unorthodox method to do it, but changing the lives of young people – giving them a belief in their future – is what keeps educators going.

“It makes it worth coming to work, because you know what you’re doing is actually making a difference, and you can see it,” he says.