Secondary Drowning Danger for Kids Can Go Beyond the Pool

Learn what secondary drowning is, how to spot it and what you can do to keep your kids safe this summer. 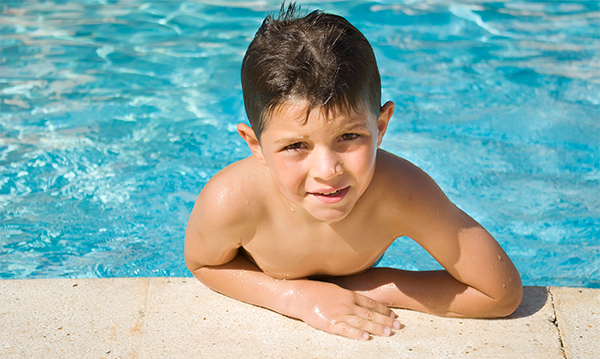 It’s every parent’s summertime nightmare. You’re having a swell time at the beach or local pool when your child suddenly slips beneath the surface. You panic and scramble to get to them as the lifeguard plucks them from the water.

You thank you’re lucky stars that your child is okay, make a mental note to have your child fitted for a lifejacket so that they’re safe in the water next time, and call it a day. You’re out of the clear, right?

Wrong. Even a few gulps of water could put your child at risk for a condition known as secondary drowning, or dry drowning. Symptoms of this condition could show up hours, days or even weeks after the initial incident and can be fatal.

So, what do you need to know about dry drowning and how can you keep your family safe this summer? A local expert chimes in.

Secondary drowning occurs when water is “aspirated into the lungs and collects there as a person struggles in the water,” an article by the Cleveland Clinic reports. “That collection of fluid in the lungs is called pulmonary edema, which causes difficult or rapid breathing that can make a ‘crackle’ sound.”

“What happens is there is a significant ‘submersion’ event first – not somebody dives in and comes out,” he explains, “and, immediately after rescue, seems generally OK. The patient can be conscious; they can talk, say, ‘I’m OK, whatever’ and walk around. Then, after two or three hours, they start to develop a certain amount of respiratory difficulties.”

They can take up to six hours to show symptoms, he adds. “What is happening here is that some amount of fluid has damaged the air sacks,” causing respiratory damage. “The lung is kind of slowly reacting to the original event, and the small blood vessels of the lungs start leaking fluid into the air sacks.”

Though its name implies water as the culprit, secondary drowning can be caused by a number of things.

“It can happen if water from a pool gets into your lungs, but also if you aspirate a piece of food or vomit,” Dr. Mark Morocco, a professor of emergency medicine at the Reagan UCLA Medical Center, told Today Health in 2014.

Even something as small as a peanut in the lung can trigger this condition.

A child experiencing secondary drowning will often exhibit signs of respiratory distress – including difficulty breathing, choking and an increased rate of breathing, Sarnaik says. He or she may become tired due to lack of oxygen. If left untreated, the child could even die.

“If the child is tired or a little short-of-breath” after an incident where you suspect this condition, “certainly do not put the child to sleep. This could progress, and the child could die of the injury,” Sarnaik says. “Frothy fluid coming from the mouth could be too late to save them.”

If you notice signs and get your child the proper medical attention right away – “It could just mean observation, giving oxygen or in some cases they could be put on a respirator,” Sarnaik says – “once it is taken care of, there are no long-term effects.”

In order to prevent secondary drowning, Sarnaik recommends “keeping the pool locked, fenced in and doing the proper prevention.” That includes teaching kids basic water safety tips, according to tips on the U.S. Consumer Product Safety Commission’s Pool Safely site, and “staying close, being alert and watching children in and around the pool.”

Sarnaik adds that children at the pool should be under constant supervision by an adult that is able to jump in and save them. And, if a child does become submerged, it is always best to get him or her checked out afterwards – just in case.