This Mom is a Real Hula Girl! 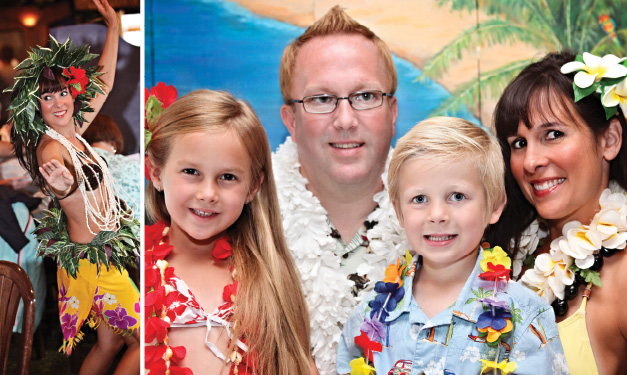 This story appeared in the September 2011 print edition of Metro Parent.
Photos by Kristen Hines

It doesn’t matter what the weather’s like in southeast Michigan. With her swishing grass skirt and warm smile, Erika Bonet-Bonk is creating a year-round tropic oasis on St. Clair Shores’ Nautical Mile.

“I love the whole feeling of hula,” says Bonet-Bonk, who performs 6-7:30 p.m. “I get to dance barefoot and wear my hair down. I don’t deal with any grumpy people.” But best of all?

“My favorite costumers have always been the kids,” she says. “They’re so adorable. Some will give me a hug before they leave,” or write “I love you” notes on napkins, which Bonet-Bonk tucks in a scrapbook. On occasion, they’ll even join in. Which is just fine: Audience participation is always part of the show. You might even spot her own two kids there some nights – especially 5-year-old Madelaina, who’s already following in mom’s shoeless footsteps.

“She likes to imitate what I do” – in one of her little hula outfits, of course. “I would love for her to learn. I think as she gets older, she’ll really appreciate it.”

For Bonet-Bonk – who also performs at parties, private luaus and senior centers with a local troupe called Kahoku (kah-HO-ku), which translates to “the star” – that’s definitely been the case. Hula started out as a whim, when she was bouncing around hobby ideas with her mom. She was then 22.

“Very late to start anything in dancing,” admits Bonet-Bonk, who’d taken ballet growing up in Clinton Township. Not exactly run-of-the-mill, either. But she found a Hawaiian class at nearby Dancer’s Workshop in St. Clair Shores.

“I fell in love with it from Day One.” So did her teachers, a mother-daughter team. “They joke that they were plotting to have me join their (show) group before I even knew it existed!” By 25, she was in. “They knew I had potential.”

Today, that shines when Tiare (tee-AH-reh) performs. Bonet-Bonk’s stage name hints at some of her loves. It’s the name of a pretty tropical flower – and the title of her trademark dance, a slower Tahitian number called an aparima.

“These dances tell a story,” she explains. Located in the South Pacific, Tahiti is also known for its oteas – the more drum-driven, rapid-hip-shaking dances.

At Waves, Bonet-Bonk performs iconic hula, too, which represents the Hawaiian Islands. Those vary from ancient, instrument-driven kahiko chants to modern auanas – beloved, if kitschy, songs like “Tiny Bubbles” and “Little Grass Shack.”

Those especially resonate with older crowds. “It takes them back,” she says, recalling trips to Hawaii or being stationed there in wartime. “Some people think these songs are cheesy,” says Bonet-Bonk, “But these are just two different categories” – art and entertainment. “We do both.” She sometimes even dances along with an Elvis impersonator for a little taste of Blue Hawaii.

With her long brunette mane, Bonet-Bonk is often asked an obvious question.

“I’m not Hawaiian,” says the dancer, who’s a mix of Spanish, Russian and German. “I just love Hawaii – and all things Hawaiian.” Or island-inspired. From her fave fragrance (Bobbi Brown Beach) to local outdoor spots (Metro Beach and the shore in New Baltimore). She and hubby Jeff, a design engineer, visited Hawaii for their five-year anniversary, where Bonet-Bonk danced onstage during Germaine’s Luau.

At the high-school sweethearts’ Chesterfield home, shells and tropical frames dot aqua walls. There’s even a proper faux palm tree. “We just like that resort feel.”

It’s also “Party Central House.” The kids’ closest pals live on all sides (mom’s been known to host mini hula lessons in the living room). But the most authentic flavor of Hawaii may be in the basement, where Bonet-Bonk’s costumes live.

“I have so many. They’re addictive!” Like the showy Tahitian duds, with huge fern- and feather-festooned headdresses and hefty 15-pound skirts (“That’s another bonus of my job: It forces me to stay in shape!”) Or the grass skirts, from simple to the tinsel-y “Hollywood hula” types. And all varieties of colorful leis, hair flowers and sarongs – even a long mumu or two.

But, as the old song goes, “Keep Your Eyes on the Hands.” While hula offers eye candy galore, “Our hands are telling the story. Even when our hips are moving!”

As a freelancer, her busiest months are June-September. You’ll also find Bonet-Bonk juggling mom duties and taking psychology classes at Macomb Community College. Hula’s a part-time gig, but a full-time passion. One she hopes to see grow.

“It’s not nearly as common as, say, ballet, tap and jazz,” Bonet-Bonk says. And, while not as popular as it was during its mid-century heyday, she sees potential.

“Hula’s really fun for kids. It’s good exercise. It teaches grace. I wish I would have known about it sooner.” And while it has a few job hazards – like performing an otea in extreme heat, or a few overly-eager-to-participate crowds – the perks are far greater.