Madison Hill of Detroit is using the income from her snack bar biz to help offset the medical costs of her friend's expensive, life-saving Gastroparesis surgery. 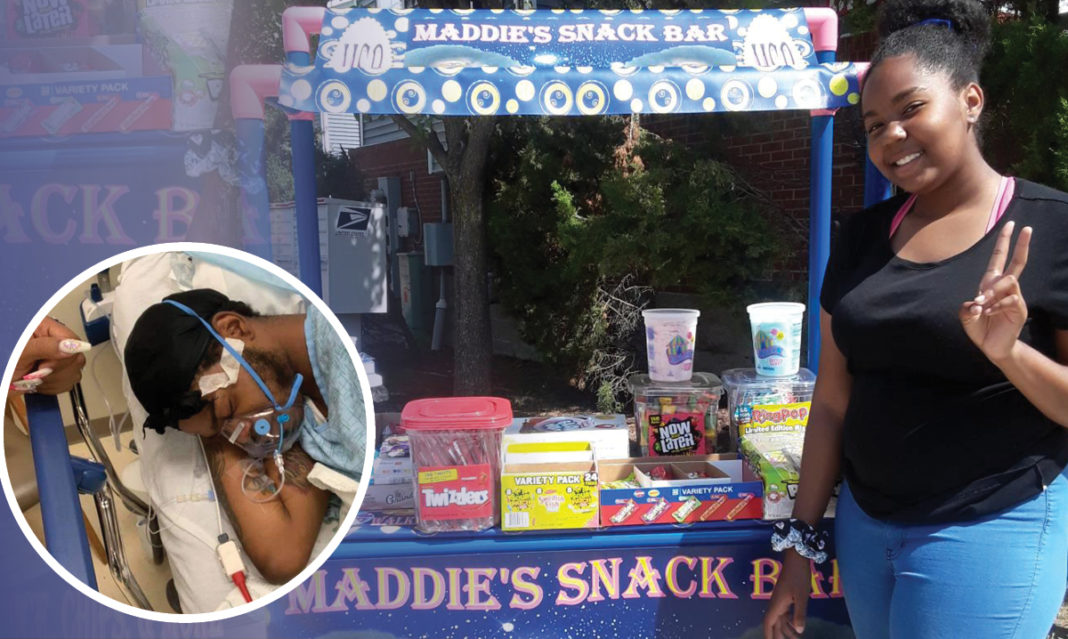 That’s one way to describe young humanitarian and entrepreneur Madison Hill, 11, of Detroit.

When the insightful preteen, who goes by Maddie for short, learned that a family friend was in desperate need of financial assistance for a life-saving medical procedure, she didn’t think twice about using the funds from her own business, Maddie’s Snack Bar, to help.

Maddie is raising money to help Shane McLean, 22, of Warren, who faces a daily painful battle with gastroparesis — the paralysis of the stomach, which causes nausea, malnutrition, malabsorption (can’t properly digest food), abdominal pain and other symptoms.

It caused Shane to lose 40 pounds in just a month and a half.

Maddie, who affectionately calls Shane her “big cousin” has raised over $1,000 that will go toward his medical expenses, which are upwards of $50,000 and not covered by his insurance.

“I wanted to give my proceeds to him because I used to just put my money in a savings account my mom and dad opened up for me, but Shane needed it more,” Maddie says, adding that she’s close with him and that they have a great relationship through their mothers, who are both friends.

For the past year Maddie wanted to start a business. With the help of her parents she opened her snack bar last July and business is booming.

From hot dogs and chips to cookies, smoothies and cold drinks, Maddie sells it all at her colorful stand, which was handcrafted by her dad, with a smile and a heart full of love.

“I always wanted my own snack shop and my parents opened the Snack Bar for me. It’s important to me (to sell), and I can help Shane’s life and I love him,” Maddie says. “He was in so much pain and I didn’t want to see him hurting. I just want him to be happy again.”

‘I appreciate it a lot’

Shane, a humble man of few words, doesn’t mince them when it comes to him expressing his gratitude.

“I appreciate it a lot,” he says of Maddie’s efforts. “I really honestly don’t know what to say. I am looking forward to (paying my medical expenses). I want to know what all can be done to help me.”

Medical intervention would involve a life-saving surgery that would fix Shane’s stomach lining and ultimately end his constant stomach pain.

His mother, DeShunda Keith, says that she feels great about Maddie’s selfless efforts.

“A lot of people have a lot of financial uncertainties and for those people to give — it really lets me know they care that my son lives and they are willing to make a sacrifice so my son can live another day,” she says.

“The best way I can describe Maddie is she is very energetic, compassionate, and she has a deep love for people,” Maddie’s mom, Maisha, adds. ” I’m very proud of Maddie. She wants to help whoever she can, and she can see things very clear for such a young age. Maddie hopes to one day be an attorney like her auntie. I admire her.”

You can catch Maddie at her snack shop 3-7 p.m. Mondays-Thursdays now through September on the corner of John R. and Harper in Detroit. You can also donate to help Shane through the GoFundMe his mom set up here.

For more stories about people helping people throughout our communities in metro Detroit and Ann Arbor, visit the Helper’s Series page at MetroParent.com.