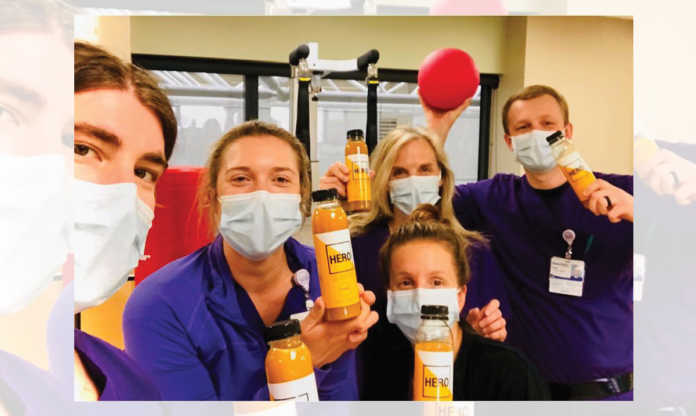 What happens when a few moms put their heads together virtually — because they can’t leave home — and start brainstorming ways to help those impacted by COVID-19? In the case of six Bloomfield Hills and Beverly Hills women, a lot of good happens.

The idea was simple: Collect monetary donations to purchase food from area restaurants and deliver those meals to the hard-working staff at local hospitals and medical facilities, who are overwhelmed with work caring for COVID patients.

Not long after, they applied to become a nonprofit organization and were granted 503(c) status — so donations to their cause are now tax deductible.

“During a time when so many of us were feeling helpless, we wanted to focus our energy and make a difference,” says co-founder Lindsay Pollina, a stay-at-home mom in Bloomfield Hills. “We aimed to collect donations from the community to help those on the front lines at the hospitals, while also benefitting our local restaurants.

“We got the idea from the original FLAG group in New Jersey,” she adds. “By that night, we launched our Facebook group and started spreading the word to our friends and other groups on social media.”

In the first three weeks, they raised $150,000 from a community of 21,000 Facebook followers and served more than 20,000 meals, according to founder Dani Gillman, a community activist from Bloomfield Hills.

Coordinating the process takes a lot of time, which is already at a premium for these women, many of whom are balancing working from home and family responsibilities.

Not that anyone is complaining. They are especially thankful to all those who have made financial contributions to FLAG and thrilled to see the positive response from struggling restaurant owners and from healthcare workers.

One hospital employee told FLAG organizers if it weren’t for their efforts, the hospital staff would be living on saltine crackers and Jell-O.

“The overwhelming gratitude of the front line workers and the restaurant owners is the most rewarding part of all of this,” says organizer Monica Toomey, who owns Ascend Equestrian and a virtual skincare business.

“The nurses give us a window into a world none of us can truly comprehend, but they share it with such conviction and compassion. They are the heroes, and we remain in awe of them daily.”

Organizer Lauren Edgell, an aerospace engineer who is working on rocket development and human space flight, adds that she loves hearing the relief and gratitude from the restaurant owners when she calls to place an order.

Cory and Jakki Zirbel own a Subway franchise in Royal Oak. Recently they filled an order for 700 sandwiches and delivered the food to some employees at Detroit Receiving Hospital.

“We cannot express the gratitude we have for FLAG,” the Zirbels say. “They provided our business the opportunity to keep our doors open, retain employees and contribute to the amazing front line workers in our community.

“It is such a great feeling to be able to be part of their movement. We honestly don’t know what the status of our small business would have been at this point without their support.”

Co-founders Pollina, Gillman, Toomey and Edgell are joined in their efforts by Laura O’Brien of Beverly Hills and Sarra Brinjikji of Bloomfield Hills. To learn more about the work of these six women, and how you can give involved, visit the FLAG of Metro Detroit website.