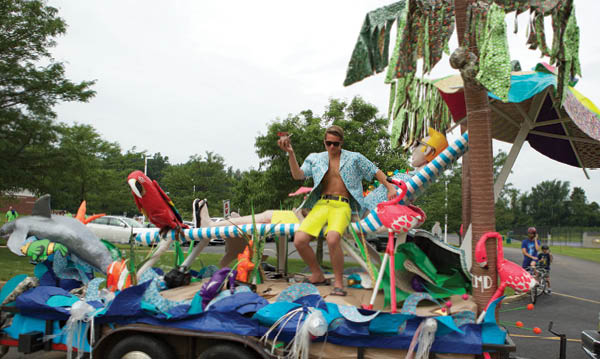 Growing up, duct tape came in one color – silver. Not anymore! Today, the kid in me still delights at finding psychedelic tie-dye duct tape sharing the shelf with Minions- and Hello Kitty-pattern varieties. And, of course, my own kids have discovered various stores feature different designs, so we’ve got to visit them all. There’s something about using the seemingly indestructible tape for craft projects that appeals to all ages. My daughter, 15, still asks for it for birthdays and now turns it into dresses, shoes and hats.

Avon is just off I-90 going east, about 30 minutes outside Cleveland and along the shores of Lake Erie. In the 2.5-hour drive from Detroit, review a little tape history with your kids. First: Some word-nerd trivia. Is it duct or duck?

Generically, it’s been spelled “duct” for a while. But “duck” isn’t wrong.

See, during World War II, soldiers needed a strong tape for their ammo containers to keep moisture out. The Johnson & Johnson company came up with the answer – a product with cloth on one side and a super-sticky adhesive on the other. The army-green tape was dubbed “duck” by soldiers who noted water rolled off it like a duck’s back.

After the war, the versatile tape was used by contractors for adhering various ventilation system parts – hence the name “duct” and silver color – though not anymore (hopefully, none of the kids are nodding off quite yet; almost done!).

One of its major makers decided the stuff might have a more colorful future and, in the ’80s, created branded “Duck” tape – and eventually set up shop in Avon.

This year’s Americana theme is a nod to the presidential election. Expect to see plenty of red, white and blue duct tape feature prominently in 25-plus floats. The procession steps off at 10 a.m. Saturday, June 18 from the city’s high school (there’s music at the main stage the night before). Once your kids are duly inspired, they can make their own duct-tape creations at the craft tent.

The same day, don’t miss the 1 p.m. fashion show, revealing just how creative you can get with a roll to create everything from a ruffle to a whole dress.

Throughout the day, bands serenade festivalgoers and there are plenty of food booths along with carnival games and rides (bring cash for ride tokens and food).

Had your fill? You’re just a 10-minute drive from the Lake Erie Nature & Science Center. The 22,500-square-foot center has a live nine-foot boa constrictor and a bald eagle, education exhibits and a planetarium. It’s free with nominal costs for star shows.

Need to blow off steam before that car ride back? Try Bleser Park, just northwest of the start of the parade for a 12,000-square-foot playground and picnic tables galore. Farther south, Crocker Park is an outdoor shopping area with plenty of green patches where kids can play in between ducking into stores like Gymboree and Learning Express.

Still hungry after the fest? Here’s where to refuel in the Avon, Ohio area.