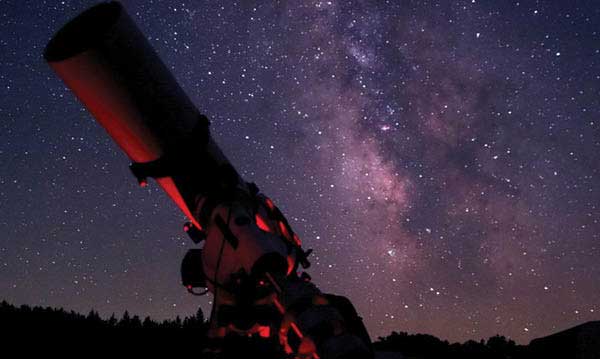 Michigan really embraces stargazing. Back in 1993, the state began setting aside public land with strict lighting policies so amateur astronomers could have a better view. In fact, we’re home to the nation’s first “dark sky preserve” – that’s Lake Hudson State Recreation Area in Lenawee County – and we continue to create wonderlands where visitors can escape light pollution and have a clearer peek into the heavens.

While not officially listed by the International Dark-Sky Association, this spot serves up some fantastic views. Located in Clayton, a little over 90 minutes southwest of Detroit, it spans 2,796 acres, offering semi-modern camping and spots along the beach where you can sky sleuth for the Big Dipper, Sagittarius and more.

Jason Stein, who works here, suggests families visit Aug. 12-13, when a meteor shower smatters the sky with a natural fireworks display. “We have a lot of people who come out with their telescopes, but you can still see plenty of stars without one.”

Jutting into Lake Michigan just west of Mackinaw City, Headlands International Dark Sky Park seems custom-designed by Mother Nature for star watching. With soft lakeside beaches stretching into forest, this haven’s trees act as insulation to the outside world. The park just unveiled a new waterfront event center and observatory dome in June. Find programs in the outside amphitheater – plus all-hours restrooms. The park is open 24/7/365 with free admission (no camping). “I recommend families hike the trails here by day and stay to stargaze at night,” says program director Mary Stewart Adams. “We have a variety of programs available.”

Cherry Springs State Park in Pennsylvania is the globe’s second official International Dark Sky Park, boasting exceptional views, educational programs – and community support in keeping outside lights low. Positioned in the expansive Susquehannock State Forest in the northern part of the state, it’s known as one of the region’s best places for stargazing. Head to the aptly named Astronomy Field to enjoy a 360-dgree view of constellations above. dcnr.state.pa.us.